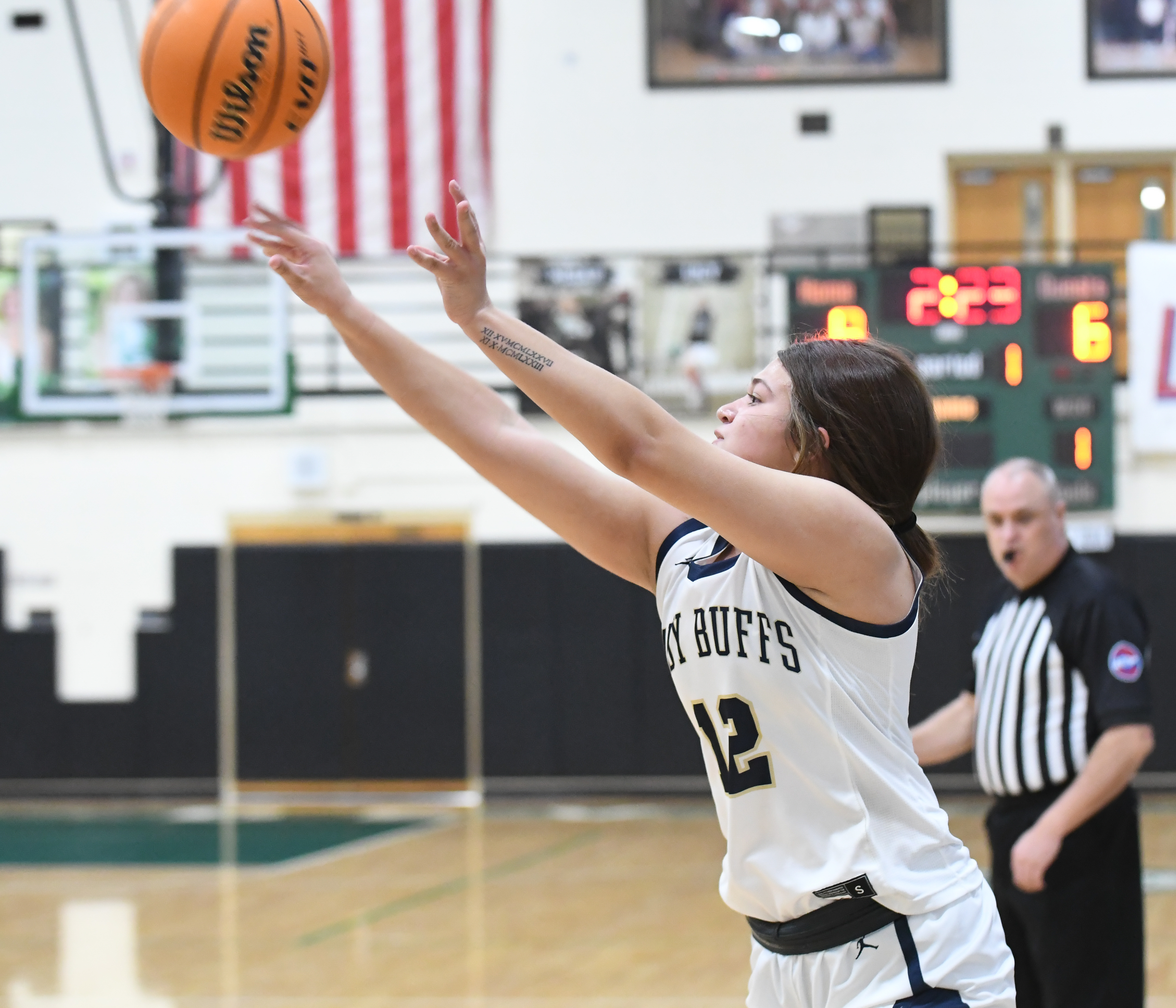 West Greene caught fire from behind the arc on Friday morning and finished its time in the Andrew Johnson Bank Ladies Classic with a 55-54 win over Chuckey-Doak.

“We finally made our shots. We’ve had a long stretch of rough shooting, so it was good to see us make that many shots,” West Greene coach Betsy Shaw said. “I don’t know that we have ever shot that high of a percentage from three. Chuckey-Doak is tough, and I knew they would make this a close one, but the girls did a good job of finding a way to win.”

The Lady Buffaloes shot 49 percent from the field and 59 percent from beyond the arc while sinking 13 three-pointers in the win. Breanna Ellis hit four of those bombs and scored 14 points. Hailey Ripley hit four triples to score 12 points, and Madi Brown hit two three-pointers as part of a 14-point, 10-rebound day. Maddie Bryant also connected from deep three times.

“We had different people step up today,” Shaw said. “Hailey isn’t normally a scorer and Bre doesn’t normally score that much. Madi had a double-double, and Taylor Lawson did a good job rebounding. Maddie Bryant even stepped for us. I feel like Chuckey-Doak was going 20 players deep, and we don’t play that many, but I feel like everybody stepped up and helped us today.”

Friday marked the third time West Greene and Chuckey-Doak have met this season, and Chuckey-Doak took each of the first two, so Shaw hopes that the win can be something her squad can build on as they head into the second half of the season.

Friday’s fourth quarter started with Chuckey-Doak leading 42-40, and that grew within the first 30 seconds when Taliah Johnson forced a turnover that Saniah Atchison turned into a driving layup.

With 4:45 left Ripley started West Greene’s rally with a triple, and Ellis followed with two more deep shots to swing the lead in West Greene’s favor at 52-48.

Ellis hit from deep in the corner to make the score 55-50, but Chuckey-Doak was not done. With 10 seconds left Atchison made it a one-point game with a three-pointer from the left side, and then the Lady Knights forced a turnover with seven seconds on the clock.

With time winding down the Lady Black Knights had to settle for a physically contested shot that did not make it to rim.

Friday’s action started with West Greene taking a 13-10 lead behind eight points from Brown in the opening period.

Two minutes into the second quarter the lead grew to 21-12 with Ripley sinking two triples to lead the way.

Tavyn Southerland and Atchison followed with buckets for Chuckey-Doak, and after Kennedy Brown made a free throw West Greene’s lead was down to 24-21.

With 57 seconds left in the first half Atchison drove the length of the floor and dished to Brown for a layup that pulled the Lady Knights to within two points at 28-26, but West Greene led 30-26 at halftime.

Chuckey-Doak started the third quarter on a 12-3 run to take a 38-33 lead. Faith Yokley scored four points in the stretch while Atchison and Courtnee Jones each hit three-pointers.

Bryant tied the game at 38-38 when she knocked down a straight-away trey, but after baskets by Jones and Kylie Malone the period ended with Chuckey-Doak leading 42-40.

North Greene put together a fourth-quarter rally on Friday that came up just short against University School of Jackson in the Andrew Johnson Bank Ladies Classic, and the Lady Huskies fell 49-44.

The fourth quarter started with the Lady Bruins leading 43-34, and that grew to 45-34 on a putback by Carly Hays.

North Greene scored the next 10 points to make it a one-point game with 1:38 left to play. Zoe Sanders got in the paint and drew contact to earn two trips to the foul line that netted three points. Wagner scored three points as well before she pulled up for a jumper from the left elbow to cut USJ’s lead to 45-44.

The Lady Huskies had a chance to take the lead on the next possession, but they could not get a shot to fall in the closing stretch.

In the first quarter the Lady Bruins took the lead using the three-point shot. They connected on four of them to take a 14-11 lead. Eighth-grade phenom Haylen Ayers sank three of them and finished the night with 27 points for USJ.

Three minutes into the second quarter Cambell Gaby was able to hit two free throws to tie the game at 18-18, and when Sanders hit a trey from the left wing North Greene led 22-20.

In the third quarter Ayers scored eight points for the Lady Bruins while Sanders hit from deep twice for North Greene. USJ was able to stretch its lead to 43-34 in the quarter.

The South Greene girls ran out of gas in the second half on Friday and fell to Mercer County (Ky.) 65-56 in the Andrew Johnson Bank Ladies Classic.

Through most of Friday’s first quarter the teams traded buckets, but with 25 seconds left Jordyn Roderick knocked down a three-pointer to put the Lady Rebels in front 13-10.

The  advantage grew to 17-12 after Roderick and Hailey Brooks each drove the lane for layups.

Mercer County went in front at 18-17 when Anna Drakeford went coast to coast for a lay in. Drakeford then scored six unanswered points for a 25-19 lead.

Over the final minute of the first half South Greene scored seven points with Arianna Hoese sinking a turnaround jumper from the lane with five seconds left to put the Lady Rebels on top 28-27.

Ryleigh Gregg started the  third quarter with a pair of triples for South Greene as the lead grew to 34-27, but then Teigh Yeast hit two deep shots for the Lady Titans that make it a one-point game again.

Yeast scored 11 points in the period as Mercer County took a 53-45 advantage into the final frame.

Drakeford scored the first four points of the fourth quarter as Mercer’s lead stretched to 57-45.

With 1:19 remaining South Greene got within five points when Brooks slashed through the paint to make the score 61-56, but those were the Lady Rebels’ final points.