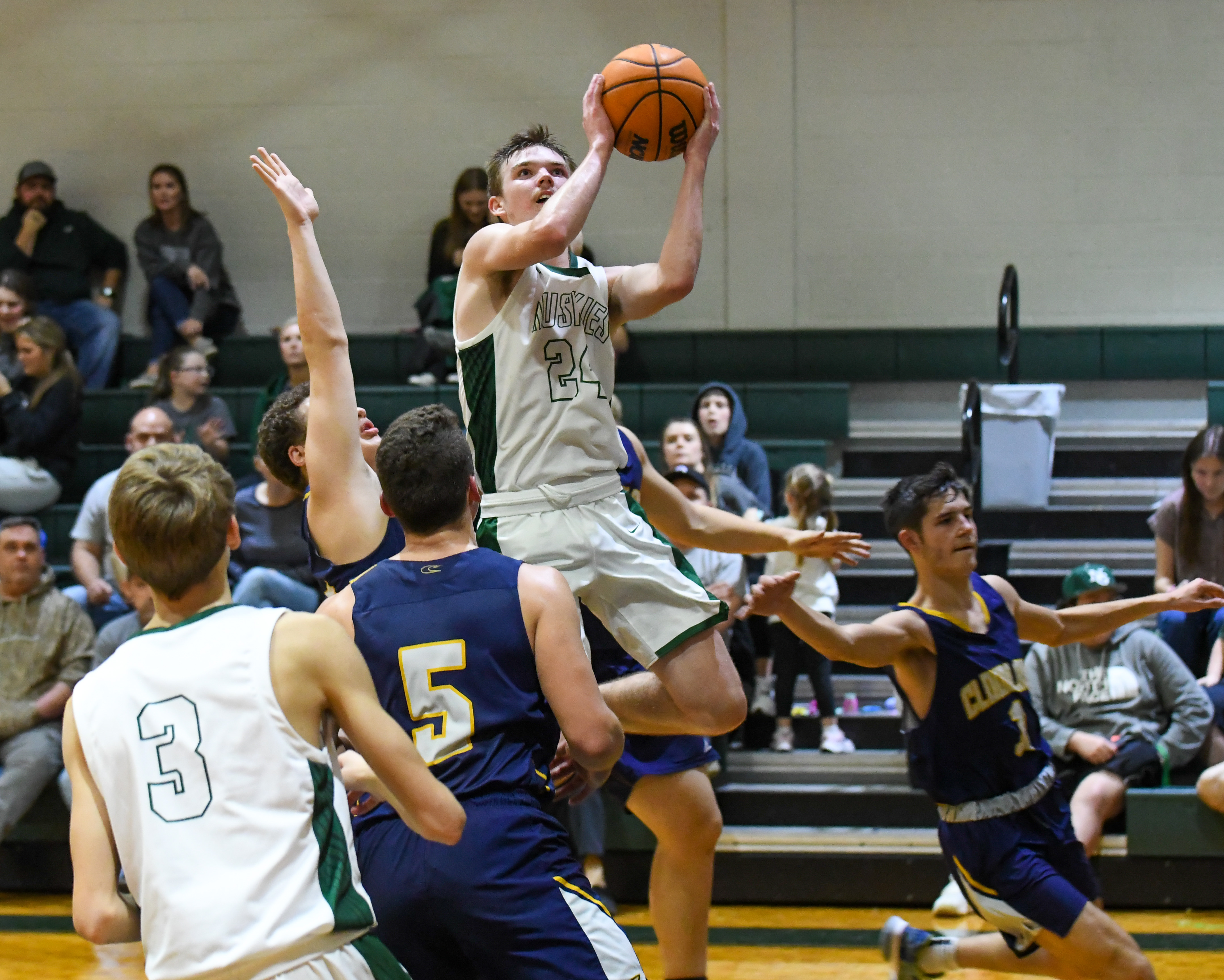 Cloudland took its best shot at shutting down North Greene’s Jason Britton on Friday night, and early on it did as good of a job as anyone at slowing the All-State guard. But ultimately it did not matter as the Huskies improved to 2-0 in District 1-1A play with a 56-39 win over the Highlanders.

“I think this will be a learning experience for us. We knew the box-and-one was coming at some point,” North Greene coach Sam Tarlton said. “We did much better with it in the second half. Once they just settled down and were patient things went better. We have other kids that can score, and just slowing down helped them.”

The Highlanders came out in a box-and-one defense and assigned Cayden Cook the task of clinging to Britton all night long. The strategy worked and Britton was held to just five points and three shots in the first half. But the other Huskies stepped up and North Greene was able to play from in front.

On the night North Greene got points from nine different players, led by Britton who finished with 18 points, while only three Cloudland players found the bottom of the net.

“When we have been our best we are putting two or three in double figures, but lately we have been a little one dimensional,” Tarlton said. “We want other guys to be aggressive, but we don’t have a lot of guys with that scoring mentality. We have a lot of good players, the JV team is 12-0, and it’s the same kids. They are still young and growing up, but by then end of year they will be alright.”

The action started back and forth with North Greene holding an 11-10 lead after one quarter of play. Cook and Ryan Sexton both knocked down three pointers for Cloudland while Bennett McLain scored four points four points for the Huskies. After North Greene grabbed two offensive rebounds Britton was able to find enough space to close the period with a three pointer.

The Highlanders took the lead again at 20-16, but Brody Franklin got North Greene going again with a triple. Britton then powered in layup from the right block with 2:08 left to give the Huskies a lead it would never relinquish.

Lance Carico finished the half with four points for North Greene as its lead reached 25-20 at halftime.

In the second half North Greene got Britton a few opportunities in transition, and that started with him making his own chance by taking a steal the other way for two points.

McLain pushed North Greene’s lead to 31-22 midway through the third quarter when he sank a turnaround jumper from the right block.

Britton made it a double-digit lead at 38-27 when he went the length of the floor for a layup. North Greene went to the fourth quarter leading 40-29.

The teams exchanged baskets early in the final frame, but in a 40-second stretch Dennis Malone and English both hit from three-point range for North Greene to stretch the lead to 52-37.

English then put back a miss after Britton stole the ball on the baseline before Tarlton let his bench finish out the contest.

The North Greene and Cloudland girls got into another nip and tuck battle on Friday night. Both teams knew what the other wanted to do every step of the way, but ultimately Cloudland was able to make a few more stops to earn a 36-32 win on the road.

“Who knows, we might play three or four times this year. Round one goes to the Highlanders, round two is to be determined,” North Greene coach James Buchanan said. “There’s so much familiarity with our teams. We tried to collect five or six game films, but if you’ve seen Cloudland once you’ve seen them a 1,000 times. These girls have played against each other for a long time. They have three seniors and two juniors who have played a lot, and our seniors have been a part of our rotation for a long time. These girls know Cloudland so well they may as well have sleepovers with them. Then as coaches I feel like we could call each other’s plays. So you put all of that together and you get 36-32, typical North Greene, Cloudland.”

The Lady Huskies went into the second half leading 24-19, but took almost three minutes to score their first points of the third quarter when Sonya Wagner put her head and drove to the hoop. With 4:43 left in the period Grace Buchanan sank a pair of free throws, but that was all the scoring North Greene could muster in the period.

On the other end of the defensive struggle Cloudland’s Izabella Christman made a pair of turnaround jumpers from the paint to tie things at 28-28 heading into the final frame.

Miscues proved costly for the North Greene early in the fourth quarter. Cloudland took its first lead of the night with 6:11 left when Ella Benfield picked up a loose ball and took it the other way for a layup. Next it was Saharra McKinney who stole an errant pass into the paint and went the distance to put the Lady Highlanders in front 32-28 with 5:47 left to play.

Despite that North Greene’s defense was good enough in the half court to hang tough even when the offense was not finding good looks.

With 1:26 left to play Zoe Sanders hit a pair of free throws to make it 34-32, but North Greene was not able to get anything else to fall.

Friday’s action started with North Greene scoring the first eight points, and Sanders scoredfour of them.

Sanders led North Greene with 12 points on Friday, and after battling an ankle injury all year she looked to be much closer to 100 percent.

“She is getting close,” Buchanan said. “Now that we see her energy coming back, we are seeing we can use her in different way on defense and that will be just an added bonus.”

Grace Buchanan pushed North Greene’s lead to 14-6 when she sank a triple from the right corner, and then Sanders closed the first quarter with a step-back three that gave the Lady Huskies a 17-6 lead.

In the second quarter Cloudland’s Ryan Turbyfill hit a three-pointer to close the gap to 20-13. Back to back buckets from Christman brought the Lady Highlanders to within two points at 21-19, but again Sanders beat the buzzer with a trey to put North Greene up 24-19 at halftime.