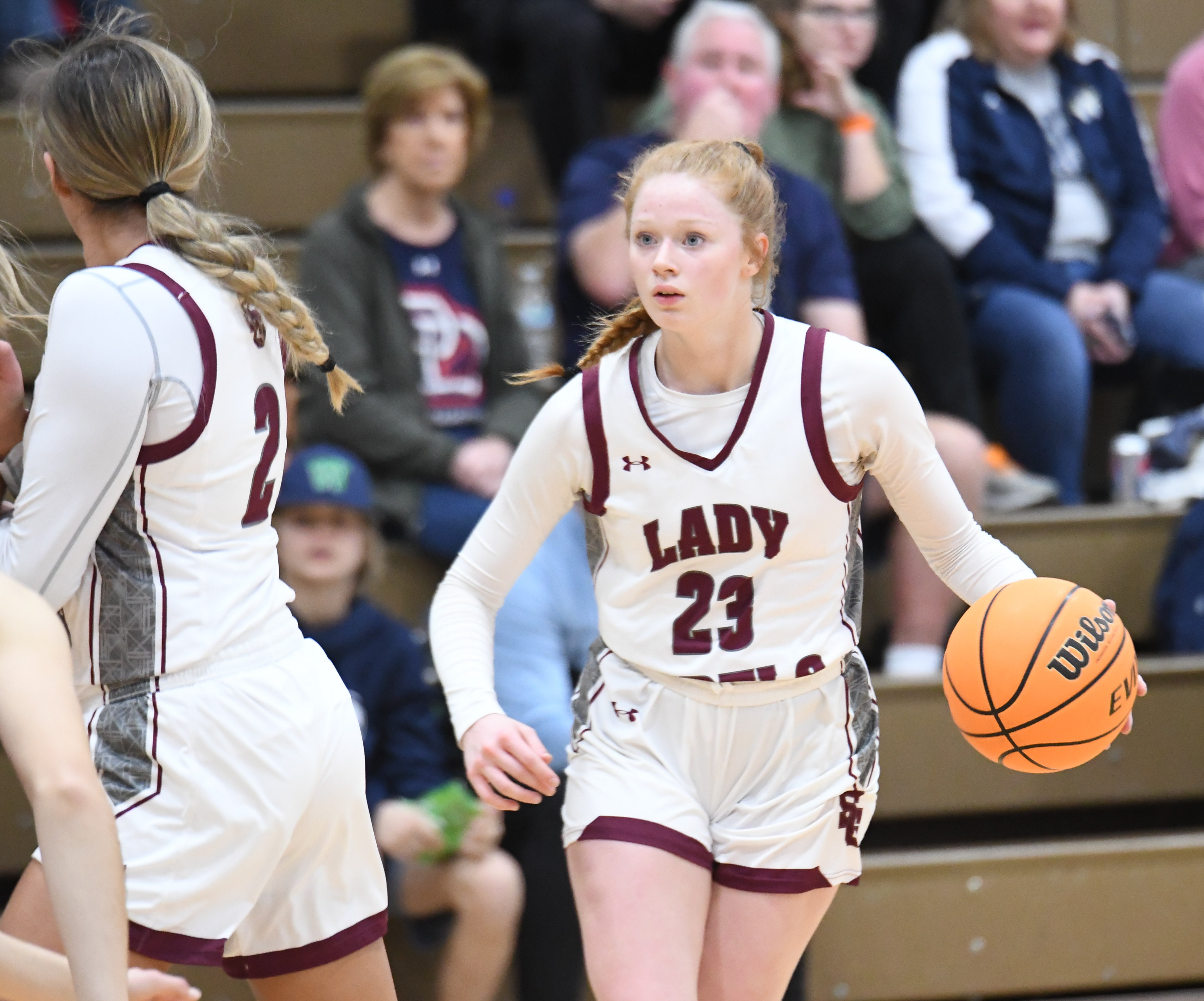 Hampton overcame a 13-point first quarter deficit on Tuesday night to knock off South Greene 55-53 and remain unbeaten on the season.

“Hampton is a good team that speeds you up and makes you plays faster than you want to. They make you feel uncomfortable and that leads to poor shot selection a lot of times,” South Greene coach Stephen Gregg mentioned. “It was a good environment in here tonight and I hate to lose a close one.”

South Greene controlled the scoreboard for majority of the contest but saw the lead slowly slip away in the opening stages of the fourth quarter. The Lady Bulldogs outscored them 17-11 in the final eight minutes and forced a crucial turnover with five seconds left that put the Lady Rebels in a tough position with no timeouts left.

A last second heave at the buzzer would be way off the mark and the Lady Bulldogs would escape with a win and sweep the season series over South Greene.

From the tip-off, Hampton gained the first lead of the night by way of Taylor Berry laying the ball in after Madison Hensley was tripped up under her own basket and lost possession of the ball on a rebound.

Ryleigh Gregg responded with a three-pointer on a quick inbounds play and Jordyn Roderick followed suit with a triple of her own.

Berry lined up from way downtown and bucketed a deep three-point shot. Gregg quickly sprinted down court behind the defense and laid in a transition basket on a back door cut. South Greene jumped out to a 10-5 lead.

Hailey Brooks proved her value on both ends of the court on two successful possessions. She ripped down a rebound on defense and ran coast-to-coast before being fouled at the rim and earned two free throws. Both shots would fall. Another coast-to-coast trip down the floor earned her a chance at a three-point play with a foul being added on to a made layup. Brooks gave South Greene a 5-0 run by herself and the spark they needed to pull ahead by double digits.

Jordyn Roderick capped off her quarter with a layup and finished with seven points in the first. Brooks also provided seven in the opening quarter.

“They played with some extra excitement tonight,” Gregg stated.

The Lady Rebels held a 21-8 lead after eight minutes played.

Hampton would start gaining ground early in the second with a three-point basket from Madison McLain and two layups from Macy Henry and Linsey Jenkins to pull within 24-18.

A scrum under the basket occurred with many players getting tangled up grabbing for the ball. Hailey Brooks would manage to kick it out to Jordyn Roderick for a three-pointer.

Taylor Berry cut into the lead with a free-throw line jumper.

Piper Helle made a trip to the rack ahead of everyone on defense and notched an easy layup to set the tempo for Hampton.

Helle rebounded a missed free throw and made the most of her efforts by putting it back off the glass for two. The Lady Bulldogs cut the deficit down to 36-31.

South Greene responded sharply when Hailey Brooks nailed a step back mid-range and Madison Hensley cooked the defense for a layup to push the lead to 40-31.

Linsey Jenkins poked the ball away and gained a layup next for Hampton. Madison McLain didn’t have much time left on the clock to find a better shot and heaved up a long three-point shot that fell through the nets as time expired to give the Lady Bulldogs all the momentum heading into the fourth quarter trailing 42-38.

Kortnei Bailey had been quiet all game until the fourth quarter when she dropped two points through the net on a tough layup on a difficult angle.

Hampton clawed their way back and tied the game when Taylor Berry got a layup to fall off the glass. Both teams would take turns trading leads all the way up until the end with five lead changes in the fourth.

Bailey regained the lead for South Greene with another layup in the paint. Hailey Brooks gave South Greene more of a cushion with a long two-point basket to go up 48-45.

Macy Henry’s layup underneath gave control of the lead back to Hampton before Madison Hensley splashed a three-pointer to sway the lead back in South Greene’s favor 51-49. Hensley bounced a pass between two defenders to Jordyn Roderick for a shot off the glass and the scoreboard would read 53-51.

Taylor Berry lowered her shoulder and created enough space to lay the ball softly off the glass and tie things at 53-53.

Bad breaks would fall South Greene’s way with a late foul on Macy Henry that allowed the junior to knock down a free throw and take the lead with five seconds left. The Lady Rebels would have to move the ball the length of the floor with no timeouts.

A costly turnover on the inbounds pass allowed Linsey Jenkins to grab the ball and seal the deal with one last free throw to put the final touches on a 55-53 victory.

“You’ve got to have a shot at the end. We had the ball inbounding with no timeouts left. But you’ve got five ticks on the clock. We’ve got to get it in and take four dribbles up the floor and get a shot off,” Coach Gregg said. “These games will test you for the postseason. I just hate that we’re coming up short in the close games but we got to grow.”

The Hampton boys started out slow, but found its rhythm in the second half en route to a 63-52 win over South Greene on the road.

“We played a really good team. I told the boys that bunch is probably going to be in the state tournament. We had twenty something turnovers and you can’t beat good teams like that if you’re going to give them the ball twenty something amount of times and giving up possessions,” Rebels Head Coach Terry Hoese said.

Both teams struggled to put the ball through the hoop in the first quarter as both teams combined for only 13 total points.

TJ Buckner had one of his best nights in a South Greene uniform contributing on offense, defense, and being the best rebounder on the floor. He provided instant defense by blocking Hampton’s first shot of the night. Buckner also scored the Rebels’ first two points with a free-throw line jumper.

Geno Carrico cut inside the lane for a layup and Hayden Campbell used a smooth spin move in the paint to free up enough space to knock down a two-point shot.

Hampton led 8-5 after the first.

Buckner rose up and laid in another two points for the Rebels. Campbell used another post move in the paint to add another bucket.

Conner Marshall scored on a fast break trip down the floor next for South Greene.

Chance Point stripped the net on a free-throw line jumper to keep Hampton in front.

TJ Buckner used his athletic ability and size to rise up above his defender and lay in a tough layup to counter attack. He’d grab a rebound on offense and put it back off the glass for two more soon after. Buckner picked off a pass on defense next and fired it ahead to Jase Roderick for an assist.

“TJ doesn’t even know how good he can be. There were times tonight where he caught the ball in the paint and turned around and just decided he was going to go score and he’s capable of doing that,” Hoese mentioned “He’s having a good year and that’s several games in-a-row now where TJ’s produced.”

The Bulldogs pulled away going into the break with layups from Cadon Buckles and Chance Point. They’d hold a 23-16 advantage at the intermission.

Hampton caught fire out of the half with two three-point buckets from Michael Anspaugh to heighten their lead to 31-18. Buckner produced another layup in the paint before Anspaugh drained another triple, his third in the quarter.

“It’s hard to dig yourself out of those holes when you’re playing good teams. We didn’t shoot it well we only scored 16 points in the first half. I felt like we played great defensively. We held them to 23 in the first half,” Hoese said.

Buckner answered back with yet another lay in off the backboard.

Buckles downed his first three-pointer of the night and the Bulldogs led 46-28 heading into the final quarter of play.

Anspaugh was red hot again with two more threes in the fourth quarter. He’d make five shots from outside the arc.

Going into the fourth quarter, the deficit for the Rebels sat at 18 points. With a no quit attitude they managed to score more points in the fourth quarter, 26, then they had the entire first half to make it an eight-point deficit with a minute left to play.

Jase Roderick’s fadeaway in the paint started the late-game run. Cooper Kelley followed up with two three-point bombs from beyond the perimeter to give South Greene life.

“When he’s making shots, we can stay in games,” Coach Hoese bragged.

Conner Marshall strongly pulled down an offensive rebound and went back up for a tough layup. TJ Buckner stole the ball and delivered another assist to Kelley on a transition layup.

Andrew Thornburg splashed a three-point basket to cut the deficit to 58-50. Another late three-point play by Thornburg on an and-1 kept them in the ball game, but Hampton stayed persistent at the free throw line and managed to pull away to victory 63-52 in the end.

“Shoutout to them they’re good. They’ve got several kids on the team who can score and they did tonight,” Coach Hoese stated.