Hampton Gets Pair Of Wins Over Huskies In The Den 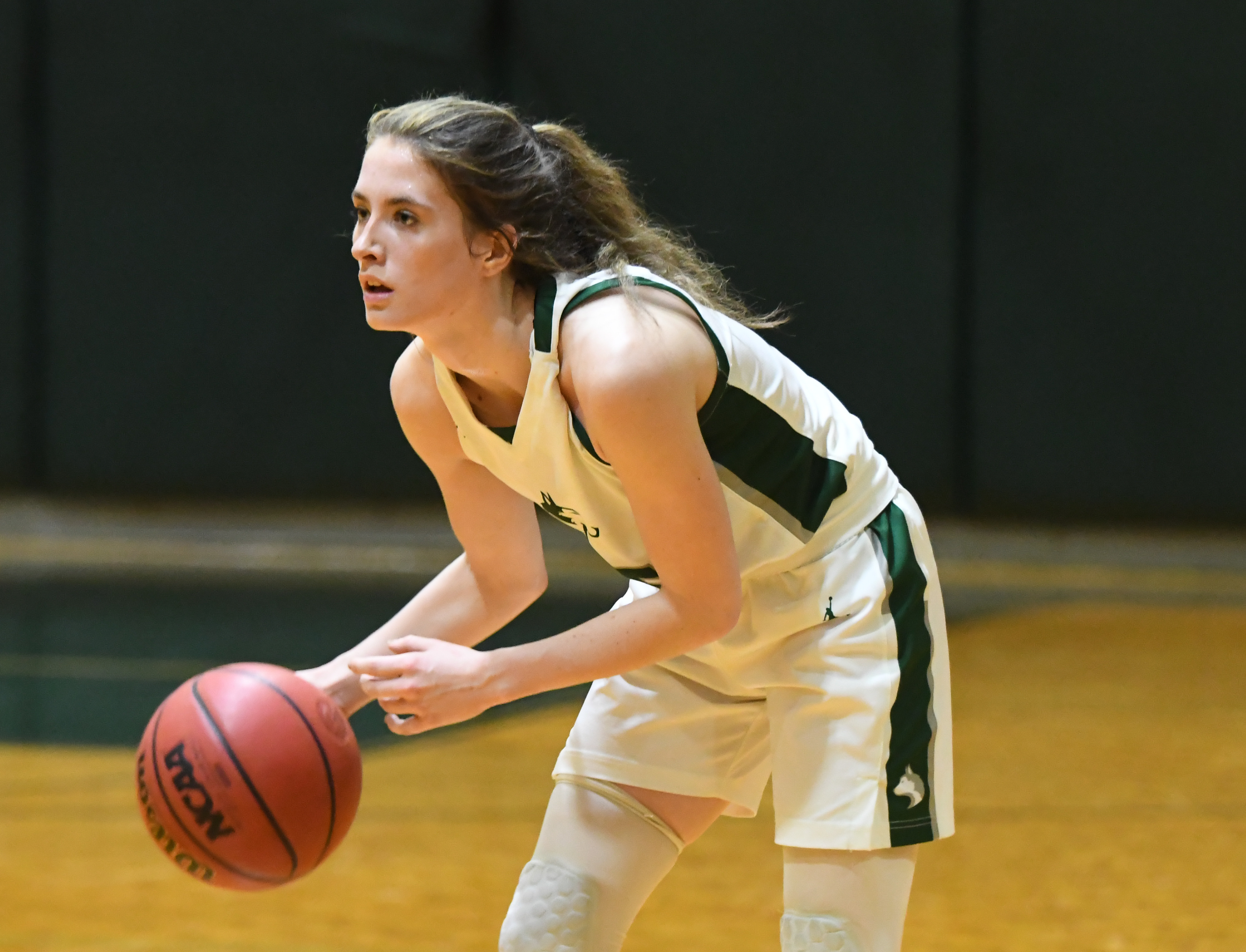 Hampton Gets Pair Of Wins Over Huskies In The Den

The Hampton girls survived a late game push from North Greene to earn a hard-fought 51-45 win inside The Huskies Den to remain undefeated in their 2022-23 campaign.

The Lady Huskies gave them all they could handle nipping at their heels the entire game until a clutch defensive stand with less than a minute to go sealed the deal.

Madi McClain’s 14-point effort combined with Macy Henry’s three triples from beyond the arc helped will the Lady Bulldogs to a victory. Sonya Wagner did all she could to keep the Lady Huskies in contention with a 17 point and 12 rebound double-double.

Haley Bailey got the first shot of the night to fall, but Madison McClain scored five-straight for the Lady Bulldogs to shoot them in front 5-2. After McClain’s buckets, Hampton would hang on to the lead and never surrender it.

Macy Henry and Taylor Berry both drained three-pointers for Hampton and before you knew it the score jumped to 14-2.

Zoe Sanders knocked down a couple of free throws along with one from Haley Bailey to give North Greene some offense to end the quarter.

Hampton showed their dominance early and held a 16-5 lead after one quarter.

North Greene always finds a way to stay competitive with their competition on their home court and slowly started reeling Hampton back in. Sonya Wagner helped cut into the deficit with two floaters in the paint and a pair of free throws.

Piper Helle drained a three-point shot to put a stop to their run. Linsey Jenkins proved to be a difference maker on both ends of the court for the Lady Bulldogs with two blocks at the rim and a three-point stretch to help pull them ahead 24-13.

Mercy Buchanan got fouled hard on a trip through the lane and got the layup to fall through contact to give her a chance at a three-point play the old-fashioned way. The free throw would sink through the net and cut the lead back down to single digits.

Zoe Sanders fired away from long range and splashed a three-point bucket to help knock North Greene’s deficit down to 24-19 entering halftime.

The Lady Huskies scored on their first possession to start the second half, but had to put up three shots before finally seeing one fall through the net. Sonya Wagner was dominant on the offensive glass all night and scored a layup after ripping one down to pull North Greene within three points.

“She’s really been valuable to us because of that and giving us extra opportunities,” Buchanan stated.

Hampton responded well with a 7-0 run to climb back on top by ten points. Macy Henry found her range again with another three-point basket and Taylor Berry got a running floater to fall. Piper Helle sprinted down the floor for a wide-open layup after a steal and the scoreboard suddenly read 31-21.

Zoe Sanders put the Lady Huskies back on the board and Grace Buchanan knocked down a three-point bomb to bring some confidence to North Greene.

The third quarter ended with Hampton holding on to a 33-29 lead.

Both teams traded runs in an up-and-down fourth quarter. The Lady Bulldogs produced the first run with a floater from Linsey Jenkins and a layup by Madi McClain.

Sonya Wagner scored quickly on an inbounds play under the basket and added another rebound to her total that was a part of an offensive put back that cut the score down to 38-35.

Sometimes a play doesn’t go exactly as planned, but still ends with two points on the board. Zoe Sanders fired a long cross-court pass to Grace Buchanan that got tipped and gave Hampton time to recover on defense. Haley Bailey made the smart decision to cut to the basket and received a crisp bounce pass from Buchanan and finished for a layup.

Hampton’s press defense always creates issues for opposing offenses and is a key to their success. Taylor Berry proved that with a layup after intercepting a Lady Husky pass.

“We knew with the relentless pressure like they give we wanted to keep those turnovers at twelve or below I don’t know if we hit that or not,” Coach Buchanan mentioned. “That’s what it’s going to take to beat them.

Sonya Wagner positioned herself for another offensive rebound and earned a trip to the line with a foul. Both free throws would find the bottom of the net.

Macy Henry drained her third three-ball of the game late in the fourth to help Hampton extend their lead.

Wagner stole the ball and connected at the hoop for a three-point play with a layup and a free throw at the charity stripe. The score sat at 45-42 with 1:44 left in the game.

Henry and Wagner both dueled it out down the stretch as Henry responded to Wagner’s layup with one of her own. The Lady Bulldog press made North Greene uncomfortable enough to force a turnover in the late stages on a crucial possession. Piper Helle went one-of-two from the line.

Grace Buchanan wouldn’t let the Lady Huskies go down without a fight after clutching up with a big three-point bucket to bring them back within one possession at 48-45.

Two free throws from Madi McClain and Piper Helle’s block with six seconds to go sealed the deal and helped power Hampton to another win. The Lady Bulldogs survived a late flurry to come out on top 51-45 to stay unbeaten and earn a key conference victory over North Greene.

“We’ll try to regroup and learn from it. We’ve got to play them again at their place so hopefully it’ll go a little better next time,” Buchanan said.

Hampton improves to 3-0 in District 1-A play as North Greene falls to 1-2.

Hampton’s second half surge proved to be too much for North Greene as the Bulldogs prevailed 68-52 over the Huskies in Friday's nightcap.

Four double-digit scoring efforts, including a game-high 23 points from Caden Buckles, helped Hampton secure their third conference win of the year to put them atop the District 1-A standings. North Greene falls to sole second place with a 2-1 conference record.

It was a back-and-forth affair for the whole first half with eight lead changes. Caden Buckles got the game going with his patented mid-range jump shot.

The Huskies took their first lead of the game with Jason Britton nailing a floater in the paint and Lawson Davenport splashing a three-pointer on the wing. Britton knocked down a three-point bomb off a screen to put North Greene at an early 8-4 advantage.

Geno Carrico and Bennett McLain traded layups in the paint. Hayden Campbell and Geno Carrico added two baskets to tie things up at 10-10.

Sam English’s layup broke the tie until Michael Anspaugh’s three-point shot put Hampton back in front. The Bulldogs led 13-12 after the first period.

The first six field goals of the second quarter saw six consecutive lead changes with a trade of the lead occurring after every bucket.

Jason Britton scored on a layup to take the lead back into the Huskies favor. Chance Point’s offensive put back regained the lead for Hampton until Bennett McLain knocked down a pair of free throws.

Caden Buckles came away with a steal on the defensive end and gave the ball up to Dylan Trivett for a layup inside the paint. Britton tied the score at 17-17 with a free throw and Dennis Malone notched a reverse layup to put North Greene in control 19-17.

Anspaugh got another three to fall with a soft bounce on the rim for the final lead change of the quarter.

The paint was where most of the points were found during the late stretch of the half with Buckles, Luca May, and Hayden Campbell finding success at the rim.

Michael Anspaugh nailed his third three-point dagger of the half on Hampton’s last possession to help grow their lead to 29-24 entering the break.

“I thought we played a great fifteen minutes and forty seconds. We were executing what we were trying to do. We were handling the ball in the press. Only thing I didn’t think we did is we had several chances early to connect on layups down there and we didn’t. Against a team right now that is a little bit better than you, you have to connect on those,” North Greene Coach Sam Tarlton said.

Sam English came out of the locker room and drained a triple from outside the perimeter, but after that it was all Hampton until the final buzzer sounded.

Quick trips down the court ended with back-to-back layups by Chance Point. Anspaugh torched the nets for his fourth trey of the game to put the Bulldogs in steady control with a 38-27 lead.

Bennett McLain sent a smooth hook shot through the net and Jason Britton’s catch-and-shoot three cut the lead down to seven points.

Caden Buckles took over on both sides of the ball with an and-1 at the rack then stole a pass mid-air and pulled up in the paint for a quick mid-range basket.

Jason Britton did all he could to will the Huskies back into the game with a tough jump shot over two defenders. He finished with a team-high 21 points.

“Against a team that good we got to have the others and we’re still waiting on them,” Tarlton said.

Chance Point buried a three-point bucket from long range and Hampton remained in control 51-40 going into the final eight minutes of play.

The Bulldogs sent a message to begin the fourth with Buckles and Anspaugh downing layups to begin the quarter. Geno Carrico finished a tough play at the rim with a foul and completed the three-point play.

Anspaugh stole a pass in press defense and dished the ball off to Buckles for a pull up in the paint to put enough distance between them and North Greene to be able to coast to the finish.

Hampton knocked off the Huskies 68-52 to put them alone at the top in the District 1-A standings.

“They’re tough. If you get a rebound you have to chin it, you can’t get it smacked out of our hands and that happened several times. You catch it in the middle of the press you have to fake a pass to make a pass,” Coach Tarlton mentioned. “It’s all those little things that are on our sheet and that are on our scout that we say to do. We’re just not old enough and grown up enough to do it yet. We’re hoping by February that’s the case but right now they’re better than us.”

Jason Britton poured in 21 points with Sam English and Bennett McLain each contributing with 8 points each.