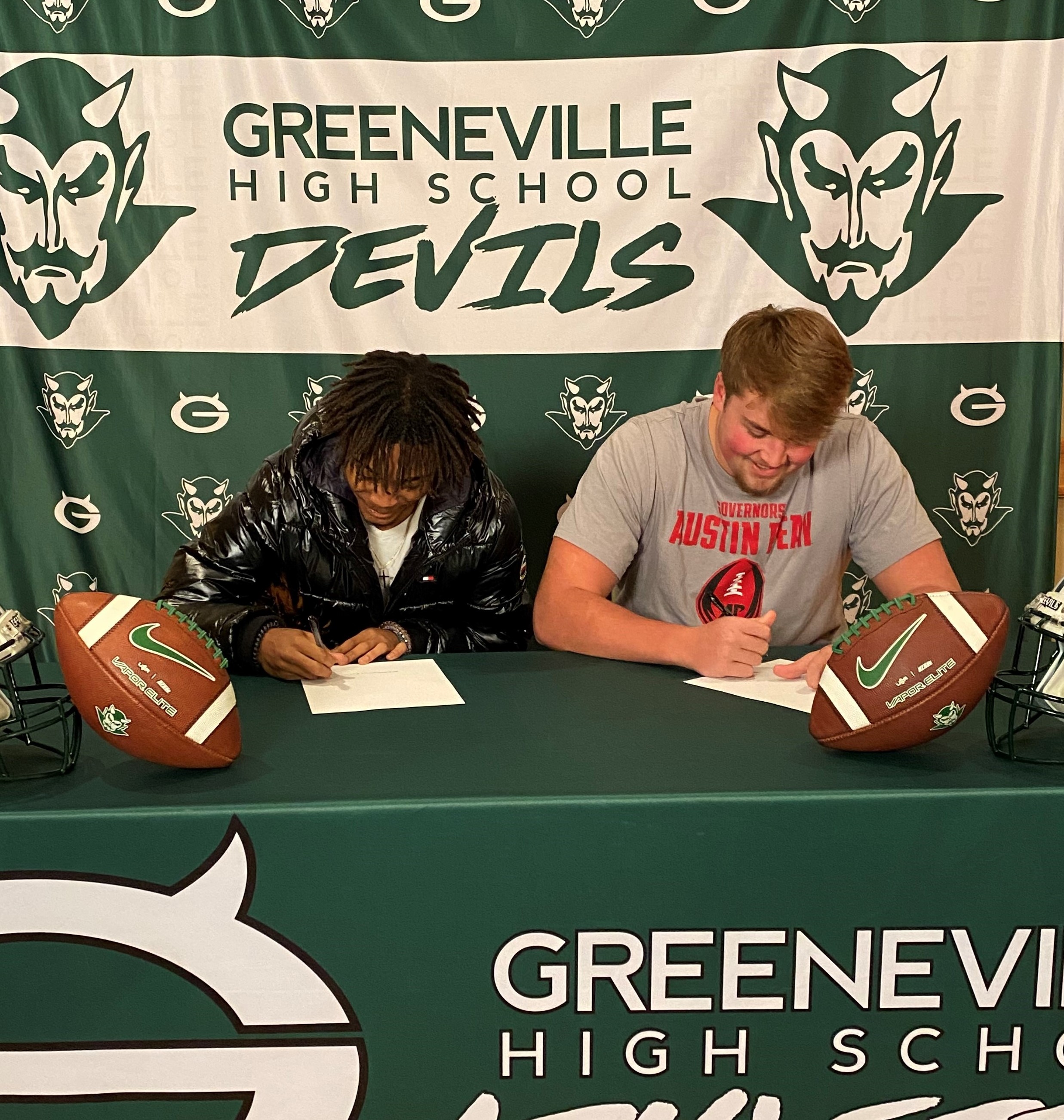 A pair of Greeneville Greene Devils made their dreams come true Friday afternoon by signing their letters of intent to further extend their academic and athletic careers at the college level. Adjatay Dabbs signed to play football at Mercer University and Ty Williams signed on to play at Austin Peay State University.

“It’s something that you want since you were a kid,” Dabbs mentioned. “It’s a big opportunity and I’m going to use it the best I can.”

“It’s been a lifelong dream and I’m going to finally be able to fulfill it,” Williams stated.

Friends, family, and coaches of both players joined together at Greeneville High School to celebrate the occasion. Both athletes have the honor of following in the footsteps of many great Greeen Devil alumni before them in having the distinction of playing Division I football.

Both players served as team captains for Greeneville in their senior seasons. They were a huge reason that the Devils were so successful on their way to a perfect 10-0 regular season and a deep playoff push.

“Everybody that called me wanted to know what kind of guys they are. These are the type of guys that you want in your football program. Both guys were voted on by their teammates to be team captains for us. They did a lot of good things for us and represented our football program and this school and community as best they could while they’ve been at Greeneville High School,” Greeneville Head Coach Eddie Spradlen said.

Adjatay Dabbs will become a Georgia resident for the next four years with his commitment to play for Mercer University.

The Bears compete in the Southern Conference and finished the 2022 season with a 7-4 record and 5-3 inside of conference play.

“They came and watched me workout in the spring this year and after that they’ve been in contact with me ever since," Dabbs said. "They came to our game against Sullivan East and after that game I got the offer. I went on an official visit down there beginning of December and after that I just knew I fell in love with the place and just knew where I wanted to be.”

Dabbs received college offers from 16 different schools. He ultimately decided on choosing to continue his career at Mercer, but had serious interest in Chattanooga and Memphis.

Dabbs racked up 692 yards on 37 catches with eight trips to the end zone in his senior season for the Greene Devils at the wide receiver position. He stepped in at tailback and scored four more touchdowns on the ground. The senior wideout led Greeneville in total points with 78.

A share of the Region 1-4A Offensive Player of the Year award was given to Dabbs for his impressive season on offense.

On the defensive side of the ball, Dabbs totaled eight solo tackles, two interceptions, and one pass breakup.

The college game is much faster and more physical than the high school game and Dabbs plans on using his spare time to prepare for the tough transition.

“The first thing I feel like I got to do is put on the weight. You’ve got to put on the weight to compete at a high level. I know the games going to be a lot faster so I have to adapt quickly when I get there,” Adjatay said.

Dabbs is also a part of the two-time defending state champions on the hardwood. He received an offer from Maryville College to play basketball, but his desire to play football at the next level and his love for the game was what led to his decision.

“Basketball is a sport that you can play four times in one week. Football you play one time in a week so that’s more preparation and it’s more of a mental game. I like that and I like the way football is,” Dabbs explained.

Ty Williams will stay inside of state lines and spend four seasons in Clarksville as a Governor at Austin Peay.

Austin Peay recently joined the Atlantic Sun Conference in 2022 after being affiliated with the Ohio Valley Conference from 2007-2021. The Governers finished their 2022 campaign with a 7-4 regular season record and went 3-2 against conference opponents.

“Austin Peay hit me up and wanted me to go to camp. I went to camp there and balled out like usual and then got my offer,” Williams mentioned. “Its really family oriented there. I felt the family atmosphere as soon as I got up there for the first visit. It just really felt like home.”

Austin Peay was the lineman’s choice in the end but had serious interest in Troy and Army. He received nine total offers from various colleges.

Williams broke through opposing offensive lines for 13 solo tackles, 21 assists, three tackles-for-loss, and one sack in his senior season. He did an even better job protecting his quarterback on the offensive line by earning a share of the Region 1-4A Offensive Lineman of the Year.

His athletic career at Greeneville isn’t over just yet though. Playing basketball is a way for Williams to stay conditioned and active while he is not on the football field.

“It keeps me in shape and also keeps me from gaining unnecessary weight and keeping me nice and athletic,” he mentioned.

He is undecided on a major as of now but has interests in biology and business.

“I like physical therapy and just the business aspect. Trying to run my own thing and keeping it under me,” Williams expressed.

The senior athletes reflected on their time spent inside of Burley Stadium and had many people to thank on their special day.

Williams said, “I have to thank my family mainly and coaches for always pushing me to be the greatest that I could be. Always putting in that extra work with my dad and trainers that I’ve had over the years. Practice with coaches always pushing me because they knew my potential and how it’s really shown how much work I’ve really put in and how much work they’ve put into me and I want to thank them for that.”

Dabbs continued by saying, “I’m going to remember how I came in here and how I finished and how I developed in these four years and how it’s helped me. I became a lot stronger and it’s made me a lot faster. Not just physically, but mentally stronger.”

Both seniors leave Greeneville high school with a decorated career on the field but have a lot more left in the tank with the opportunity to play their best football at the next level.

“It’s been an honor just to be a small part of the journey with them and look forward to following them in the future,” Coach Spradlen expressed.