Greeneville Rallies Past Lady Red For Valuable District 2-3A Win 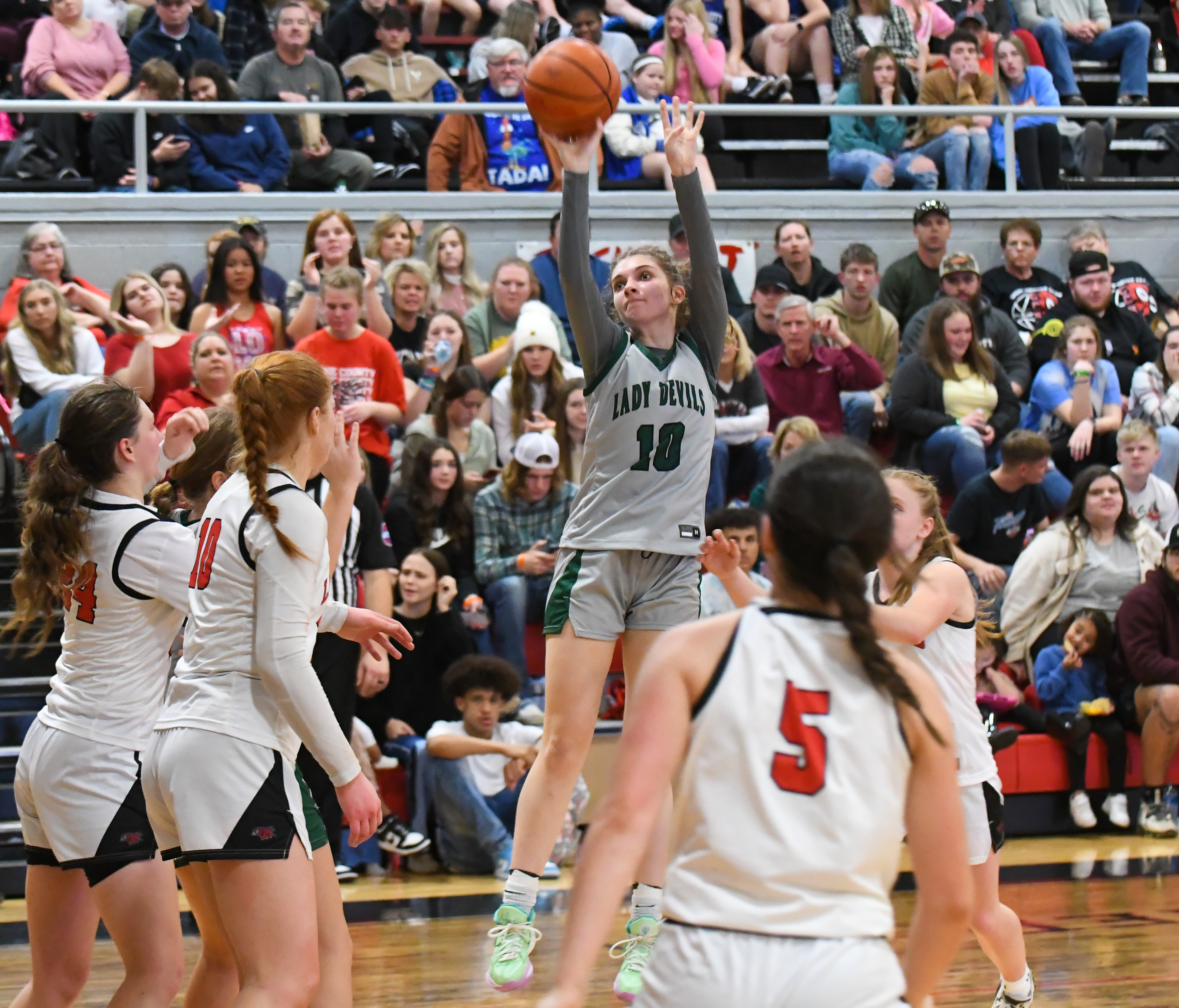 Greeneville Rallies Past Lady Red For Valuable District 2-3A Win

NEWPORT - The Greeneville girls battled to the finish on Tuesday night to earn a hard-fought and valuable win over Cocke County on the road.

The two teams came into the contest unbeaten in District 2-3A play, but with the 64-60 win victory the Lady Devils put themselves in first place at the midway point of the conference schedule.

“I can never get my players to understand and be ready for this environment,” Greeneville coach Annette Watts said. “We gave up too many points, and didn’t play Greenville defense, but we were good enough to get out of here with a win. I think its huge that we can come in here and not play our best basketball, but still get a big conference win.”

Greeneville started the fourth quarter on Tuesday trailing 48-42, but that quickly changed. On the opening possession of the period Lindy Carter sank a three-pointer from the top of the key. Anna Shaw then stole the ball on the baseline and turned it into a layup through contact. She made the free throw that followed, and the game was tied at 48-48.

Tambryn Ellenburg gave Greeneville the lead briefly when she sank a triple in transition that made the score 53-52.

The teams then traded the lead five times over the next three minutes, while the Lady Red helped Greeneville’s cause by missing four free throws.

Then with 1:43 left to play Shaw made what may have the play of the night when she swatted the ball out Paige Naithammer’s hands at the three-point line and went the other way for a breakaway layup that put the lady Devils in front 59-58.

After that the Lady Devils earned a stop and Shaw extended Greeneville’s lead with a free throw. She missed her second toss but Carter grabbed a tough rebound and put it back to push the lead to 62-58.

Blake Clevenger earned the Lady Red’s final points on a driving layup with 22 seconds left, but Lauren Bailey was able to make it a two-possession game again with a pair of free throws.

“With five seniors it was good to see that we could figure things out late. We should be able to do that, we should know what to expect here. I was really proud of Lindy and Chloe, I thought they both did a really good job,” Watts said.

Tuesday’s action started with Cocke County taking an 8-0 lead behind three-pointers from Addison McNealy and Clevenger. In that same stretch Greeneville turned the ball over twice and did not get a shot off.

Kyla Jobe came off the bench and gave the Lady Devils a spark with five points. After a steal by Shaw Marsh was fouled going to the basket and made both free tosses.

Marsh then jumped a pass at midcourt and set up Carter for a jumper from the right wing that gave Greeneville’s its first lead at 9-8.

After an offensive rebound by Carter Bailey made the second chance count with a triple that gave Greeneville a 15-12 lead.

Another offensive rebound set up Bailey for another three-pointer just before the quarter came to a close and Greeneville led 20-16.

Early in the second quarter Destiny Reese earned three points the hard way for Cocke County to close the gap to 22-21.

Greeneville then got a pair of jumpers from Dalaina Martin and a layup from Marsh to stretch the lead to 28-21.

Cocke County was able to tie things at 28-28 when Kristen Moore laid one off the glass, but Ellenburg was able to give the lead back to Greeneville with a three-pointer just before the buzzer that made it 31-28.

The Lady Red started the second half on a 12-2 run in which Niethammer scored seven points.

Carter followed with seven points in the third quarter for Greeneville to close the gap to 44-42. Then over the final minute of the period Clevenger and Neithammer both scored in the paint to stretch Cocke County’s lead to 48-42.

Carter led Greeneville on Tuesday with 16 points while Bailey put in 14 and Marsh scored 11.

Naithammer and Clevenger both scored 17 points for Cocke County.