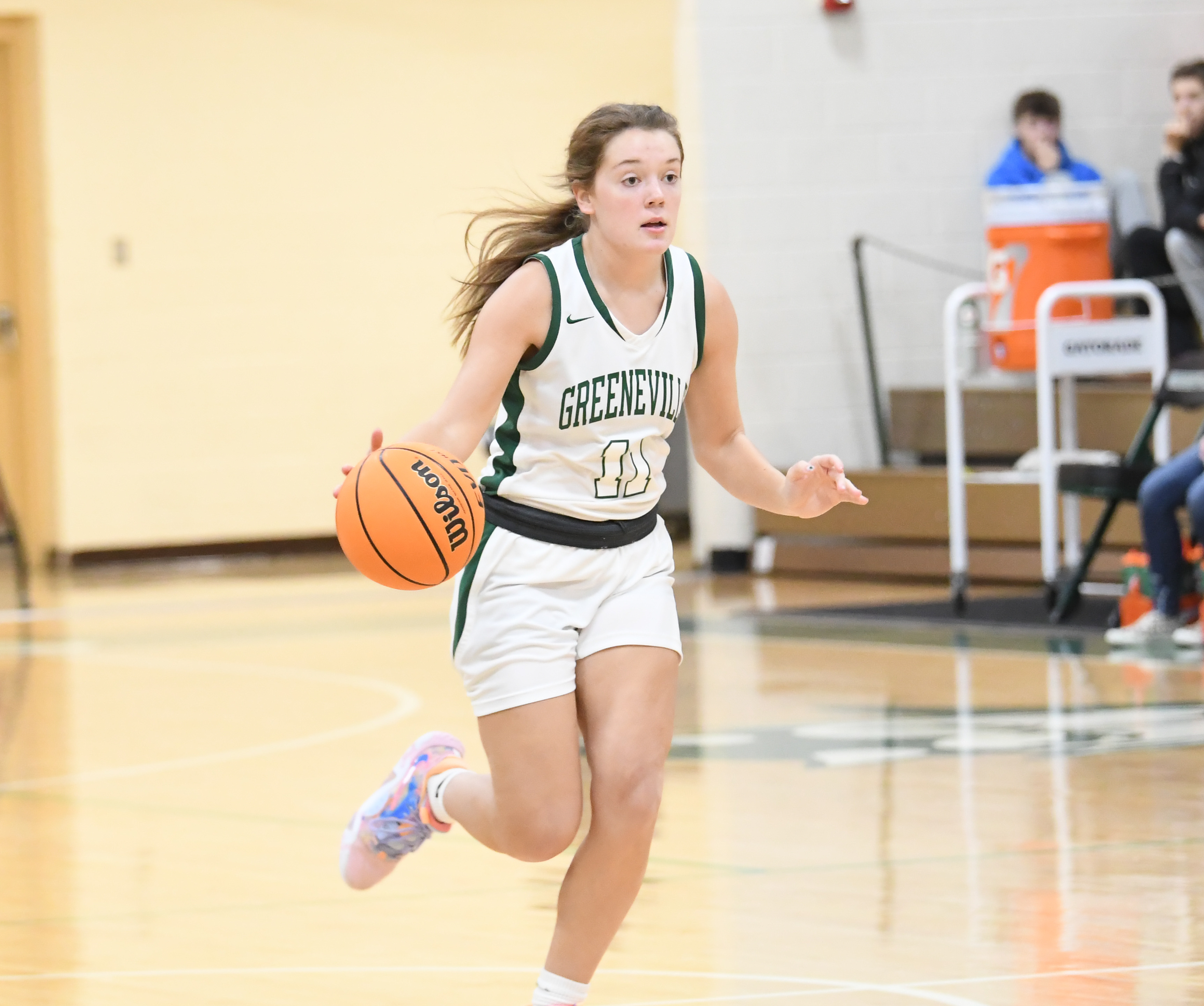 Friday the 13th was not unlucky for Lindy Carter as she scored the first 11 point for Greeneville before helping the Lady Devils to a 61-39 win over Grainger.

In the words of head Coach Anette Watts, "Lindy came to play tonight, they weren’t ready for what Lindy can do”.

After Carter's hot start and with an 11-4 lead over the visiting Lady Grizzlies from Grainger County, Anna Shaw picked the pocket of Marly Tanner and went for a easy layup. Just seconds later, after a turnover, Lauren Bailey hit a short jumper in the lane and was fouled. She made good on the free throw for 16-4 lead with 1:46 left in the first quarter.

Tambryn Ellenburg hit a triple from the elbow to give the Lady Devils a 22-6 lead with 20 seconds to go but Adison Hayes got off a shot as the quarter came to a close to make it 22-8 heading to the second period.

Ellenburg hit another three-pointer, this time from the corner, as the second quarter started. Carter drove the lane and powered through traffic for layup to give the Lady Devils a 31-13 lead, and Shaw also drove the lane for a layup on the next trip down the court.

Ellenburg rounded out the scoring in the first half with her third bucket from behind the arc and the Lady Devils were up 36-17 at the half.

Bailey came out in the third quarter with a quick bucket from out front that was followed by a Chole Marsh layup. Bailey completed an old-fashioned-three-point play then two more from the free-throw line to give the Lady Devils a 15-point cushion at 45-30.

Bailey then got the lead to 20 points at 50-30 with two more from the charity stripe before Jordan Swatzell sank two from the line to end the third quarter at 52-30.

As the fourth quarter it looked as if coach Watts was going to let the reserves finish out the game but she saw something she didn’t like and re-inserted the starters at the six-minute mark.

Coach Watts later said, “they found a momentum and I wanted to keep the pedal to the metal and my young girls aren’t ready for that yet”. As the game went on Watts did trickle in the reserves and the Lady Devils went on for a 61-39 win.

Watts stated “(Grainger has) given us fits for years, but we took care of business tonight."

Greeneville freshmen Trey Thompson has not had much exposure to the Devils' rivalry with Grainger, but in his first meeting with the Grizzlies he played a big role in leading the Devils to a 68-46 win.

The Grizzlies jumped out to an early five-point lead when Drew Branson nailed a three from the top of the key. Thompson was able to hit a little jump-hook in the lane and was hacked. He completed the and-one to cut the lead to one at 8-7 at the 2:22 mark.

After a stop on defense Jayquan Price sank a triple from the elbow to give the Devils their first lead of the evening at 10-8. Hayden Goad made a layup from in front, and Price stole the ball before going in for a easy basket as the quarter was winding down to make it a 14-10 lead for the Devils at the end of one quarter of play.

In the second quarter the Devils started taking control of the game and saw J.D. Woolsey throw up an ally-oop dunk to Thompson. Thompson was fouled on the play and hit the free toss for a 21-10 lead.

Grainger's Kade Williams hit from behind the arc to cut the Devils'  lead to 24-23 with 2:50 left in the half.

Thompson then hit a triple from the elbow as did Issac McGill after a defensive stop. Goad then found Thompson streaking towards the goal from another ally-oop dunk. Goad hit a short jumper in the lane and the Devils were quickly back up 11 points at 34-23.

Ryland Burchett and Branson scored quick baskets near the end of the quarter for Grainger and the half ended with Greeneville leading 34-27.

Price opened the third quarter scoring with a powerful drive to the hole and Thompson hit another little jump-hook in the lane. Price came up with a steal at the 5:10 mark and went coast to coast for a layup.

Goad then sent a triple through the net from the elbow and Greeneville was up 13 points at 43-30. Thompson drove the lane with force for a layup off the glass. Branson would then hit a runner in the lane followed by a three from the corner and the Devils' lead was down to 45-35.

Greeneville followed with a quick 7-0 run late in the quarter when Thompson hit two free ones and McGill drove to the hole through contact for three points. Price hit Adjatay Dabbs in stride racing for the goal for the layup and the Devils were up 52-35 heading to the final quarter.

To start the fourth quarter the Grizzlies were slow getting in position and Thompson threw down another two-handed dunk. From that point Goad and Price took over. Goad knocked down a three from the corner and a two from right around the free-throw line. Price sank one from inside and drove the lane twice.

Coach Woolsey later said, “We’ve been waiting Hayden to have a good game, his shot just haven’t been falling. Yhey’ve been in and out and tonight they fell. Jayquan had a big game for us tonight, he did a great job. Adjatay didn’t score much tonight but you could see the difference in us when he was on the floor."

Thompson finshed with 21 points to lead the Devils while Goad and Price each scored 15 points.