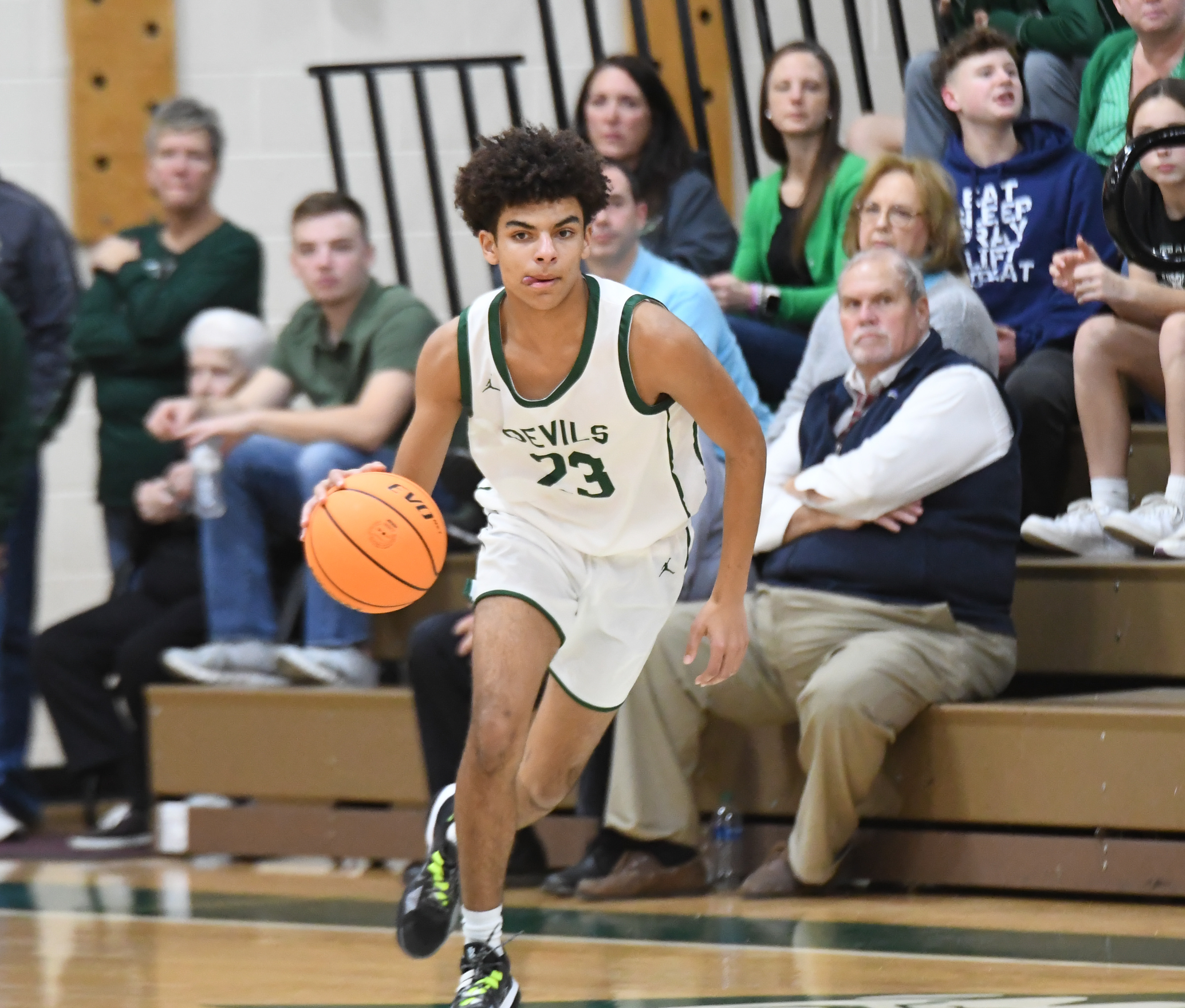 It was not easy but in a game was back and forth all night the Greeneville boys finished the night with a 60-55 win over Science Hill.

Greeneville coach Woolsey said, “I thought we would play better, but I knew the Science Hill would play hard. They have some guys that can shot the ball and when you shot the ball well you can stay in games and they did”.

The Hill Toppers took an 11-4 lead in the first quarter when Mason Wood made a triple from the top of the key midway through the quarter. Kam Lester tossed a nice pass to Adjatay Dabbs streaking toward the goal for the layup, and moments later Dabbs found freshman Trey Thompson behind the arc for a three pointer to get the Devils within two points at 13-11 with 1:40 left in the opening quarter.

Dabbs hit a three from the elbow, Thompson had a tip in, and then with the quarter winding down Dabbs stole the ball and went in for a lay up just before the buzzer sounded for an 18-15 lead.

The second quarter saw the Toppers come back and take a lead after tying the score on three different occasions. At the 4:15 mark Carter Skeen sank a triple from just left of the key and the Toppers were in front at 24-21. Skeen would hit another triple, this time from the corner for a 27-23 lead at the 2:20 mark.

Dabbs brought the Devils within one at 27-26 when he stole the ball and went coast to coast for a layup through contact. He made the free throw at the 1:02 mark. The Toppers were holding for the last shot of the half but Dabbs made a clean steal and found Jaquan Price racing to the goal for a layup to give the Devils a 28-27 lead at the half.

The third quarter was another tight one as the lead was again back and forth with four ties. Late in the quarter Thompson made a little turn-around jumper in the lane and was fouled, he completed the three-point play before Isaac McGill hit a pull-up jumper in the paint to give the devils a five point lead at 40-35.

Oliver Dekeison hit both ends of a one and one with 31 seconds left in the quarter to bring the score to 40-37 as the quarter ended.

The fourth quarter saw three lead changes and three ties. Dabbs broke a 47-47 tie with a drive though the lane and a jumper off the glass. For Science Hill Jaysahn Swartz hit one of two free throws to make the score 49-48 with 3:32 left in the game. Dabbs then drove the lane and put up runner, but Dabbs he fouled and Malacki Hale expressed his displeasure to the official to earn a technical.

Dabbs hit two of four from the line to make the score 51-48 in favor of the Devils and they had ball with 3:21 to play. Brady Lawson hit two free throws and Dekeison hit one and the score was tied again at 51-51 the 2:10 mark.

Dabbs was fouled as he drove the lane and hit both free tosses to give the Devils a lead at 53-51. Then, maybe the biggest play of the game , Dabbs, a Mercer University football signee, used his football skills to step in front of a pass and found Thompson heading for the goal for a layup through contatct.

Dabbs later said, “It was instinct to make that pass, I knew he would be there”,

Thompson completed the three-point play by sinking the free throw and giving his team a five point lead at 56-51.

Dabbs knocked down two more free throws with 37 seconds left and Price hit two with 10 seconds left, after his final free throw Price stole the inbound pass to seal the win at 60-55.

The Greeneville girls jumped on top of Sceince Hill early on Saturday and never let up on the way to a 65-38 win.

Chloe Marsh started a 6-0 run for the Lady Devils with nice little up-and-under layup. Lauren Bailey followed with a layup in transition, then Anna Shaw found Marsh all alone under the goal for an easy two points. Tambryn Ellenburg hit her first of five shots behind the arc at the 3:23 mark to stretch out the lead to 9-1.

A Bailey steal and toss to Kyla Jobe as the quarter was nearing its end rounded out the first quarter scoring with the Lady Devils leading 16-3.

The Lady Devils kept the motor running in the second quarter building a 25-point lead heading into the break at 36-11. Ellenburg hit two more triples and Bailey made her presence known on both ends of the court. The play of the quarter came when Dalaina Martin drew a crowd as she drove the lane and kicked the ball back out to Bailey behind the arc for a triple.

Coach Anette Watts said after the game with a big smile “I’m excited about that first half, I thought defensively we were really doing some good things”.

Ellenburg set the tone as the third quarter with a trey from the elbow just seconds into the period. Moments later she drove the lane, stopped on a dime and dropped in a jumper from just left of the free-throw line for a 41-14 lead.

Jobe hit a three-pointer to make the score 50-23 with just under a minute to play in the third quarter. The quarter ended with Greeneville up 50-27.

Both coaches cleared their benches in the fourth quarter and the Lady Devils were just too much for the Lady Toppers of Science Hill as they went on to a 65-38 victory. Watts said of her team “We came out pretty good then we kind of fell down a little bit and senior ladden teams can’t do that. They have to come out and play Greeneville Basketball for 32 minutes, overall I’m pleased”.