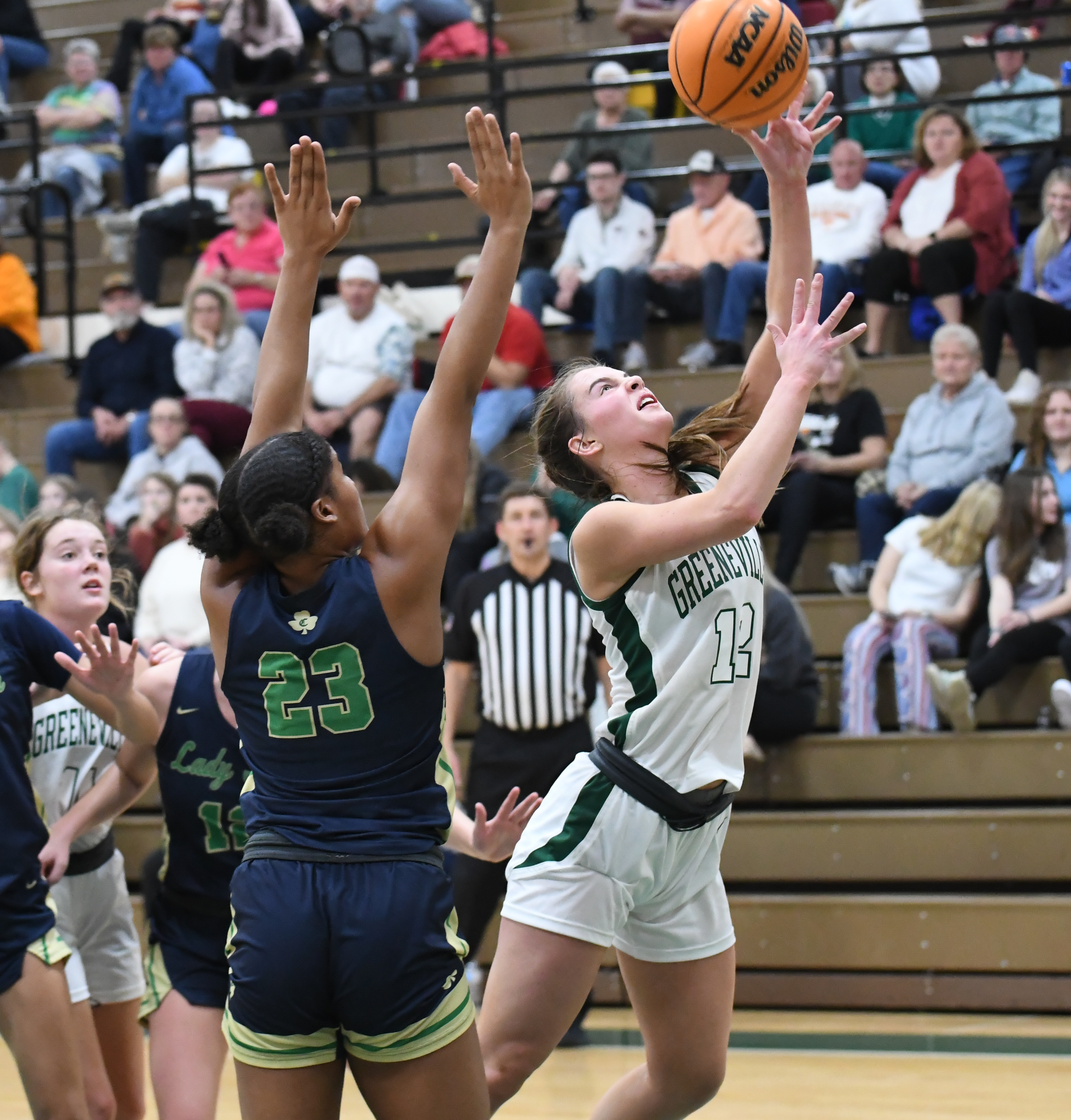 While defense and rebounding carried Greeneville to a win over Cleveland on Thursday, a lack of those on Friday ended the Lady Devils’ chances of claiming the Andrew Johnson Bank Ladies Classic championship.

In the tournament semifinals Greeneville ran up against a tough Knoxville Catholic team and could not keep up, falling 74-51.

“They played as a team, and we didn’t. We never got all five going together. We played as bad tonight as we played good last night,” Greeneville coach Annette Watts said. “Last night was a team effort with everybody on the same page, tonight we just never got that. And, of course, that’s hard when you let a team get hot.”

Things will not get any easier for Greeneville on Saturday with defending Class 3A State Champion Upperman next up. The Lady Devils and Lady Bees will tip off at 3:30 p.m. at Hal Henard Gymnasium in the third-place game.

Friday’s second half started with Greeneville within striking distance trailing 32-26, but the Lady Irish did not waste time changing that.

On the offensive end of the floor Greeneville could not figure out how to get good looks at the basket, and Catholic, who had provided some assistance by fouling  in the first half, found ways to play cleaner defense in the third quarter.

On the other end of the floor offensive boards kept the ball with the Lady Irish, first resulting in a second chance triple from All-State guard Sydney Mains. Next Caroline Krueger was fouled putting back a miss and made both free tosses. Eventually Catholic pushed the lead to 45-26 with a 13-0 run.

When Greeneville played Catholic in November, and collected a 56-49 win, Mains was not on the floor. She made up for lost time on Friday by sinking six three-pointers and pouring in 29 points. Greeneville tried everything it could to stop her, but eventually Lauren Bailey asked for the assignment. While the result was not what Greeneville wanted, seeing Bailey want the big task on the big stage was a sign of growth from the Lady Devils’ leading scorer.

“Defensively I thought that was huge that Lauren wanted to guard her,” Watts said. “I just wish Lauren had started earlier in her high-school career understanding how to guard. When you wait until that senior year when it means so much to you its hard to guard someone like that.”

Two free throws by Bailey broke the Lady Irish streak, but Logan Connaster came back with a pair of triples to stretch the lead to 51-28.

Despite everything going against them the Lady Devils did not quit, and scored the last nine points of the third quarter. Chloe Marsh scored three points the hard way, Lindy Carter got a runner to fall from the baseline, Kyla Jobe tuned an offensive rebound into two points, and Bailey laid one off the glass seconds before the horn to close the gap to 52-42.

The game never got back to single digits as Mains scored eight points in the first three minutes of the fourth quarter and Catholic finished the night on a 16-2 run to pull away to the 74-51 win.

The Lady Irish took command of the game from the start with Mains scoring the first five points on Friday. Bailey scored seven points to keep Greeneville in the game, but two buckets from the block by Maggie Frana in the late stages of the frame stretched Catholic’s lead to 19-8.

Active hands on defense allowed Greeneville to close the gap in the second quarter. First Marsh took a steal the other way for a breakaway layup that turned into three points. Next Anna Shaw swiped the ball twice which led to Carter going 3-for-4 at the foul line. Bailey also sank a trey in the run as the deficit shrank to 25-22.

A free throw from Bailey made it 25-23, but then Mains quickly followed with a three-pointer that started a 7-0 run for Catholic

Bailey scored three more points for Greeneville as part of her team-high 22 points, but the Lady Devils would never get any closer than six points.

Carter finished with 11 points and 10 rebounds for Greeneville while Marsh added 11 points.

For Catholic Connaster and Krueger both scored 12 points. On the day Catholic outrebounded Greeneville 36-24 while shooting 54 percent from the field compared to the Lady Devils’ 33 percent.

Catholic will play Alcoa on Saturday at 5 p.m. in the championship game.