Greene Devils Get By Grainger Again To Capture District Title 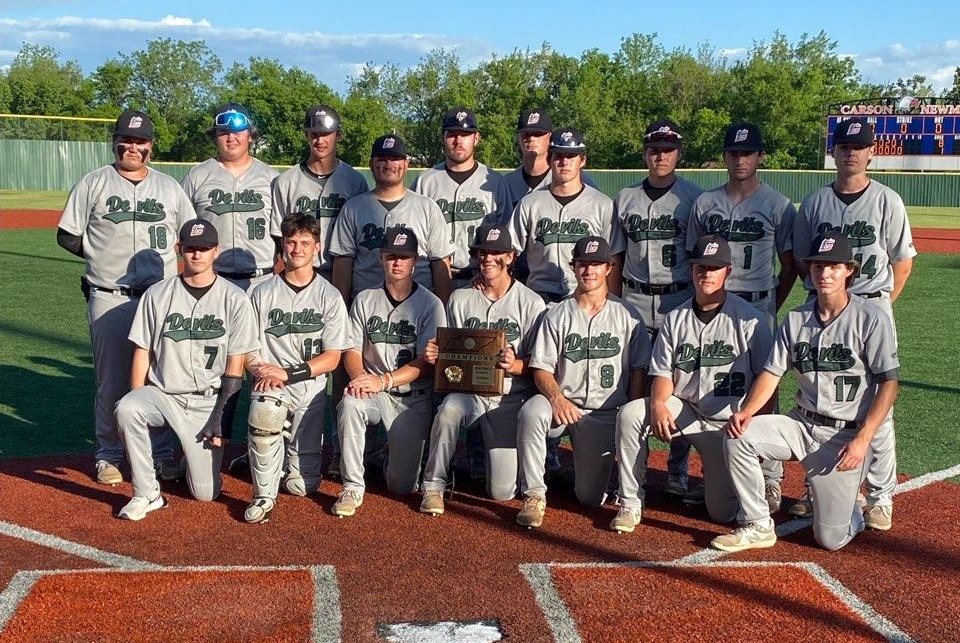 Greene Devils Get By Grainger Again To Capture District Title

The Greeneville baseball team has had a lot of growing up to do this season. With a lineup filled with freshmen and sophomore it was hard to imagine what the squad would become after a slow start out of the gate, but the Greene Devils never quit working and on Thursday they became District 2-3A champions.

Greeneville had to beat Grainger for the second time two days, but the Devils were able to pull off the double dip of the top seed by collecting a 8-1 win at Carson-Newman University.

"When you look back at this team that started the year 2-7, I think we are almost a completely team," Greeneville coach Andy Collins said. "This is a young team, but they have grown up so much this year. They have learned how to play the game, they have learned how to compete. Our pitching has carried us the whole way, and tonight we had some guys step up with good performances at the plate as well."

Grainger answered the opening bell, forcing Greeneville into a three-up, three-down top of the first inning. The Grizzlies followed up on offense by getting the leadoff man, Eli May, aboard, and bringing him around to score, giving Grainger an early 1-0 lead.

The Greene Devils found a little life in the second inning when Anderson Franklin singled to left field, followed by another single off the bat of Eli House.

Franklin attempted to take third base on the play and was thrown out by left fielder, Rylan Burchett. With the scoring threat extinguished, Greeneville struck out to end the top half of the second inning.

Preston Justice got things going for Greeneville in the third inning, when he pounded an outside pitch into right field and raced around the bases for a triple. Carson Quillen then drew a walk to put runners on the corners for the Green Devils with only one out in the inning. Parker Shipley helped himself out with a good piece of hitting, sending a ball back up the middle for a single into center field. The hit would score Justice and move Quillen to second base. The Greene Devils were not finished scoring, though.

"That hit was big for Preston and big for us a team," Collins said. "He had been struggling at the plate this tournament, and it was good to see him have a good at bat. That really got a big inning going for us. We had a few really step up at the plate. Anderson Franklin kind of came into his own the last few days, and it was good to Ty Casteel get something going with a big day."

With two outs in the top of the third, Ty Casteel laced a line drive into left field, that scored Quillen from second. After a shaky start offensively the Greene Devils found footing and continued to prove that offense can be very contagious in baseball. With a 3-2 count, and two outs on the scoreboard, Franklin lined to center field. The Green Devils used timely hitting to plate five runs in the top of the third inning, leading Grainger County, 5-1.

Walks continued to be an issue for Greeneville in the bottom of the third. The Grizzlies drew two free passes from Shipley, but were unable to capitalize, as the Greene Devil defense rallied behind their pitcher, getting out of the third inning unscathed.

Defense won the fourth inning, as neither team allowed a run to score, including another three-up, three-down inning for the Greene Devils.

The bats would once again make an appearance in the top of the fifth inning for Greeneville. Quillen led the inning off with a double to left field. After a ground out from Shipley, Quillen ended up at third base. Colton Richards drew a walk, putting runners on the corners and Quillen scored on a passed ball. Casteel connected for another RBI with a single into left field and the Devils took a 7-1 lead into the bottom of the fifth inning where Shipley shut down the Grizzlies once more.

Shipley would continue his dominant performance on the mound, getting the Grizzlies to go three-up, three-down in the home half of the sixth inning. Greeneville took at six run lead into the seventh-and-final inning.

Greeneville scattered four hits in the top of the seventh inning, adding an insurance run for their defense.

With Grainger down to its final three outs, Greeneville would go to the bullpen to close out the District 2-3A championship game. A.J. Smith got May to ground out to start the inning for followed by a line drive that was snagged by left fielder, Justice, for the second out. Smith then fanned Brady Smith to end the game and secure the district hardware for Greeneville.

Parker Shipley got the win for the Greene Devils, going six innings, allowing only three hits and striking out seven. He was also named the Tournament's MVP.

"Parker was so good at the plate for us this tournament and I was glad to him get that award," Collins said. "He kind of had a slow start the year. But he has worked so hard to get better. He's a kid that just wants to come out and compete. On the mound, as a lefty with his delivery he is hard to hit. He mixes his pitches and his speed so well. I don't know who at the next wouldn't want a guy like that."

Franklin and Casteel were catalysts for a big day for the Greeneville offense. Franklin posting a 4-for-4 effort, while Casteel turned in a 3-for-4 stat sheet. The Greene Devils tallied 14 hits on the day, with Franklin, Casteel and House giving a multi-hit effort.

Greeneville now moves on to the Region 1-3A Tournament where it will host Tennessee High on Monday in the semifinals.