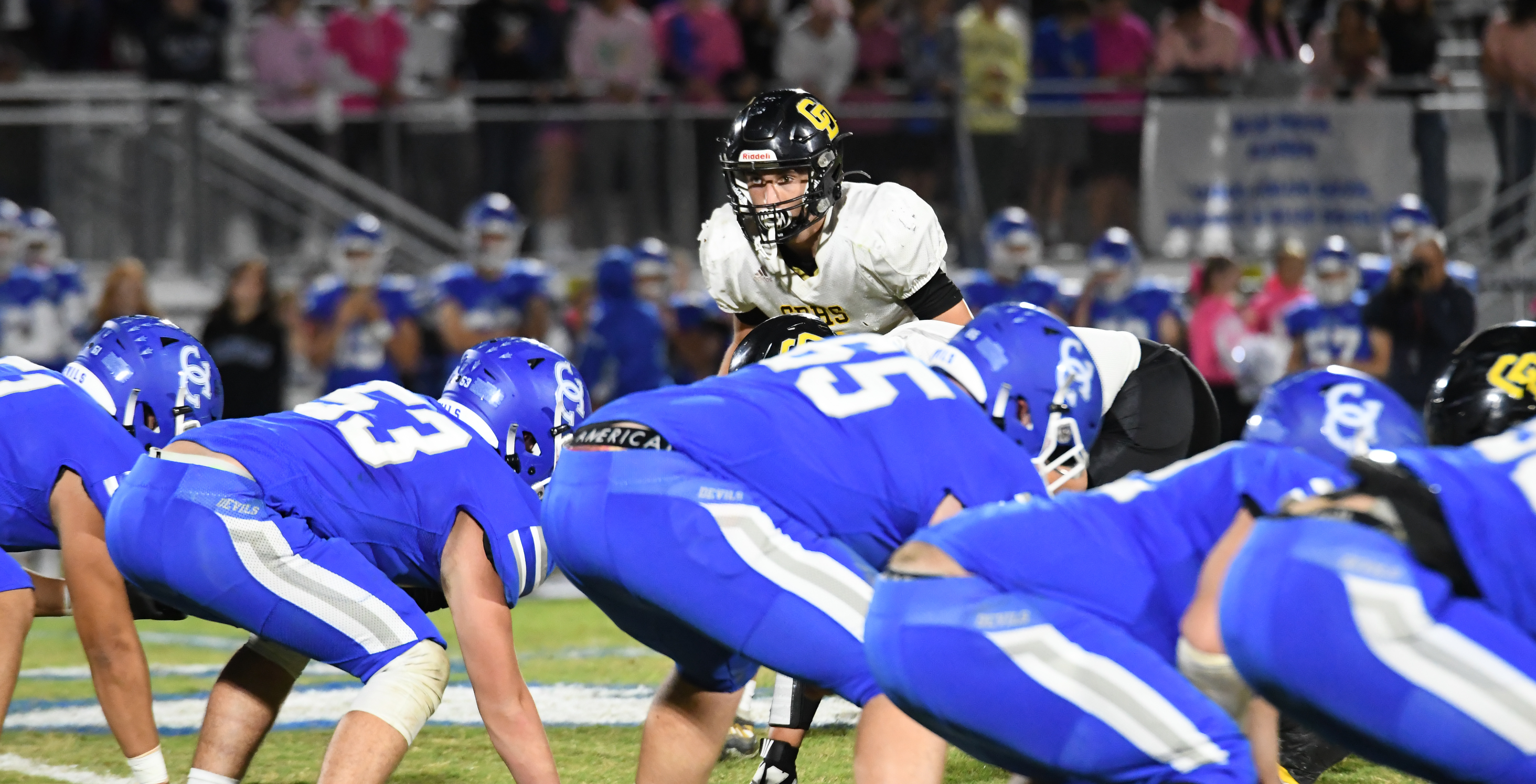 We at Grassroots Media are excited to announce our second annual All-Greene County football team.

The team was selected by the Grassroots Media staff with input from local coaches. Selections are based on performance and production during the 2022 season.

We were fortunate to see all five Greene County teams make the playoffs this season, and some of them did so in historic fashion. With that came some truly spectacular seasons turned in by a plethora of great players, which meant there were a lot of worthy candidates to choose from. Selections were not taken lightly, but our staff watched more games than anybody else, did more interviews than anybody and broke down more film than anybody else, and because of that we feel like we have given you the best team we can to represent Greene County football.

So without further ado, here is your Grassroots Media All-Greene County football team, the defense.

Chuckey-Doak linebacker Rio Little has been selected as the Grassroots Media Defensive Player of the Year. Little flew all over the field this season as he helped Chuckey-Doak to its best ever record at 10-2, that included its first playoff win since 2011. Little's defense got the Knights' 10-game win streak started with a momentum shifting punt block against Happy Valley. The play fired up the Knights as they cruised to the first win of the season, and from that point onward Chuckey-Doak never looked back. He finished the year with a team-high 98 tackles with 6.5 tackles for loss, two sacks and two interceptions. Little was named the Region 1-3A Co-Defensive Player of the Year.

Little also emerged a weapon on offense for Chuckey-Doak's this season. He caught 13 passes for 313 yards with five touchdowns while running nine times for 105 yards and three more touchdowns.

Nathan Norton was a force along both lines of scrimmage in his senior season at Chuckey-Doak. He finished the year with 41 tackles, three sacks, and 5.5 tackles for loss from his defensive tackle spot. But maybe more importantly than that he forced double teams often, and when he didn't get credit for the tackle he disrupted plays by crashing through the line of scrimmage. Norton was also a key part of Chuckey-Doak's offense that broke school records and scored at a historic pace. Norton was named the Region 1-3A Co-Defensive Lineman of the Year.

Phillip Blair was a key piece to a stout South Greene defense this season. The senior was third on the team in tackles with 58 while making seven stops behind the line of scrimmage. He forced two fumbles, recovered two fumbles and scored a defensive touchdown. Blair also had a rushing touchdown on offense. Blair was named the Region 1-2A Defensive Lineman of the Year.

Hunter Burkey burst onto the scene as a dangerous threat coming off of the edge for South Greene's defense this season. In his senior season Burkey was second on the team with 67 tackles while making a team best 15 tackles behind the line of scrimmage. Burkey also had one sack. He was named first team All-Region 1-2A.

Every offense that Greeneville lined up against this season had to know where defensive end Bryson Myers was on every snap, and often it did not matter. The junior finished the year with 62 tackles, 16 tackles for loss and a county best 12 sacks. Myers had three fumble recoveries with a defensive score and two forced fumbles. He also had 18 quarterback pressures. Myers was the Region 1-4A Co-Defensive Lineman of the Year.

Ethan Turner was a dynamic playmaker on both sides of the ball for West Greene this season. On defense he made 89 tackles with eight tackles for loss, six sacks, two interceptions and two fumble recoveries. Turner was named the Region 1-3A Co-Defensive Player of the Year.

On offense Turner was always the focus of opposing secondaries but he still managed to make 25 catches for 435 yards and four touchdowns. On the ground he ran for 194 yards and scored five more touchdowns.

Amanuel Dickson had to wait a few games to get his 2022 campaign started, but whenever he stepped on the field his impact was felt. Dickson made 74 tackles as a junior with an impressive 20 of them coming behind the line of scrimmage. Dickson also had three sacks, two forced fumbles, one interception and one fumble recovery. Dickson was named the Region 1-4A Defensive Player of the Year.

Nik Pillar was a pleasant surprise for Greeneville fans this season. Seeing his first significant varsity action Pillar quickly became one of the Greene Devils' top defenders. He led the team with 89 tackles while making 12 stops behind the line of scrimmage. Pillar had two sacks and one interception. He recovered three fumbles, and forced one fumble. Pillar was named first team All-Region 1-4A.

South Greene senior Derek Miller was the leader of the Rebels' defense that caused problems for every team it faced this season. Miller led South Greene with 94 tackles from his middle linebacker spot. He also had five tackles for loss, one sack, one interception, one forced fumble and one fumble recovery. He was named the Region 1-2A Co-Defensive Player of the Year.

Conner Race was a standout on both sides of the ball for South Greene this season. In the secondary Race was one of the Rebels top players with 30 tackles, three interceptions, and one tackle for loss.

On offense he led the Rebels with 587 rushing yards and was second on the team with 246 receiving yards while scoring seven combined touchdowns. Race was named first team All-Region 1-2A

Brock Rush was a dynamic playmaker this year for Chuckey-Doak and that showed up on both sides of the ball. He made 35.5 tackles with three tackles for loss and three forced fumbles. Most impressively Rush intercepted four passes and returned two four touchdowns, including a 100-yard return against South Greene.

On offense Rush caught 32 passes for 448 yards with seven touchdowns. He ran for 59 yards with another score. He was named first team All-Region 1-3A.

Mason Laws was the last line of defense for a Greeneville defense that dominated opponents this season. The safety finished his senior year with 19 tackles, two interceptions, and six pass break ups.

On offense he was Greeneville's leading receiver with 46 catches for 758 yards and nine touchdowns. He also averaged 28 yards per kickoff return with another touchdown.

Greeneville's Carson Quillen had the type of sophomore season that will cause opposing coaches to loose sleep over the offseason as they try to figure out how to stop him over the next two years. On defense Quillen made 66 tackles with one tackle for a loss. He intercepted three passes with one fumble recovery and one defensive touchdown.

On offense he ran for 563 yards while averaging over 10 yards per carry. He also caught 22 passes for 396 yards and scored nine combined touchdowns. Quillen was named the Region 1-4A Co-Athlete of the Year.

Dion Blair did a little bit of everything for South Greene this season and was selected to the All-County team as a returner. He finished the year with a combined 210 return yards.

On defense Blair made 56 tackles with one sack, three tackles for loss and two interceptions. He was named first-team All-Region 1-2A.

Grayson Collins was the leader of North Greene this season and was selected to the All-County team as a punter. Collins punted the ball 27 times with an average of 29.4 yards per punt.

As the Huskies' quarterback Collins threw for 711 yards with six touchdowns and 17 interceptions. He ran for 680 yards and eight touchdowns.