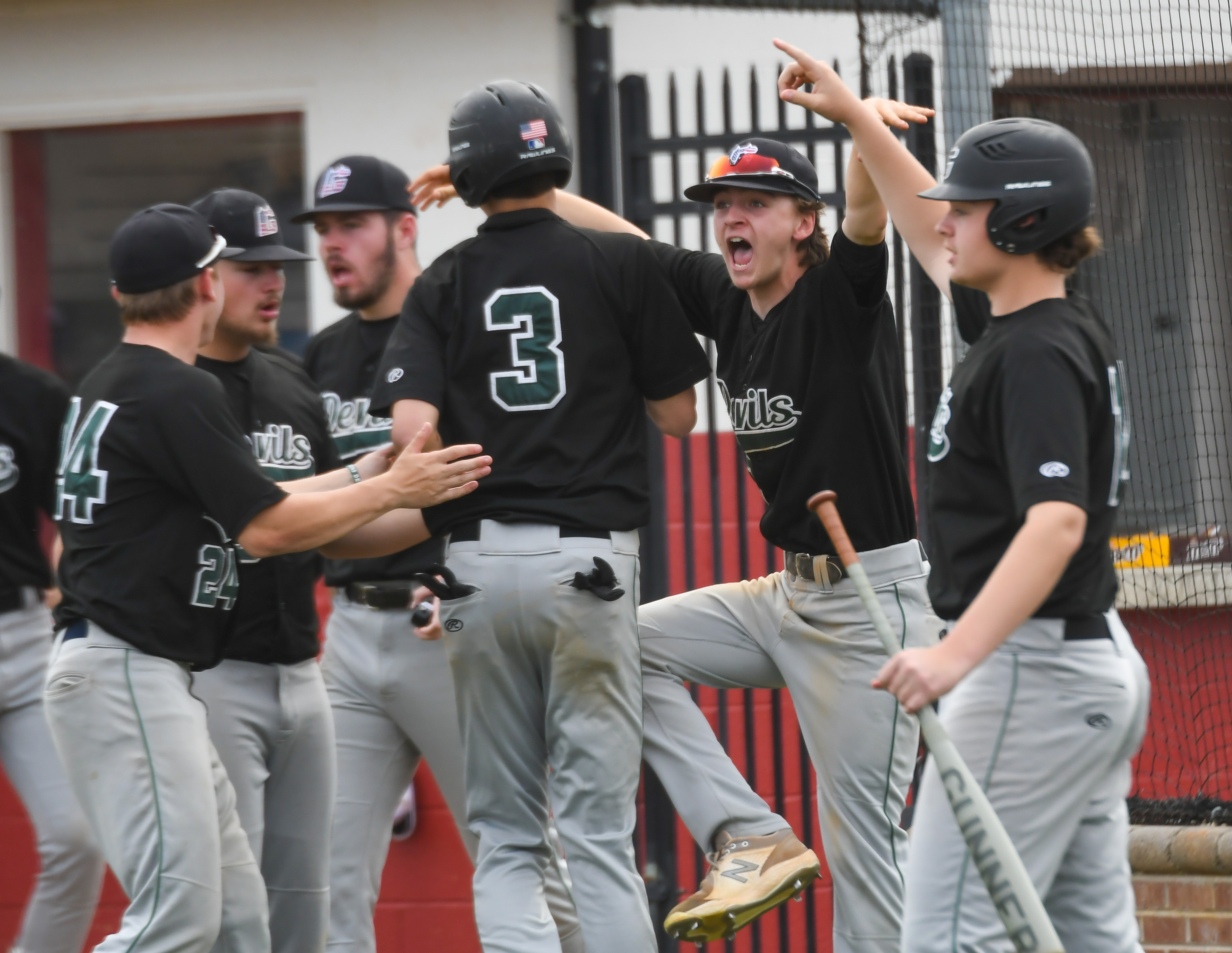 GRAY – The Greeneville baseball team seemed to find its stride on Friday afternoon and picked up a pair of wins at Daniel Boone which coach Andy Collins hopes will propel the young Greene Devils into big week next week.

The Devils started the day by rallying to a 7-5 win over Christiansburg, Vriginia and then they took down Daniel Boone 10-7 to finish a long afternoon.

Greeneville will be back in action on Saturday against Morristown East at TVA Credit Union Park in Johnson City, and then next week it has District 2-3A contests against Claiborne, Grainger and Cherokee which will play a big role in postseason positioning.

“We have big week ahead of us,” Collins said. “We have played a tough schedule, and I may be at fault for that, but I think for the first time they know we are going to play good teams and that they have come every inning. That’s tough for a young team, but when the younger guys do come to play like that it gets us a ready for a week that is going to be pretty important.”

Against Christiansburg Greeneville went into the seventh inning trailing 5-2, but managed to score five runs on three hits.

Parker Shipley started the side by being hit by a pitch and Colton Richards scored him by slamming a double into the left-center gap. Ty Casteel was intentionally walked and then Eli House hit into what could have been a double play, but the ball was bobbled by the shortstop and both the throws to second and first were too slow.

Richards scored on the play and then Preston Justice pushed across the tying run when he roped one to left field.

The go-ahead run and an insurance run crossed when Carson Quillen skied a fly ball to left field. Kyle Epperly got under the ball, but could not track it to his gloves and with the runners never stopping two were able to get to the dish.

“We were more disciplined at the plate today, and we had a better idea of what we wanted to do,” Collins said. “Colton hit the ball good all day, so did Carson and Parker and Ty. And those guys have to hit for us to have success.”

Shipley took over on the mound in the bottom of the frame and sat the Blue Demons down in order to secure the win.

Christiansburg started the day’s scoring with a ground ball to the shortstop. The throw was down the line and Tanner Evans was able to dodge the tag by Casteel. He went to second and then third on a pair of passed balls. Evans then scored when Nate Hall hit a ground ball back to the mound.

Greeneville was able to knot things at 1-1 in the third frame when Casteel one hoped a fly ball in the 370-foot marker on the centerfield wall to score Richards from first.

In the bottom of the inning Dawson Gragg sent a two-run home run over the right-field wall to give Christiansburg a 3-1 advantage.

Greeneville scored again in the fifth inning. Quillen led off the side with a line drive to left field for a double. He scored when Richards crushed another double to the wall in left field.

Richards went 2-for-4 with two doubles, two RBIs and two runs scored against the Blue Demons.

Christiansburg stretched the lead to 5-2 in the sixth inning when Mason Self put a two-out, two-run single into left field.

Shipley earned the win in his one relief inning. Gage Spano started the game for Greeneville and went 4 1/3 innings with four strikeouts, four walks and six hits allowed.

In the second game of the day Greeneville kept the momentum on its side and took down Daniel Boone 10-7.

On the mound Shipley was in control as he gave up three runs in six innings with 10 strikeouts, three walks and six hits allowed. With that he earned his second win of the day.

“Parker threw strikes,” Collins said. “We kind of did a little reset with everybody this week. With him we went through some statistics, and he had 20 walks in 24 innings. Today he threw strike with all different pitches.”

At the plate Richards continued his big day by going 4-for-5 with a triple and three RBIs.

The Greene Devils plated two runs in the top of the first inning. Quillen led off by reaching on an error, Shipley walked and Richards dropped a single into shallow centerfield to load the bases.

Casteel worked a bases-loaded walk to score the first run. House then hit into a double play, but it allowed Shipley to score.

In the second inning Quillen skipped a ground ball through the left side of the infield to score Corbin Cannon, who reached on a walk, for a 3-0 lead.

The Devils’ advantage moved to 4-0 in the fourth inning when Richards put a line drive into centerfield to score Kobe Mundy.

In the bottom of the same side Jackson Leonard got Daniel Boone on the board when he sent a two-run home run over the left field wall.

The Trailblazers arms began to struggle in the fifth inning, and Greeneville added four runs on one hit. House earned the lone hit with a leadoff single through the right side. Four straight walks followed which allowed two runs to score.

Starter Graham Jones was pulled after he gave up his 10th walk of the day. Slader Tinker came in and walked three batters on 15 pitches without recording an out.

Peyton Long came in and got Boone out of the inning, but not before a sacrifice fly and an error stretched the lead to 8-2.

Greenville’s lead grew to 10-3 in the seventh inning. Shipley got things going by bouncing a single off the mound and into centerfield. Richards then sent a fly ball to the deepest part of the park for an RBI triple.

Caden Fillers came on in relief for Greeneville in the bottom of the seventh and ran into a little bit of trouble. He first gave up a two-RBI double to Tim McGonigle and then a two-RBI single to Hudson York as the gap closed to 10-7.

Quillen took over the mound and struck out three consecutive batters to earn the save.