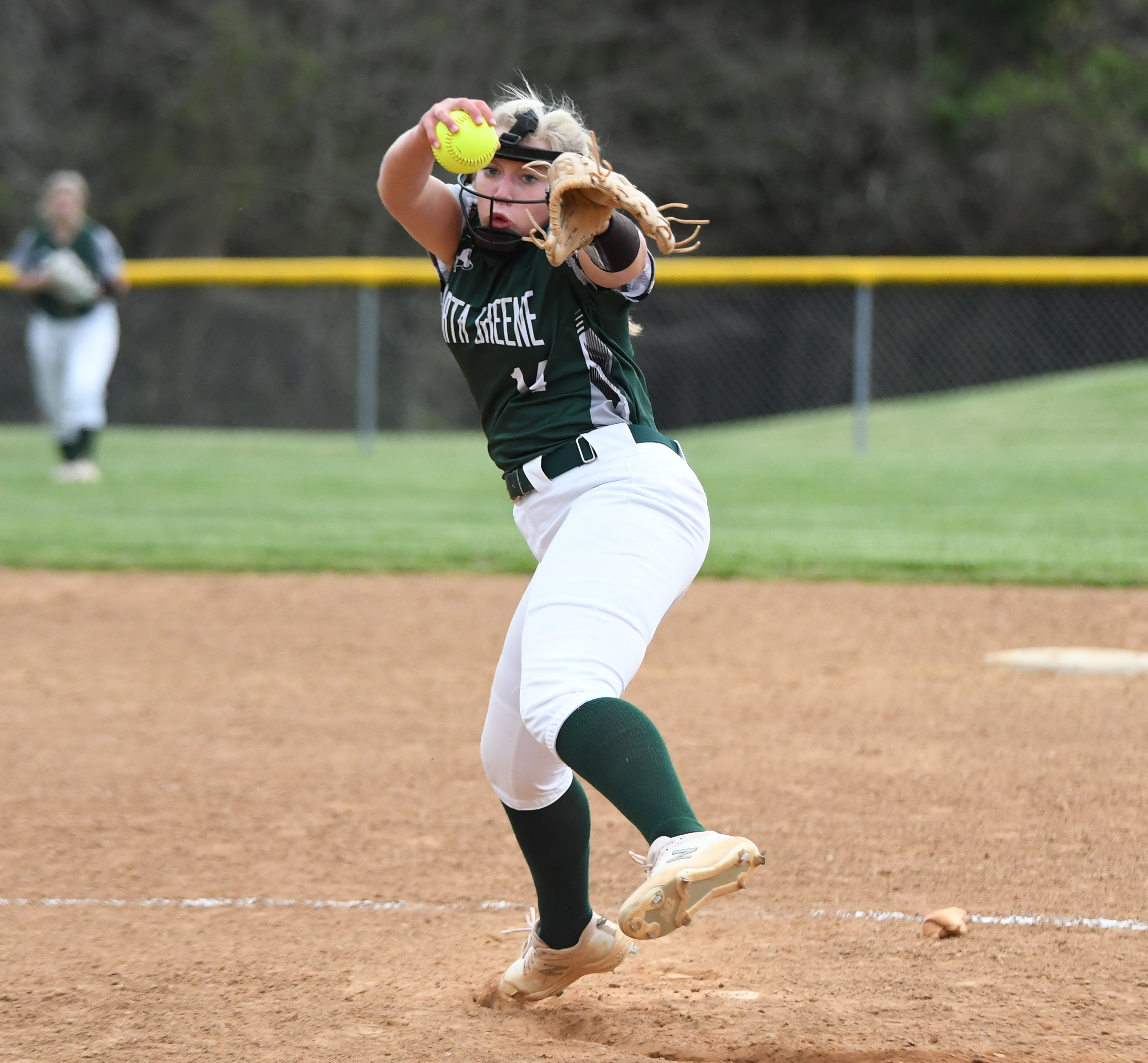 North Greene pitcher Cambell Gaby was almost untouchable on Monday evening as she shut down Chuckey-Doak and started a busy week for the Lady Huskies with a 10-0 win.

“I thought we played really well today in all phases of the game,” North Greene coach Danny Weems said. “We played good defense, Cambell pitched really well, we hit the ball well and we ran the bases well. I was really pleased with the effort today.”

Gaby faced just 17 batters in a five-inning no-hitter, and she struck out 12 of them while walking none.

“Cambell locates the ball really well and she has really good velocity,” Weems said. “We wanted to extend her innings today, because we have kind of limited her. I’m glad we were able to do that and she pitched really well today.”

The victory starts a long week for the Lady Huskies who play every day through Friday, with a cross-county matchup with South Greene on Wednesday and big District 1-1A contests with Unaka on Thursday and Cloudland on Friday.

Chuckey-Doak’s lone hit of the evening came in the first inning when Hayleigh Taylor led off the game by dropping a pop up single into shallow left field. Gaby proceeded to strikeout the next eight batters the Lady Black knights sent to the plate.

The Lady Huskies’ offense got going in the bottom of the first inning with four runs started by Zoe Sanders who sent a bunt past pitcher Makayla Ramsey into dead space on the right side for a single.

Kessie Antonelli Walked and both runners scored when Anna Weems smashed a double into the left-center gap. Weems was thrown out going to third, but she gave  North Greene all of the runs that it would need.

Haley Bailey sailed a double deep into left field and Gaby helped herself by banging a double off of the centerfield fence to score another run. Gaby’s courtesy runner Heidi Harmon moved up on an error in the circle and scored when Kylee Jones hit into a groundout.

“It was good to see that kind of start,” Weems said. “Zoe led us off with a punch bunt, that’s what she is supposed to do and she set the table for those girls behind her. Then our two, three, four and five hole hitters really produced today. Those girls hit the ball really well when we had runners on base.”

Consecutive singles by Weems, Bailey and Gaby in the third inning pushed the score to 5-0.

Paysli Randolph led off the fourth inning by reaching on an error. Sanders then walked and Antonelli loaded the bases with a bunt down the third base line that the Lady Knights could not get to in time.

Bailey cleared the bases when she put a three-RBI double into the left-center gap to stretch the lead to 8-0.

Gaby then knocked in Bailey by smacking a single through the left side.

In the firth inning Sanders led off the side by being hit by a pitch. She stole second and then scored when Gaby fired a line drive into centerfield. The shot gave North Greene a 10-0 lead and ended the game by run rule.

In addition to earning the win in the circle Gaby went 4-for-4 at the plate with four RBIs and a double. Bailey went 3-for-3 with two doubles and three RBIs. Weems went 2-for-3 with a double and two RBIs. Sanders was 1-for-1 and scored three runs for the Lady Huskies.