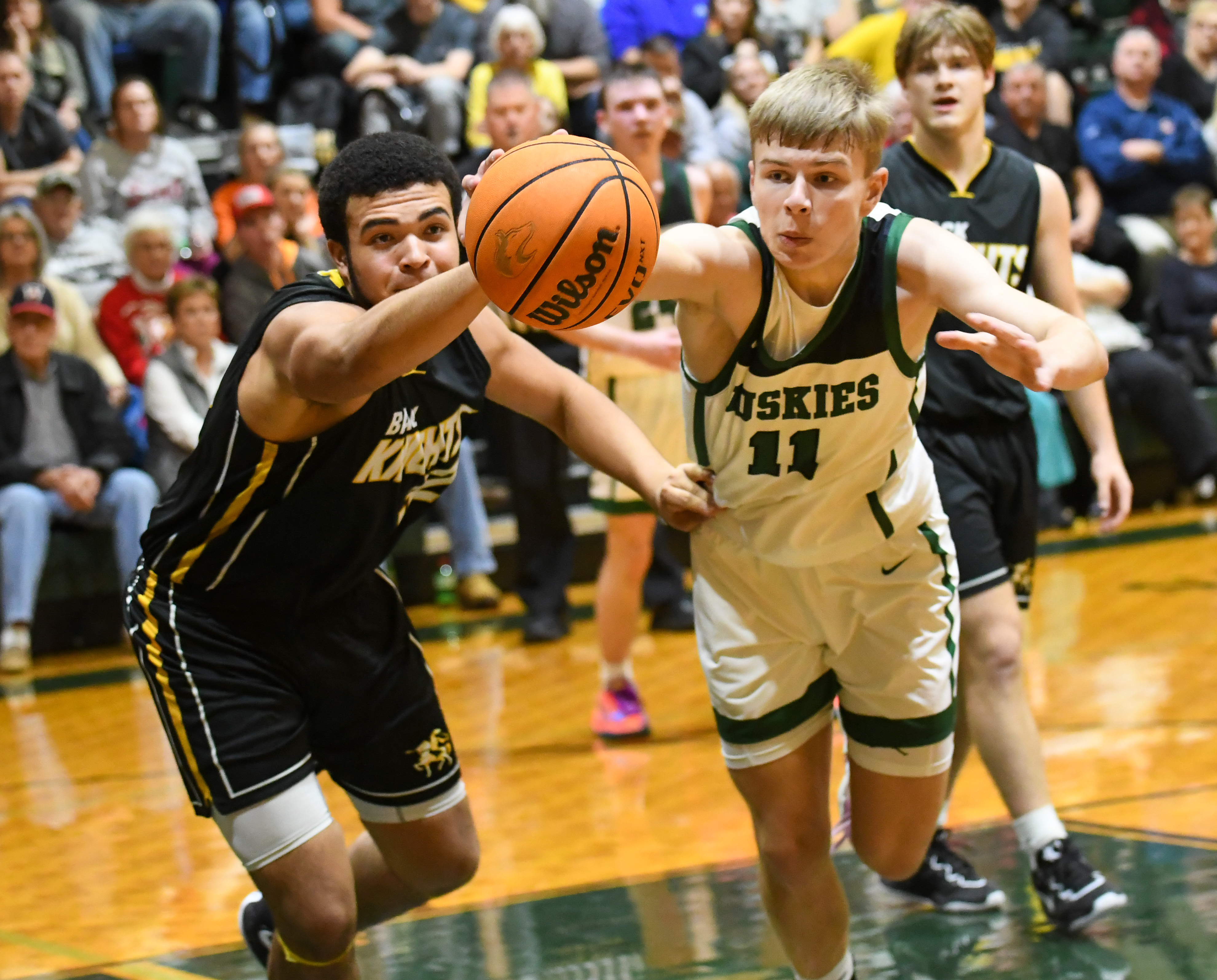 The Chuckey-Doak boys started fast on Saturday night and then held off North Greene’s late comeback attempt to pick up a 71-59 win at the Huskies Den that was filled to capacity.

“I’m proud of these guys, we got our 10th win of the season, and it’s before Christmas,” Chuckey-Doak coach Sam Broyles said. “I couldn’t be more proud of the effort. The pressure of a county game can be real, but we came together at halftime. Christian (Derry) and Cadin (Tullock) really stepped up in the second half and became leaders.”

The Black Knights began Saturday’s action on a 15-2 run that Iasiah Treadway got started with a fast-break layup. Cadin Tullock an Brock Rush also broke away from the Huskies’ defense for easy buckets after turnovers on the other end of the floor, and Christian Derry sank a triple as part of the opening outburst.

North Greene’s Jason Britton ended the quarter with a tip in that cut the Knights’ lead to 17-6.

After Chuckey-Doak’s fast start much of the rest of the night was spent with the teams trading buckets.

Derry got Chuckey-Doak going in the second quarter with a pair of buckets around the basket.

Lance Carrico got a three-pointer to fall for the Huskies, but Ethan Grindstaff put the Chuckey-Doak in front 28-12 when he swiped the ball at midcourt and finished through contact at the rim for what turned out to be a three-point play.

After Bennett McLain grabbed a loose ball and lobbed it in from the lane, Grindstaff got ahead of the Huskies again and put the Black Knights in front 30-16 with 3:03 left in the first half.

With nine seconds left in the first half Brasen Murvin came down the baseline for a layup that gave Chuckey-Doak a 34-19 lead.

Lawson Davenport got the Huskies going in the second half a three-pointer from the left corner and then Britton got to the rim twice to cut Chuckey-Doak’s lead to 36-26.

Britton, North Greene’s All-State guard, led all scorers on Saturday with 28 points but the Knights were able to keep the rest of North Greene’s cast in check, which made a difference in securing the win.

“You have to give Britton credit because he made some tough shots and we were all over him to the best of our abilities,” Broyles said. “I was worried about what their role players would do. When you play a team at there place they can shoot lights out, but our defense played well enough that we didn’t let that happen. Britton might have got his, but it was important to hold the rest of them in check.”

Chuckey-Doak followed with a 7-0 run to push the lead back out to 43-26. Treadway got things started by taking a steal the other way while Derry put back a miss. Grindstaff completed the run with a break-away layup.

Carico was able to make it a single-digit game again at 47-38 when he drained a jumper from the left wing with 1:53 left in the third quarter.

The quarter ended with Britton stealing the ball under Chuckey-Doak’s basket and moving it ahead Dennis Malone for a layup as the buzzer sounded, but Chuckey-Doak still led 53-43.

North Greene looked as though they might have one big push left in them at the start of the fourth quarter. With 5:12 left Britton knocked down a triple from the wing that closed the gap to 57-50 to bring the Huskies faithful to their feet.

On the trip the other way Tullock quieted those spirits when he rattled in a three-pointer. Next Dillon Shelton came up with an old-fashioned-three-point play to give the Knights a 63-50 lead.

With 2:37 left North Greene’s Sam English went the length of the floor and finished through contact to close the gap to 63-55, but the Huskies could not get any closer.

Chuckey-Doak was able to control possession and milk the clock to finish the night with a 71-59 win.

Derry led Chuckey-Doak in the win with 21 points, Tullock added 16 and Treadway finished with 12.