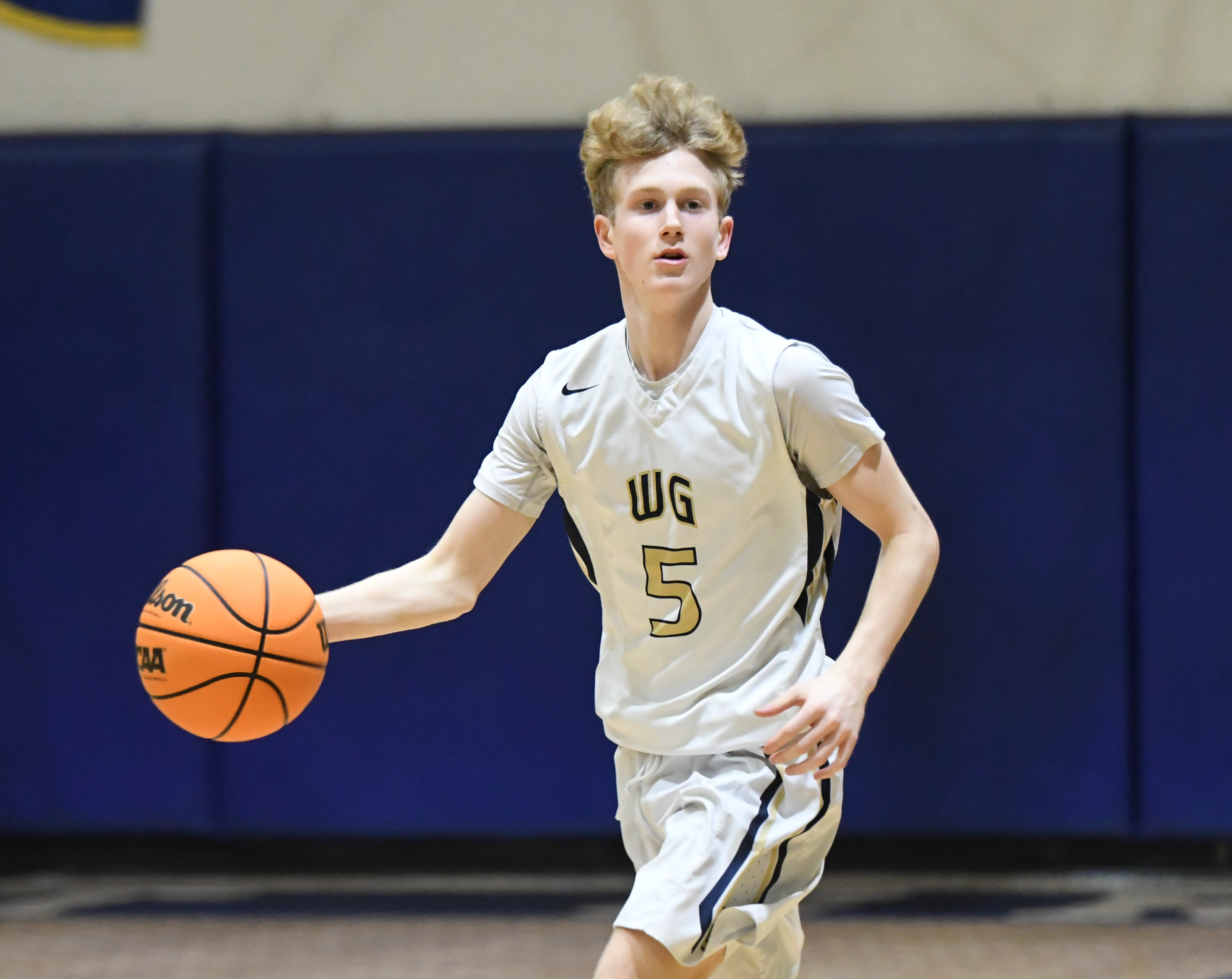 West Greene put the pedal to the metal early and never looked back on their way to a dominant 73-51 win over Washburn. The Buffaloes led wire-to-wire and never trailed for the entirety of the contest.

“I thought we would come out slow and then progressively get better since we played the first varsity game. But we came out good and progressively got worse,” West Greene Head Coach Allen Tolliver said. “I’m not going to dwell on it too much. It’s a win and a win is better than no win.”

Both players got out to a hot start and the Buffs were up 8-0 before you even knew it.

Frye stepped in front of two passes and turned both of those steals into easy layups at the other end. Turner sprinted down the floor and beat the defense to the rim for a layup. Frye notched his third steal in the first quarter and finished it off the glass for two more.

Dillon Renner got a mid-range bucket to fall to break Washburn’s scoreless spell. Austin Wampler and Caden Atkins traded triples on each end of the court.

Ethan Turner didn’t only score points and grab rebounds Thursday night. He locked down the post with a block and sprinted coast-to-coast for a layup.

Conner Campbell closed the first quarter on a strong note stealing a pass and finishing with a layup then busting a three-pointer in the corner. The 5-0 run by Campbell had West Greene leading 25-10 after one.

Mason McCamey stepped in and provided a short floater in the paint then knocked down a free throw at the foul line. Evan Dearinger got a soft layup to fall in the paint.

The Pirates slowly started gaining ground on the Buffs with a transition triple from Kamryn Taylor and another three-point bomb from Harville to shrink their deficit to 33-23.

Leyton Frye responded with a trey of his own to give West Greene momentum before the half.

The Buffaloes held a 39-26 advantage at halftime.

Mason McCamey ran a fast break down the floor and fired a pass to Leyton Frye in the paint for a reverse layup.

Washburn started to catch fire from every spot on the floor and lowered West Greene’s lead to only five points. Ethan Helton got a layup to fall in the paint. Dillon Renner and Kamryn Taylor both fired away from long range and sank triples to make the score 41-36.

As he did earlier, Leyton Frye closed the door on their comeback attempt with two three-point makes to give West Greene more breathing room. Conner Campbell also fought through contact to get a layup to go down.

West Greene pushed their lead up to 50-38 entering the final quarter of play.

Ethan Turner took over the fourth quarter on both sides of the floor. McCamey threaded the needle to connect with Turner for a layup. The senior post swatted a shot off the glass and buried a three-point basket seconds later on offense.

“Big time from him. I think at one point during that stretch it was an eight-point game,” Coach Tolliver said.

Mason McCamey scored a tough off balance shot in the paint off one leg to continue his impressive night.

“He’s really came along down the stretch here lately especially,” Coach Tolliver said. “I know he plays a little bit of a big man but the dudes got some moves and can dribble and he showed that tonight.”

Leyton Frye earned another three-point basket from beyond the arc. Austin Wampler saw what Turner did in the post and wanted to put himself in the highlight reel with a block off the backboard.

Frye put the Pirates to bed with a no-look pass to McCamey for an easy floater and converted a tough layup at the hoop to put the game away for good.

West Greene powered their way to a convincing 73-51 win over Washburn.

“A win’s a win. I’m not going to complain about a win. I’ll take it and we’ll head on into the Christmas tournament with the same mojo we had last year having a little win streak heading into that tournament and build off that a lot. I’m looking forward to it,” Tolliver mentioned.

It was a battle all the way until the final play of the game, but West Greene came up short in a losing effort to Washburn 43-41.

A strong second half effort by the Lady Pirates saw them erase a six-point halftime deficit and pull from behind to claim the victory. They started strong in the first quarter with Braelyn Coffey nailing a three-point bucket to crack open the scoring.

Breanna Ellis put up West Greene’s first two points of the game after catching a tipped pass and sending it through the net for two. Her 17 total points led West Greene in scoring.

Coffey came right back with an old fashioned three-point play. Washburn led 7-2 halfway through the quarter.

The Lady Buffs managed to only score one bucket in the first four minutes, but came storming back to tie things starting with a mid-range basket from Madi Brown. Kinsley Ellenburg added a baseline jumper and Brown drained a three-pointer to pull them even with Washburn at 9-9.

Washburn held a 13-12 lead after the first eight minutes of play.

A turnover by the Lady Buffs granted Hill with a free lane to the bucket for a layup.

West Greene corrected their mistakes and went on an 8-0 run to storm into the lead.

Maddie Bryant sank a long two-point basket to start the run. Hailey Ripley pulled them ahead with an offensive put back at the rim. Madi Brown sank a floater and Kinsley Ellenburg’s layup gave West Greene a 20-15 advantage. Breanne Ellis banked in a three-point shot to continue her impressive shooting night.

The closing moments of the first half saw a double technical with Maddie Bryant and Braelyn Coffey getting tangled up in an exchange on the floor. Both players would be ejected from the game.

Coffey left the game after scoring 11 of Washburn’s 17 first half points. Bryant finished her half with two points.

West Greene led 23-17 at halftime after outscoring Washburn 11-4 in the second quarter.

Callie Nicley scored a layup in the paint to start the second half.

Breanna Ellis splashed another baseline jumper through the net and Kinsley Ellenburg scored a quick two points on an inbounds play after a timeout. Ellis grabbed a rebound on offensive and put it back off the glass for another quick two.

Saylor Clay willed the Lady Pirates back with eight points in the third quarter to pull them even with West Greene going into the fourth. The score would sit tied at 31-31.

Washburn quickly gained the lead back after two three-point buckets from Ebany Hill and Megan Beeler to pull ahead 37-31.

The Lady Buffs struggled to find any points in the first four minutes, but a triple from Ellenburg changed that.

The game would come down to free throws as both teams struggled to make a shot from the field in the final four minutes.

Saylor Clay stepped to the charity stripe and went one-for-two. Madi Brown sank a pair at the line for the Lady Buffs. Ebany Hill matched that with two made free throws of her own.

The last ten seconds of the game was full of drama that saw a three-pointer, technical, and two turnovers. With time winding down and West Greene needing a bucket, Breanna Ellis sank a three-pointer with six ticks left on the clock to make it a one-point game. Coach Betsy Shaw called a timeout for the Lady Buffs, but didn’t have any left and was assessed a technical foul.

Saylor Clay only made one free throw at the line and made it a two-point game. On the ensuing inbounds, Kinsley Ellenburg stole a long pass but tried pushing it up the court too quickly and committed a costly turnover that sealed the game.

Washburn would run out the clock and escape with a 43-41 victory.

West Greene returns to action next Thursday night with a road game at Daniel Boone before participating in the Ladies Classic.