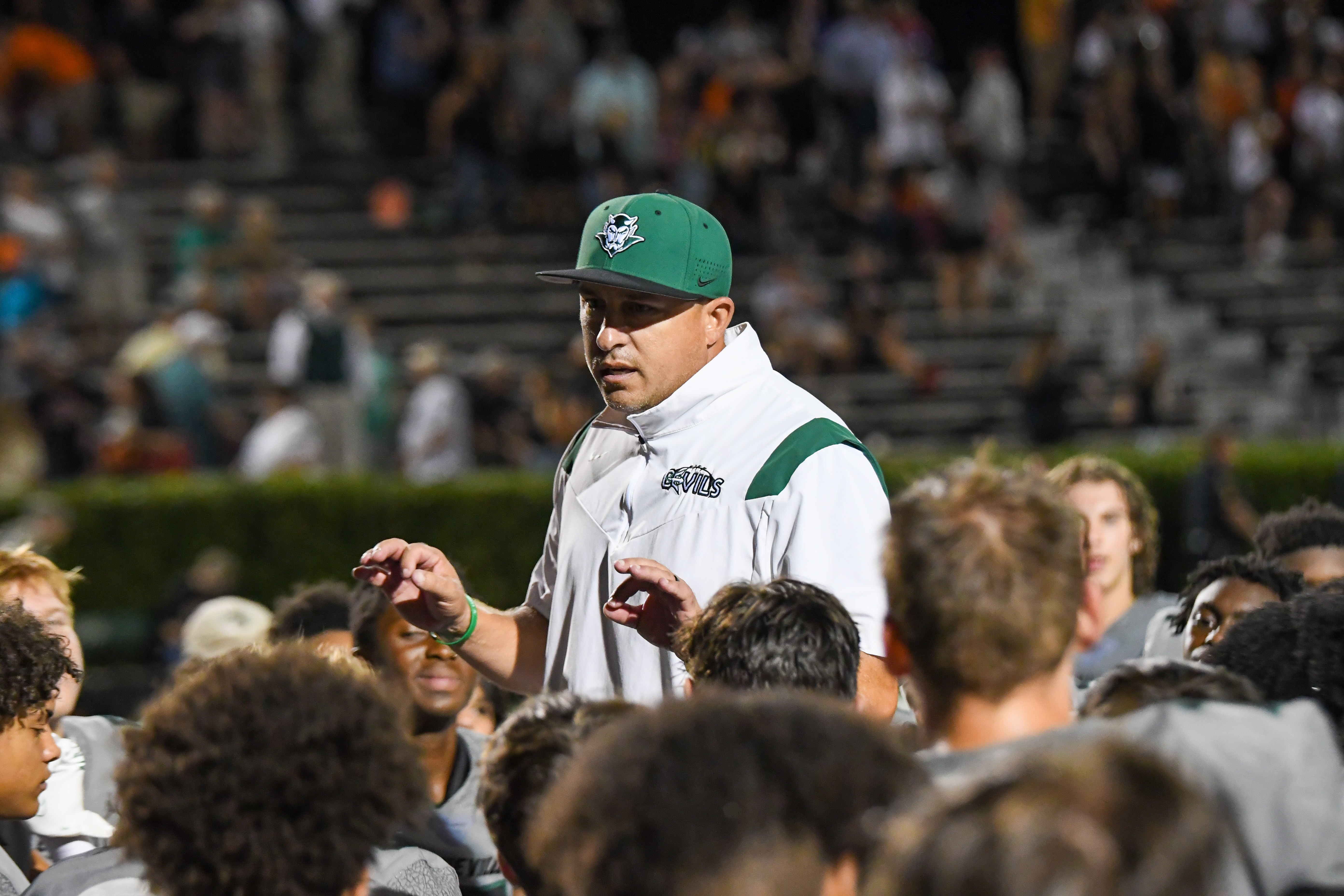 KINGSPORT - Greeneville High Coach Eddie Spradlen said it best after the game, "What a dang game!”

The game was the tale of two halves and goal line stands for the Devils.

Brady Quillen had another big night, passing for 247 yard and three touchdowns, but was picked off just three plays into the game by Tony Simpson to put the Indians near the red zone. Two plays later Jake Carson hit Jonavan Gillespie for a 21 yard gain but was forced out of bounds by Adjatay Dabbs at the Devil one yard line.

The Devil defense had their backs against the wall but stood up on four straight runs to take the ball back on downs at their own four yard line.

Greeneville then went on a 96 yard scoring drive that only took 3:42. It ended with a Quillen to Dabbs 30-yard scoring hookup. Cooper Graham added the point after touchdown and the Devils had the early led 7-0.

On the Indians net drive a 26-yard reception by Gillespie and three penalties had the Indians back inside the Devil five-yard line again. The Devils once again stood their ground on four consecutive plays and took over on downs inside their own one yard line.

This Greeneville's offense went on a 99-yard drive. Quillen had a short gain to get out from beyond the shadow of his own goal post, then hit Dabbs on a gain out to the 30 yard line. Two plays later Quillen hit a streaking Mason Laws for 69 yards and a touchdown.

Laws later said ,”We had run the same play earlier and we knew it was open and my quarterback got me the ball and I was able to take off for the score”.

To start the third quarter it only took the Indians three plays to score, all three by Brayden Simpson, the scoring play was a 63 yard run right up the middle. Titan Thomas kicked the extra point and the Indians were on the board.

Greeneville’s offense was still clicking behind the tough running of Damiem Short and Carson Quillen. Zac Chrisman had a big 31-yard reception to keep the chains moving and the drive alive. Then it was the Quillen to Dabbs connection again, this time for a 10-yard touchdown strike that put Greeneville in front 21-7 midway through the third quarter.

The Indians responded with a 15-play drive that covered 56 yard and took 7:59 off the clock. Carson capped it by finding Hayden Russell for a two-yard score on third and goal with 10:15 to play. Thomas added the extra point and the home team was within seven points at 21-14.

Dobyns-Bennett's defense got a stop a stop with 3:25 left to play and the nail biting began for the full house at J. Fred Johnson Stadium.

It was Gillespie with a 15-yard catch, then another for six yards. Peyton Franklin had a nine-yard scamper and then ran out of bounds to stop the clock at 1:02. A screen pass to Eli Wallace went for 21 yards and the Indians were inside the Devil 10.

Carson hooked up with Russell again for another touchdown with 18.4 seconds left in the game. The Indians lined up for the extra point to send the game into overtime but called time out to think about it.

After the time out they brought the offense back onto the field to go for the two-point conversion and win it in regulation. Carson found Dakari Dixon on the right side in the flat, Dixon streaked towards the pylon and it looked like he would score but Sophomore Carson Quillen seemingly came out of nowhere to chase him down and made the game-saving  tackle at the one yard line to preserve a one point victory for the Devils.

The younger Quillen said, “I gotta go make that play, I honestly didn’t know if I could get to him in time or not but I knew I had to make a play. It was a really special moment”.

When coach Spradlen was ask if he was surprised when DB called time out to go for two he said with laughter in his voice, "When you’re playing them Devils you wanna take every chance you got”.

Dabbs caught five passes for 72 yards and two touchdowns, but maybe more importantly held Jonavan Gillespie to only 5 receptions and 69 yards and no touchdowns on defense. Dabbs and Gillespie were jawing all night, the two are good friends and Dabbs said, “It was all in fun, it was great”.

Mason Laws hauled in three passes for 102 yards and one touchdown.