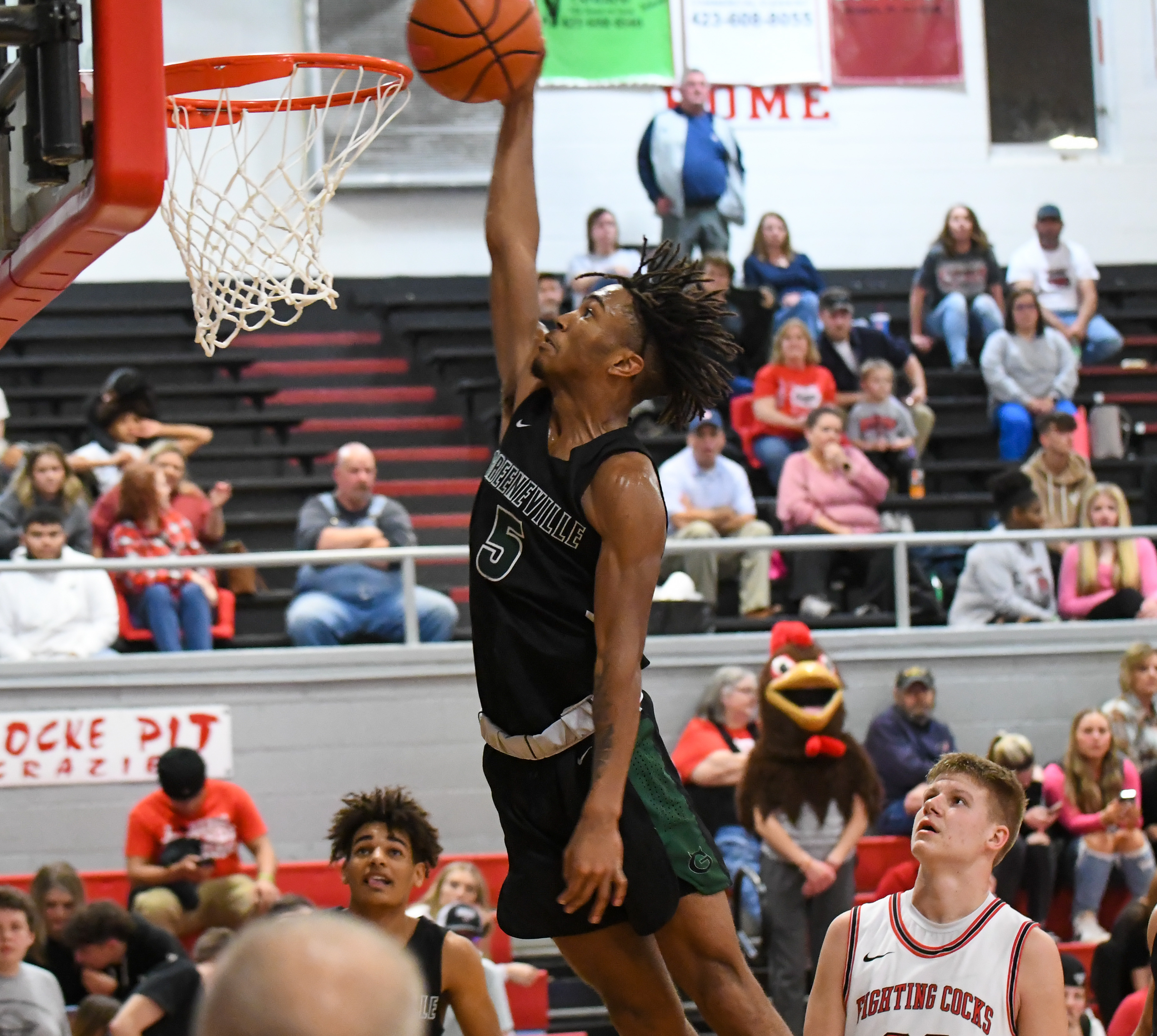 NEWPORT – Defense carried the Greeneville boys on Tuesday night as they shut down Cocke County to put itself in the driver’s seat of the District 2-3A standings.

The Devils held Cocke to their lowest scoring output of the season on the way to a 58-37 win that improved Greenville to 4-0 in league play.

“This is a huge win for us, a huge conference win. This puts us in the best position to win the conference, but we have a long way to go,” Greeneville coach Brad Woolsey said. “Tonight I feel like was a step in the right direction. I’m elated, but understand that there is still a lot of work to do. We’re going to enjoy this one for the next day or two.”

Greeneville started the second half holding a narrow 20-19 lead, but after Baylor Baxter made good on a three-point play the Fighting Cocks went in front 25-23.

With 3:36 left in the third quarter Trey Thompson found Jayquan Price open in the corner for a triple that gave the Greene Devils a 29-27 lead. The shot started a 1:45 stretch in which Greeneville went from trailing by one point to leading by eight points.

Thompson scored from in front of the rim and while Price hit from deep two more times as the lead grew to 37-29.

“It felt like we were 0 for from three in the first half, but we just kept going and once those shot started going down it really changed the complexion of the game,” Woolsey said.

The third quarter ended with Hayden Goad sinking Greeneville’s sixth three-pointer of the period as its lead grew to 40-29.

Greeneville’s lead grew to 44-30 when Thompson put back a miss early in the fourth quarter.

Cocke County scored the next seven points with Baxter sinking a jumper from the block to close the gap to 44-37 with 3:50 left to play.

From that point Greeneville got the job done at the at the free-throw line, going 12-of-14 at the stripe while on defense they shut out the Fighting Cocks the rest of the way.

Coming into the game Cocke County had been held under 50 points just twice, once in a win, but Greeneville focused on slowing its shooters while Kam Lester blanketed the dangerous Baxter and limited him to just seven points.

“What I’m really proud about is that even when the ball wasn’t going in the basket our defense never waivered,” Woolsey said. “I’m off-the-charts proud of our defense right now. The first thing we wanted to take away was the easy stuff under the basket, and I really feel like Kam did a great job on Baxter. We followed the scouting report and stayed in front of the ball, then we didn’t give up three-pointers.”

Adjatay Dabbs led Greeneville on Tuesday with 18 points while Price had 11 and Thompson 10.

Offense was hard to come by in the first half on Tuesday, but Greeneville found enough to play from in front after one quarter of action. J.D. Woolsey, Price and Dabbs all scored inside to give the Devils an early 6-4 advantage.

Kyler Hayes sank a three-pointer to give Cocke County a 9-6 lead with 1:25 left in the quarter.

Isaac McGill then set up Lester and Woolsey for a pair lay ins that allowed Greeneville to close the quarter with a 10-9 lead.

The second quarter went back and forth, and Cocke County regained the lead at 13-12 when Hayes scored from the right block.

Lester gave Greeneville the lead again at 18-17 with 1:21 left in the first half and then with 14 seconds left he made two free throws to give the Devils a 20-19 advantage at the break.

With the loss Cocke County falls to 2-1 in league play with win over Grainger and Cherokee.