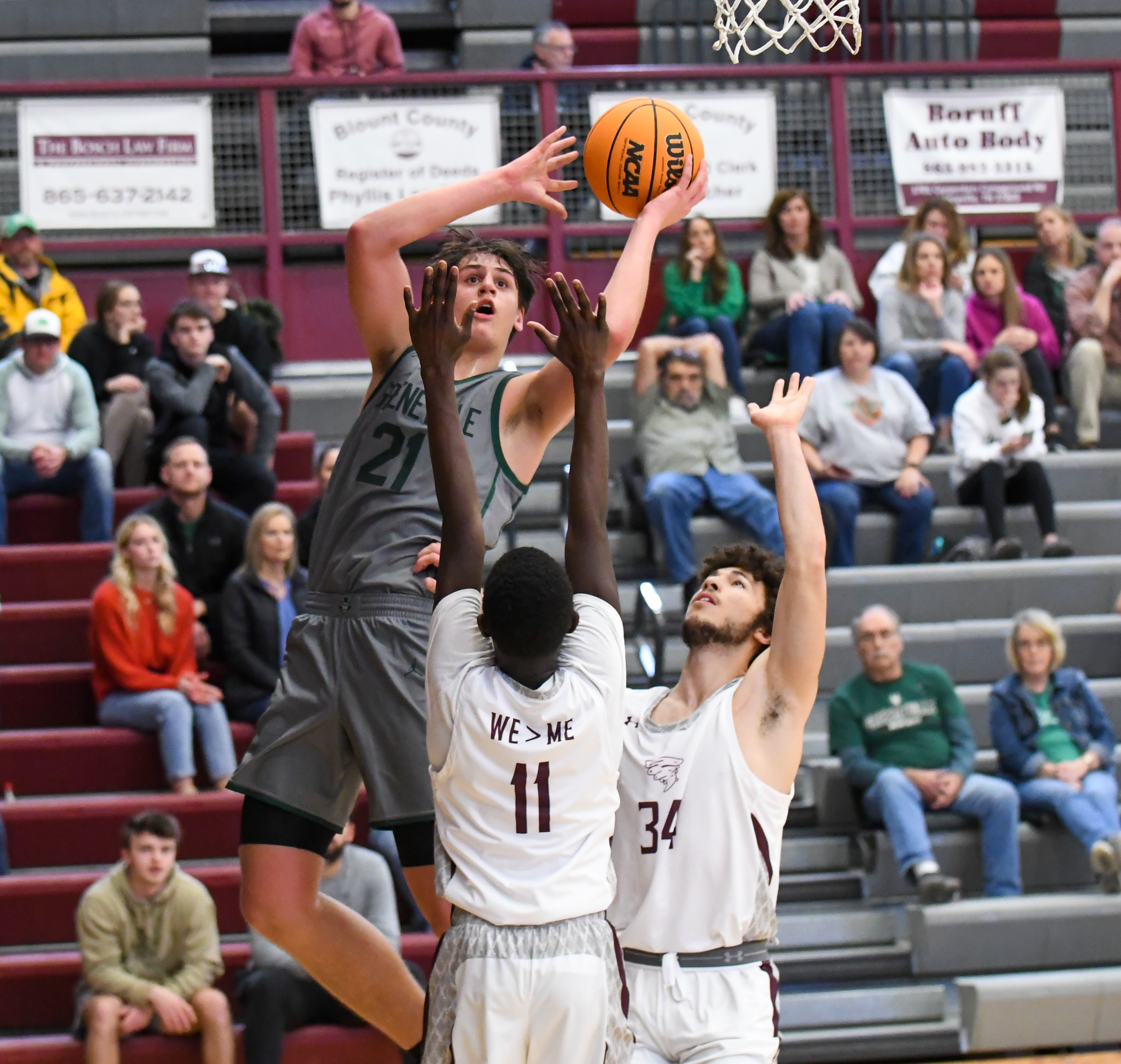 ALCOA – The Greeneville boys are still trying to put everything together, and are not where coach Brad Woolsey thinks they can be, but on Friday night the Devils dominated in the paint to take down Alcoa 58-50 on the road.

“We still don’t have the flow we need to have offensively, but Alcoa had a lot to do with that,” Greeneville coach Brad Woolsey said. “Controlling the boards was the difference. Trey (Thompson), Kam (Lester) and Nick (Thomas) did a great job on the boards. They were boxing out and working the boards. The big thing about those forwards is that they don’t take plays off. Those guys are always busting their butts, and they did a tremendous job tonight.”

Freshman forward Trey Thompson led the way with 25 points, but more importantly his long arms seemed to pull down everything that the Tornadoes did not put through the nets. And if Thompson was not getting the ball back for the Devils or powering a shot off the glass his post partners Kam Lester and Nick Thomas were the ones giving the Tornadoes trouble.

Greeneville started the second half leading 29-26, but Jayquan Price got warmed up from behind the arc to open the game up.

First Lester found Price in the right corner to get the 9-0 run started, and next it was Thompson who fired from the post to left corner for another bucket from Price. Then with 4:45 left in the third quarter Hayden Goad drove the baseline and drew in the defense before kicking it to Price for a 38-26 lead.

“That stretch was huge, and all of those threes were beautiful plays in which the ball moved,” Woolsey said. “A lot of things had to happen on each of those to get an open shot. He made three big ones in a row to give us some separation that was important in the win.”

Alcoa’s Jahvin Carter broke the streak with a pair of free throws, but on the trip the other way J.D. Woolsey slipped a pass across the lane for Lester who powered in a layup.

Carter and Brady Haun each finished out the period with five points for Alcoa as the gap closed to 45-40 to begin the final frame.

The Tornadoes kept fighting back and with 4:57 left they made the Devils nervous when Eli Graf nailed a jumper from the left wing to get within three points at 50-47.

Thompson got Greeneville’s offense restarted  when he powered in a layup from the left block. He then knocked down a straight-away trey before Price got ahead of the defense for a transition layup that completed the two minute outburst with Greeneville leading 57-47.

The Devils were able to run the clock and play tough defense the rest of the way to stay in front.

In the first half Greeneville’s offense struggled at times to get into the flow that Woolsey wanted, but it was able to take a an early lead at 7-5 when Price pulled up for a jumper from the elbow in transition.

Joseph Carter put Greeneville back in front with a three pointer, and the lead grew to 13-9 when Haun got three points the hard way.

Thompson scored the first six points of the second quarter. The final two came when he muscled through a double team for a 17-13 Greene Devils’ lead.

“Trey’s scoring was huge in the first half,” Woolsey said. “They just got their football players back and we didn’t know what the lineup was going to look like. Once we saw what it was we decided we needed to pound it inside. We finally got the hang of it and it was good to see us grind.”

Alcoa tied the game up on consecutive layups from Graf, and went in front 20-17 when Haun nailed a triple.

Thompson put Greeneville back in front 24-20 when Lester slipped him a pass while cutting through the lane. The 6’6” freshman closed the first half with five more points to give Greeneville a 29-26 halftime lead.

Thompson led Greeneville with 25 points, 17 of those came in the first half. Price finished with 17 points for Greeneville.

The Greeneville girls had a hard time figuring out how to score on Friday night as they fell to Alcoa on the road 57-40.

“You know you had  a bad shooting night when you only scored 40 points,” Greeneville coach Annette Watts said. “They hit us in the mouth first and we didn’t want to fight. We didn’t come to play. Once they took the lead we didn’t have anyone that wanted to play team ball and fight to get it back.”

While not a lot of things went the Lady Devils’ way in the loss Watts hopes that her team can at learn from going on the road and taking on a team that advanced to the Class 2A state semifinals a year ago.

“We are going to have to learn from this and games like this will make us better,” Watts said. “We’ll study this film, and I think we learned today that we have to come in focused. We can’t make excuses. We have a lot finger pointing right now and we have to stop that.”

Alcoa scored the first six points on Friday with Amelia Pfeifer laying one off the glass 10 seconds after the tip before Carson-Newman signee Karli Haworth sank a triple for the Lady Tornadoes.

Tambryn Ellenburg got Greeneville going by breaking the Lady Tornadoes’ press for a layup. Ellenburg scored Greeneville’s first six points and Chloe Marsh put the Lady Devils in front 9-6 with a three-pointer from the left wing.

Haworth hit from deep again to tie the game at 9-9, and after Greeneville’s Lauren Bailey sank a turnaround jumper from the elbow as the game went to the second quarter knotted at 11-11.

In the second quarter the squads traded buckets for the first three minutes and Kyla Jobe gave Greeneville the lead at 19-18 when she fired in a three pointer.

Alcoa answered with another triple from Haworth while Ridge connected from behind the arc twice to put the Lady Tornadoes in control at 27-21.

Just over a minute into the second half Bailey found Ellenburg open on the right wing, and the senior sharpshooter drained a trey to tie things up at 28-28.

Ellenburg then put the Lady Devils in front at 31-30 when she launched another triple with Ainsley Pfeifer’s hand in her face.

With 1:24 left in the period Ridge hit from behind the arc once more for a 40-34 Alcoa advantage.

The fourth quarter began with Alcoa leading 42-37, and that would have been enough for the Lady Tornadoes to finish the night out as they held Greeneville to just three points in the final frame.

In fact, over the final 13 minutes Greeneville managed to make just one field goal, a layup by Lindy Carter with 6:35 left to play. For Alcoa Haworth scored six points in the fourth quarter while Mak Bremer added four points.

Ridge led Alcoa with 21 points while Haworth put in 13 points.