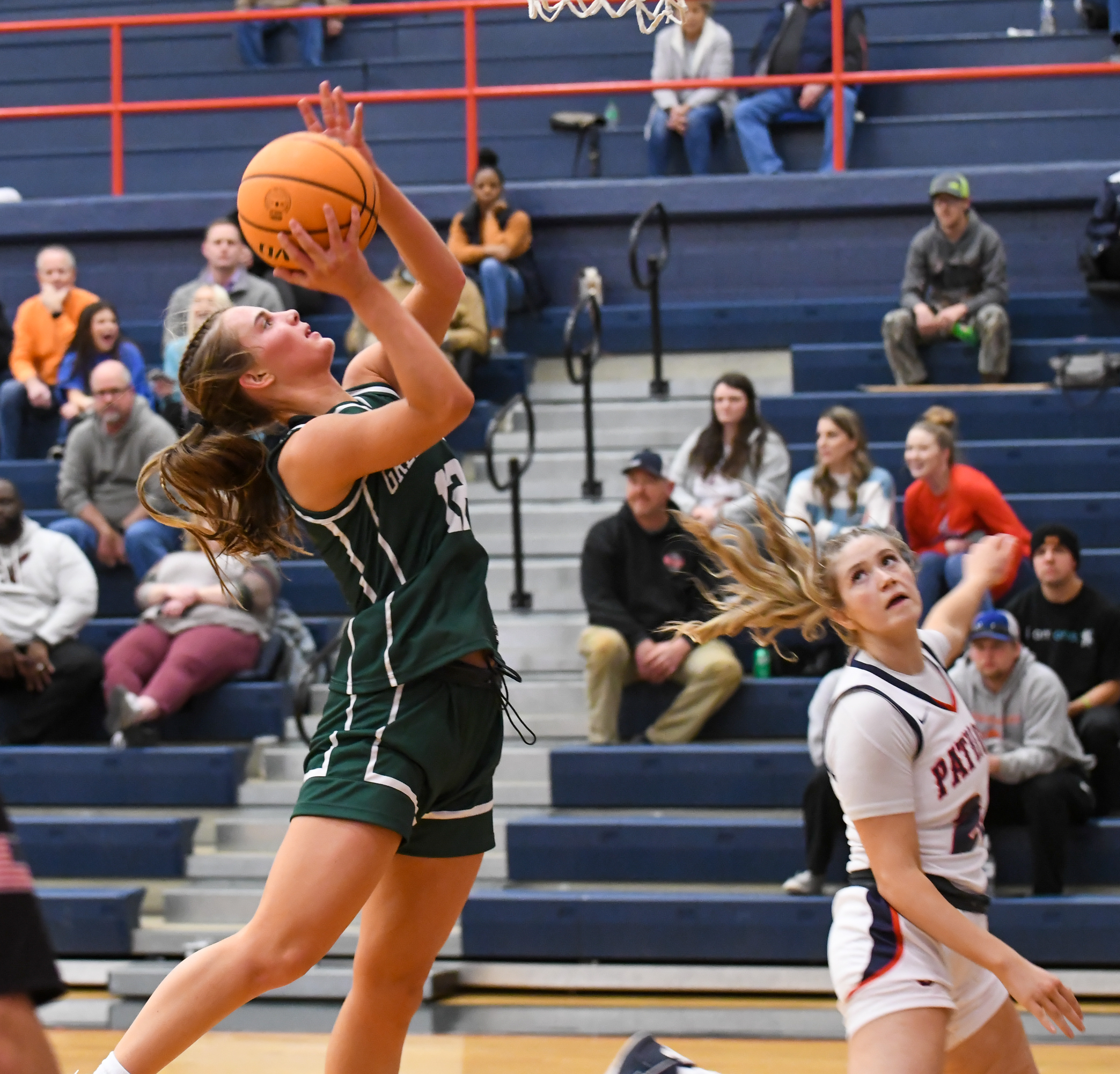 DANDRIDGE – Greeneville coach Annette Watts was not pleased with how her team finished on Monday night, but dominating defense through quarters was enough to carry the Lady Devils to a 56-44 win on the road at Jefferson County.

“Blowing that kind of lead with five seniors should never happen. We held them so well for three quarters, and I don’t know if we got complacent or they just got hot. But we have to learn to clamp down and put a game away,” Watts said.

Through three quarters Greeneville’s high-pressure defense smothered the Lady Patriots and only allowed 20 points. Most impressive in that effort was that Jefferson County’s duo of dangerous scoring guards, McKinzie Alvey and Madi Hawk, were held to a combined six points and one field goal in those first 24 minutes.

“Chloe took care of Hawk and the rest of them had trouble scoring,” Watts said. “Even though she got in foul trouble Anna Shaw did a really good job. Even Kyla Jobe came in a did a good job on Alvey. Alvey is a tough player, she’s sneaky, and I’m proud of that defensive effort on her, but I don’t have a lot good to say for how we finished defensively.”

Chloe Marsh led the way for the Lady Devils with 16 points on offense while dominating the glass. On defense she played the length of the floor, leading Greeneville’s trapping press under one basket and then stopping drives through the paint under the other.

“I sure am glad Chloe Marsh was here tonight, because without her we would have lost that ball game,” Watts said. “Chloe was playing tough, she was strong with the ball. She made some great passes, she made some great layups off of passes, but rebounding is where she just took care of business. That toughness is just from the heart, I can’t teach that.”

Marsh got Monday’s scoring started with three points the hard way on the opening possession, but offense was hard to come by for both teams in the opening frame.

Greeneville held the Lady Patriots without a field goal for nearly five minutes, but by the time Caroline Loveday’s layup went in the Lady Devils only led 7-4.

Lauren Bailey was able to beat the buzzer on a baseline inbound play to give Greeneville an 11-4 lead heading into the second quarter.

Jefferson County’s Brooke Satterfield started the second quarter started with a three-pointer and midway through the period Kamry Bolin hit from deep to tie the game at 11-11.

Marsh was able to keep Greeneville in front by going 3-for-4 at the free-throw line before Tambryn Ellenburg hit from deep along the wing to put the Lady Devils on top 17-12.

In the third quarter Greeneville was finally able to turn its defensive pressure into points, and more than doubled their offensive output in the period.

The Lady Devils got started with a 7-0 run in which Marsh scored three points.

Midway through the period Bailey slashed through the lane to put Greeneville in front 28-15. Marsh then set up Ellenburg for a triple before she stole possession at midcourt and turned it into a breakaway layup of her own and a 34-18 lead.

Lindy Carter put back an offensive rebound before Kyla Jobe turned a steal by Bailey into an easy two points. The quarter then ended with Carter putting in a 35-foot buzzer beater that gave Greeneville a 41-20 advantage.

In the fourth quarter the Lady Patriots had to play more desperate, and made their best attempt at a comeback. While the Lady Devils’ lead was never in question Watts was not pleased that her squad could not put the game away.

Hawk scored a quick seven points in the first 2:11 to close the gap to 43-27. Greeneville answered with a corner three from Ellenburg and layup from Marsh to make it a 20-point game again at 50-21.

In a 1:28 stretch the Lady Patriots scored 10 points with Satterfield and Bolin each hitting from behind the arc to shrink the deficit to 51-39.

Over the final minute Anna Shaw went 5-of-6 at the foul line to keep the Lady Devils in front on the way to a 56-44 win.

Shaw finished the night with 10 points and Bailey added 12 points for Greeneville. Hawk scored 13 points for Jefferson County, with 10 coming in the fourth quarter.