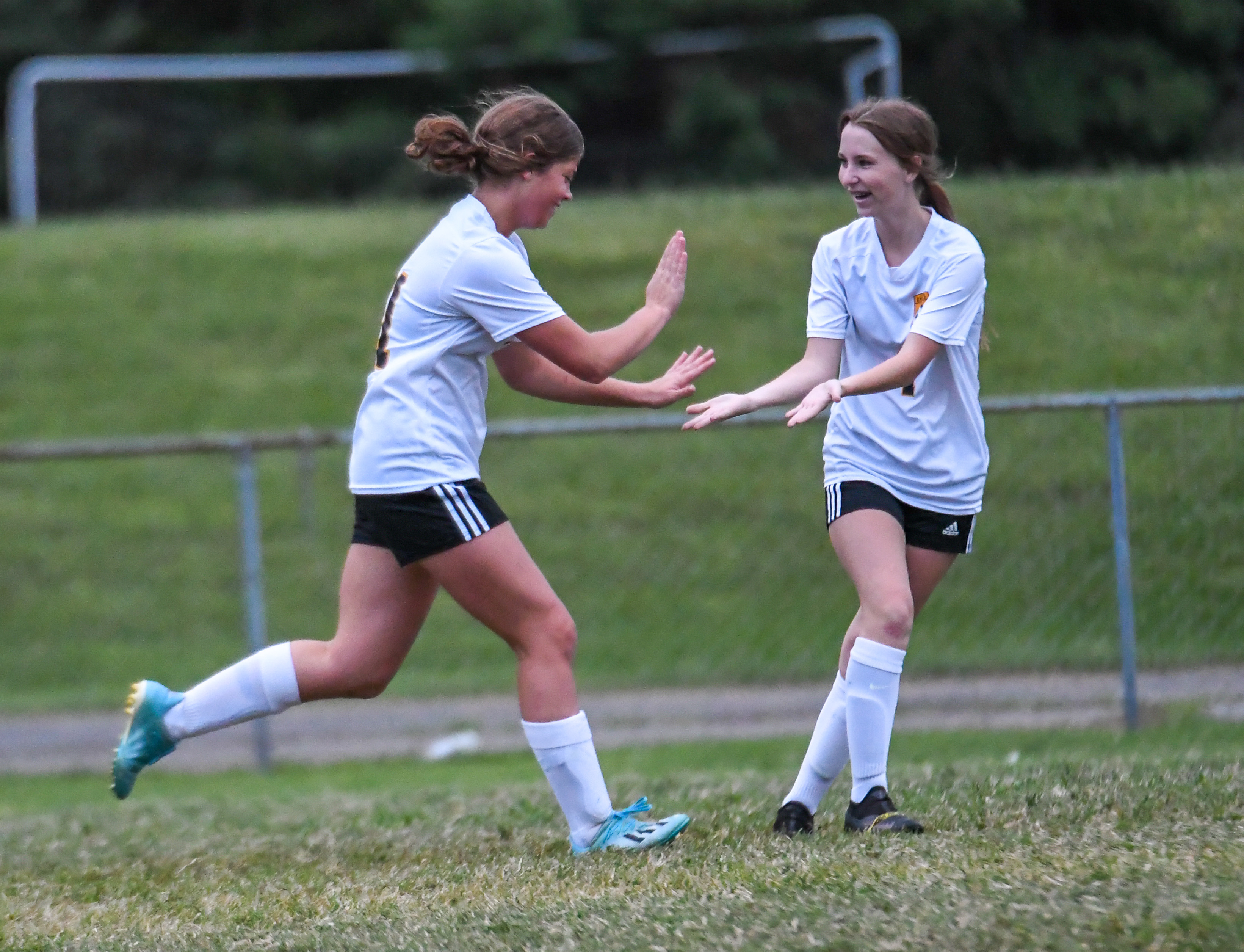 The Chuckey-Doak soccer team had  12 different players to find the back of the net on Tuesday evening as it picked up a 12-0 win over West Greene, and only needed 40 minutes to do it.

“Twelve girls scoring is impressive. We saw some of our defensive girls sprinting forward and scoring goals, we saw some overlapping runs, and a little more sprinting tonight,” Chuckey-Doak coach Anna Ricker said. “It’s good to see a lot of girls step up tonight. We have been working on our shooting and tonight we were really working on finding the corners, which I hope pays off down the road.”

It only took 30 seconds for the Lady Black Knights to find the first goal of the night. Kylie Malone started the play by dribbling through the defense. As she approached the box she passed to Faith Rice coming up the left side. Rice fired from 10 yards an gave Chuckey-Doak a quick1-0 lead.

Just over a minute later Malone again wove through the Lady Buffaloes’ defense and this time she pulled up to shoot herself, knocking in a shot from 12 yards for a 2-0 lead.

The scoring did not slow down and in the fifth minute Rice stole the ball from West Greene’s back line. She quickly moved the ball to Hailey Love on the right side who launched a shot from a tough angle and extended the lead.

At that point the Lady Knights emptied the bench with its second platoon of players, but the fresh legs kept up the scoring barrage. On the day Chuckey-Doak played its entire roster and moved different combinations around the formation which Ricker hopes prepares some of here girls to play outside their comfort zones if called upon down the road.

“You never know when injuries are going to happen, and as you get into the postseason it’s valuable to be able to move girls around,” Ricker said. “I talk about our depth all the time, but we really can go deep into the bench and you never know where those girls are going to be needed. It’s good to see them do different things and have girls get experience playing different positions.”

In the eighth minute Layla Fox took possession away from the Lady Buffaloes on a throw in and charged up field where she sent a pass to Addy Bradley who fired from the right side and snuck her shot inside the left post.

Fox got in on the scoring in the 12th minute when she pulled up from the top of the box and sent a low screamer into the left corner of the frame.

Next up was Hailey Williamson who played her own rebound back into the net for a 6-0 Chuckey-Doak lead.

Not only did Chuckey-Doak score 12 goals on Tuesday but the Lady Knights did so while using just 21 shots, meaning they made more shots than they missed in the District 1-A victory.

In the 20th minute West Greene played a ball back to the keeper that was picked up which led to an indirect free kick from the corner of the six-yard box. After a quick touch from Hope Rice Sarah Wright hammered a shot just under the cross bar into a goal jam-packed with Lady Buffaloes.

In the 25th minute Liliana Jimenez took possession away in the box and caught the Lady Buffs on their heels when she punched in a shot for an 8-0 advantage.

Next Aliah Campbell played a long pass ahead to Kalee Delotto. Delotto darted through the defense and fired a shot inside the left post in the 32nd minute.

One minute later Niome Merrill scored on a penalty kick after a hand ball in the box for a 10-0 Lady Knights lead.

In the 37th minute Madison Karriker sent the ball ahead to Hope Rice who came into the box from the right side. The keeper got a hand on the shot but it still managed to find the back of the net.

Karricker scored the last goal of the night on a long shot that she curled in just before halftime.

The game was ended after one half of play due to the TSSAA’s mercy rule.