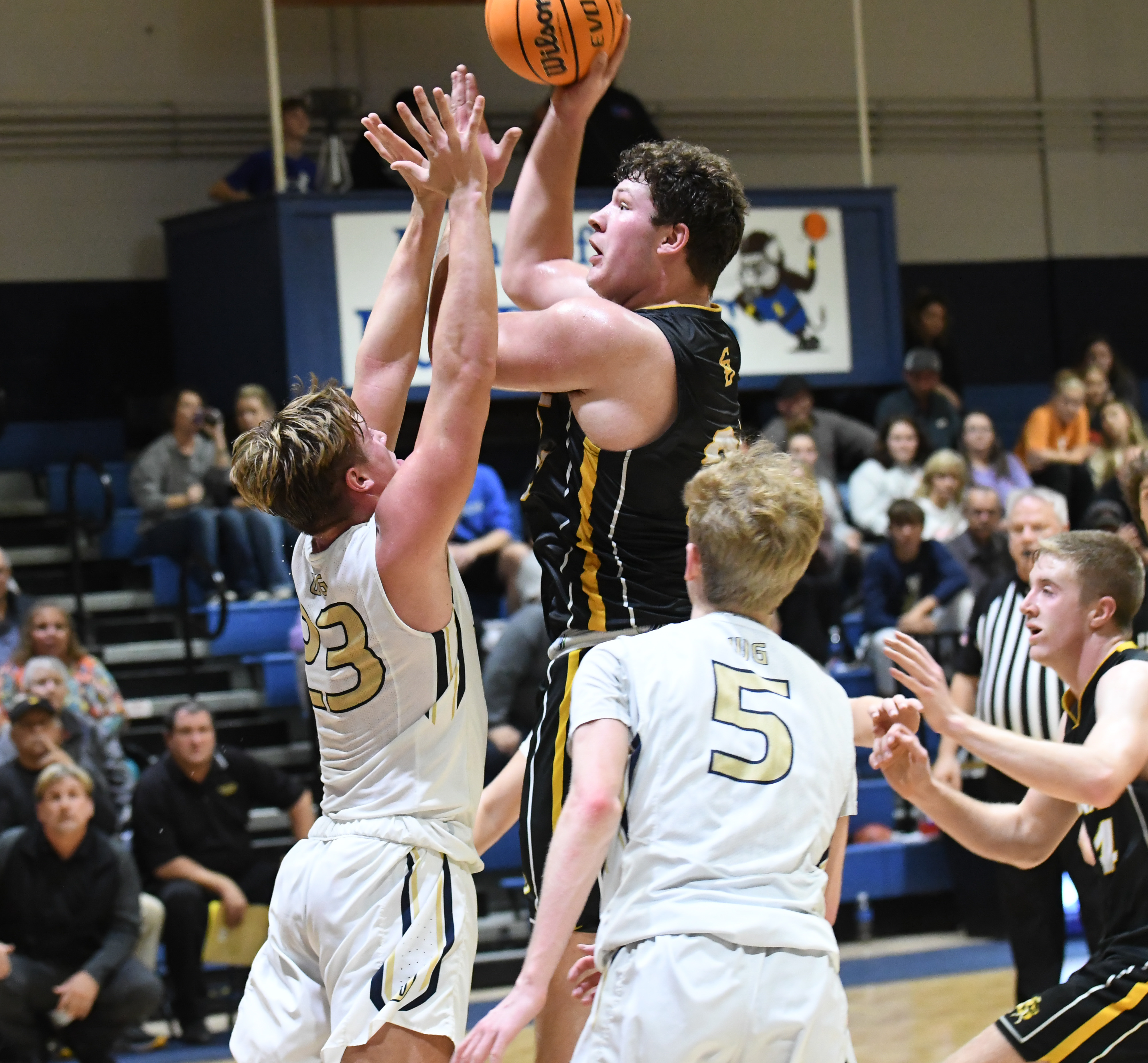 The Chuckey-Doak boys figured out how to make enough stops in the fourth quarter on Tuesday night to get past West Greene with an 83-75 win while improving to 2-0 in District 1-2A play.

“It took us three quarters to start playing defense, and we have to do better than that,” Chuckey-Doak coach Sam Broyles said. “Don’t get me wrong, they have some guys in Leyton Frye and Ethan Turner. But our defense did pick it up late and that was the difference. And when you are trying to win a regular-season district title you have to win some of these road games. You want to try to win all of your home games, but getting this one tonight was a big win.”

The Black Knights started the fourth quarter leading 58-54, but after a steal on the baseline by Leyton Frye that he put back in the bucket quickly West Greene closed the gap to 60-58.

Chuckey-Doak then got a layup from Christian Derry on an inbound play before Cadin Tullock went coast to coast to push the lead back out to 66-58.

The Knights’ lead grew to 72-62 after Derry powered back an offensive rebound before Isaiah Treadway knocked down one at the free-throw line.

Frye kept the Knights from running away by scoring eight points over the final four minutes. Chuckey-Doak did take an 11-point advantage three times in the closing minutes, but West Greene’s Conner Campbell sank a three-pointer just before the buzzer to narrow the margin to eight points at the finish.

Tuesday’s action started with West Greene taking a 7-2 lead in the early going after Frye knocked down a step-up trey from the right side.

Derry answered with a triple for the Knights and then he drained a pair of jump shots from the paint to give Chuckey-Doak its first lead at 9-7.

“Christian wasn’t feeling good tonight, but he was huge at the beginning with his scoring, and then late he grabbed some big rebounds for us.” Broyles said.

After Frye grabbed an offensive board Turner got West Greene going again with a lay in, and then he rolled in a hook shot for a 15-11 Buffs lead.

On the first possession of the second quarter Chuckey-Doak swung in front on a put back by Tullock, but West Greene followed with a pair of three-pointers from Campbell to regain the lead at 23-22.

The teams then traded runs with Chuckey-Doak scoring seven straight with Dillon Shelton putting in five of them. West Greene followed by scoring six in a row.

Frye darted through the lane to knot things at 31-31 and then Turner struck from deep to give the Buffs a 34-31 advantage.

A three-pointer from Tullock with 59 seconds remaining in the half gave Chuckey-Doak a brief lead at 36-34, but the teams went to halftime tied at 38-38.

The third quarter went back and forth with five lead changes and three ties.

Shelton gave Chuckey-Doak its biggest lead at 46-42 when he took a steal the distance for a break-away layup.

Turner tied the game with a jumper from the top of the lane, and he gave the Buffaloes a 52-51 lead by sinking a turnaround jumper from the block through contact before turning it into three points.

A trey by Brock Rush gave Chuckey-Doak a 56-52 lead before Murvin sent the Knights to the fourth quarter leading 58-54.

Tullock led Chuckey-Doak on Tuesday with 26 points, Derry had 13 points and Treadway put in 12 for the Knights.

Frye led all scorers with 27 points, Turner added 19 for the Buffaloes and Campbell scored 13 points.