Chuckey-Doak Gives Catholic a Scare, But Falls 41-14 In Opener 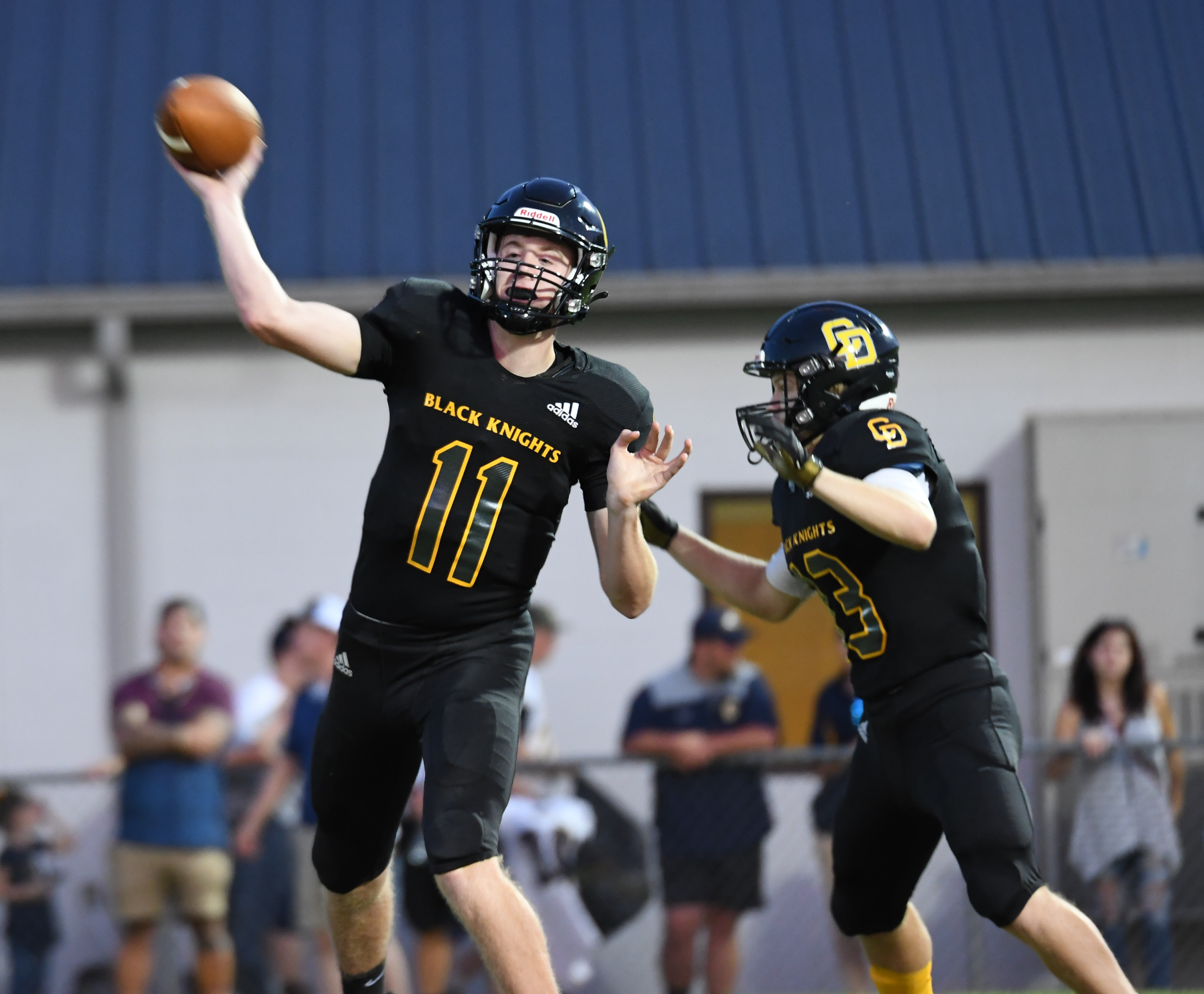 Chuckey-Doak Gives Catholic a Scare, But Falls 41-14 In Opener

Chuckey-Doak fought hard and put together a solid run in the second quarter on Friday night, but in the end could not keep up with Knoxville Catholic in 41-14 season opening loss.

“We stuck to our plan and what we worked on all week. Controlling the pace of the game, fighting on defense, and not allowing stuff to get crazy on special teams. And we did that,” Chuckey-Doak coach Dallas Kuykendall said. “Flat out effort out of those guys. It was really good.”

The Fighting Irish started hot from the opening whistle. Quincy Pannell took an inside handoff through the middle for a first down gain on the first play from scrimmage. Catholic would not take long to score as Braylon Harmon beat the secondary deep to catch a pass and turn on the burners to score six on the second play of the night.

On the Irish's second series Jayden Neal connected with Sam O’Leary after two plays to score another six and increase their lead to 14-0.

Although the offense was struggling, Chuckey-Doak's defense answered by standing tall with a stop that woke up the whole team. Rio Little rushed through the tackles and came away with a huge sack in the backfield for a loss of nine yards.

Catholic would gain 17 yards on two plays and be a short distance away from the first down. The Black Knights didn’t back down and stripped the ball carrier on 4th down. Austin Smith pounced on the leather and handed the ball back to the offense.

The offense finally caught their break on three-straight first down plays.

Tullock found Little on a deep pass for a big chunk of yards. Isaiah Treadway took a short pass for 10-yards after making a defender miss and Brock Rush took the Black Knights even further down the field on a sprint down the sideline on a swing pass.

Treadway drew a flag on a jump ball at the goal line and moved Chuckey-Doak closer after the penalty yards were tacked on. They would find themselves facing a fouth down situation and almost added six to the board.

Tullock stepped back in the pocket and saw an open Brock Rush in the end zone but over threw him to end the drive and remain scoreless for the moment.

The defense kept fighting as Austin Morris made his presence felt by tipping a low pass away on a deep attempt. Little made a great form tackle to stop the running back short of the first down marker on a third and two play. Will Garber put a shoulder down and stopped the tailback behind the line of scrimmage to force a turnover-on-downs for the second-straight drive.

“Kudos to those guys. They flew around all night. We had a plan and they executed,” Coach Kuykendall praised his defense.

When Catholic got the ball back again Jaren Sensabaugh did his best Randy Moss impersonation once back on offense and leaped up to grab a pass over the head of Morris. Unlucky breaks occurred on the Black Knight’s behalf and two pass interference penalties moved the Irish closer to the end zone.

Quincy Pannell punched in another score for Catholic's lead grew to 21-0.

Brasen Murvin had struggled up to this point to pull off a big run but finally found that opportunity with under five minutes left in the half. He broke off a 24-yard burst on third and 12 to keep the drive alive.

The Knights received some help due to another pass interference call and moved the ball to midfield. After a three-yard rush from Murvin, Tullock stepped back and launched a deep pass to Isaiah Treadway who was tripped up in the red zone. That drew another penalty and moved them closer to pay dirt.

The Black Knights would catch their break and score their first touchdown of the season courtesy of Austin Morris. Tullock scrambled on a passing play and found the wide-open Morris in the end zone. Morris would get caved in by two defenders but still come down with the football for six points.

Both players would hook up again for the two-point conversion and Chuckey-Doak would cut into the lead and make it 21-8.

“Tullock is a gamer and he rose to the competition,” Coach K mentioned. “He did well with doing what we asked him to do and we saw some things that we thought we could hit and he took his chance and hit them.”

The Knights would catch everybody, including the Irish, off guard and pull off a successful onside kick and put themselves within one possession of the lead before halftime.

They marched down the field in under two minutes to score a quick touchdown with Rio Little making the grab in the end zone.

The Black Knights strong 2nd quarter wouldn’t be over yet as Brock Rush stepped in front of a pass and intercepted the ball with time left on the clock for a couple more plays.

Chuckey-Doak couldn’t make a connection to end the half and they settled for trailing 21-14 entering the intermission.

In the third quarter Pannell would stick his head down and mow over a few Black Knights to move inside of the third-yard line before breaking the plain on the next play for a touchdown. Catholic would pull ahead further and give themselves some comfort with a 28-14 lead.

In Catholic's next series Jayden Neal took it upon himself to move the ball with his own feet and gained 27 yards on a scramble play.  Pannell gained 28 yards to move right outside of the red zone and then scored his third touchdown of the night from 22 yards out to extend the lead to 35-14.

Back on offense, Isaiah Treadway would lay out and make a diving catch for a first down to liven the Chuckey-Doak sideline. Brock Rush would convert their next first down with a reception over the middle.

Treadway almost came down with a full extension grab on fourth down but had the ball knocked away, but not without drawing a penalty and a new set of downs.

But a fruitless set of downs led to another Black Knight punt that was run back to the house by Braylon Harmon, but negated due to multiple flags on the field.

Pannell picked up 45 yards on two-straight plays before Tyreek King sprinted 40 yards downfield for a touchdown catch to extend the Fighting Irish lead to 41-14.

Elijah Elliott and Cayden Masters would blow through the line to claim two sacks and keep Catholic off of the scoreboard again late in the contest.

Unfortunately, Chuckey-Doak couldn’t put anything on the scoreboard after the second quarter and fell to Knox-Catholic 41-14 in the end.

The Black Knights return home next week to host Happy Valley for their first home game of the year.