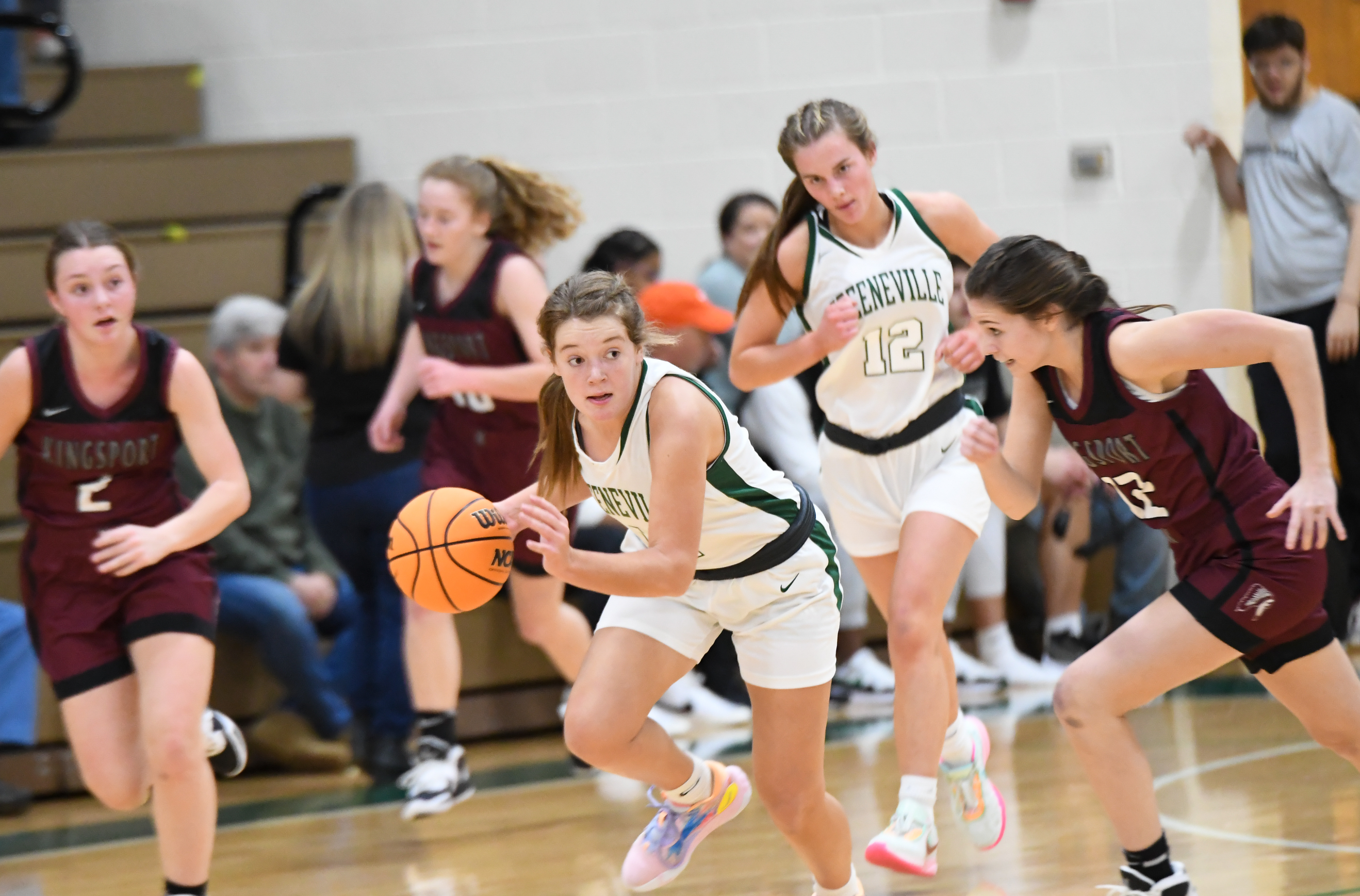 Lindy Carter came to play on Tuesday night as she pushed Greeneville out in front of Dobyns-Bennett before the Lady Devils collected a 68-53 in front of their home crowd.

Carter finished the night with a team-high 20 points, and when she wasn’t scoring she was setting up her teammates and crashing the boards. Her biggest impact came in the second quarter as Greeneville opened up a double-digit lead. She scored 10 points in the frame, and was a contributor to all 18-points the Lady Devils scored in the quarter.

“That was huge, and I told Lindy that she is always so solid on defense but we have to have her contribute on offense,” Greeneville coach Annette Watts said. “She did that beautifully tonight. She settled in tonight and took it to them. She always gives you everything she has, and that’s all you can ask for."

Tuesday’s second quarter started with Greeneville clinging to a 11-10 lead, but on the period’s first possession Carter sank a triple from the top of the key.

Hannah Frye answered with three points the hard way on the other end of the floor before Carter started a 9-0 run by putting back a miss. Carter then set up Lauren Bailey for a triple before she finished the run by powering past a defender for a layup.

With 4:11 left in the second quarter  Carter hit from deep along the right wing to move the lead to double digits at 26-15, and Greeneville took a 29-18 lead into halftime.

Early the third quarter Greeneville’s advantage grew to 36-21 after Anna Shaw came up with a pair of steals. The first came at midcourt and set up Bailey for a jumper from the elbow. On the second steal she swiped the ball under the Lady Indians’ basket and went coast to coast for a layup.

“That’s what we have to do. With our size, as small as we are, we have to create easy buckets off of our traps,” Watts said.

Caroline Hill answered with a three-pointer for Dobyns-Bennett, and her outside shooting is what kept Greeneville from running away on Tuesday as she hit from behind the arc four times in the third quarter.

For Greeneville Tambryn Ellenburg and Chloe Marsh each scored five points in the third quarter for a 48-37 lead.

The Lady Indians were able to close the gap to eight point at 49-41 when Frye scored in transition, but then it was Shaw’s quick hands that got Greeneville going again when she jumped a pass and turned it into a breakaway layup. Bailey pushed the lead 54-41 when she connected from behind the arc.

Marsh took a long rebound the length of the floor for a layup, and Ellenburg drained a three-pointer to push the lead to 59-44.

Bailey scored seven points in the closing stretch for Greeneville as part of her 18-point night while Marsh and Ellenburg each put in 11 points.

“Putting four players in double figures was big tonight. They had one girl have a big night, but we had four, and it could have been five had Anna not had some foul trouble,” Watts said.

Hill led all scorers with 26 points and Frye added 16 points for Dobyns-Bennett.

In a battle of defending state champions Class 4A Dobyns-Bennett caught fire from behind the arc and broke Class 3A Greeneville’s 14-game home win streak with a 71-53 win on Tuesday.

“Dobyns-Bennett came in and executed really well, and I don’t know if our plan on defense was quite where it needed to be,” Greeneville coach Brad Woolsey said. “We didn’t stay in front of some guys and we paid for it, they finished at the rim and finished and the three-point line.”

Tuesday’s second half began with the Indians leading 30-25, but Jonavan Gillespie wasted little time adding to that advantage by sinking a pair of deep three-pointers in the first 40 seconds.

The Indians ended up hitting six three-pointers in the quarter with Brady Stump adding three of them.

Stump and Gillespie each hit five three-pointers on Tuesday while going a combined 10-of-16 from behind the arc. Gillespie led all scorers with 26 points while Stump put in 24 points.

“Those are two of their best scorers from that state championship team, and they showed that experience tonight,” Woolsey said. “You have to have a hand in the shot pocket. If you let them get it up you are in trouble. We didn’t make them be drivers tonight, and I don’t know it our energy was where it needed to be either.”

Greeneville finally got going in the second half when Trey Thompson rolled in a hook shot through contact and turned it into three points. Kameron Lester followed with a jumper from the short corner to close the gap to 39-30, but that was the last time it was a single-digit game.

Stump connected on consecutive treys in a 20-second span to put Dobyns-Bennett in front 53-34.

Thompson came up with an old-fashioned-three-point play for the Devils, but then Stump and Dace Potts hit on more three-pointers to send Dobyns-Bennett into the fourth quarter leading 59-39.

In the fourth quarter Greeneville’s Jayquan Price got to the basket for eight points, but the Devils were never able to really challenge the lead as Dobyns-Bennett earned an 18-point win.

The first quarter was slower paced, but Greeneville was able to tie things at 9-9 when Lester hit a three-pointer from the right corner.

Lester led Greeneville on Tuesday with 14 points and Thompson added 11 points. The post duo came up big again for Greeneville as they also did a good job of controlling the boards despite what the Indians were able to do on the outside.

“Those two did a great job of battling,” Woolsey said. “We still have to figure out what our identity is on offense. I’m excited about these next two days of practice as we really try hone in and find out who we are.”

Gillespie scored the final five points of the first quarter to take a 14-9 lead.

In the second quarter Greeneville got a triple from Isaac McGill and three points the hard way from Thompson to close the gap to 18-15.

With 2:54 left in the first half Draven Taylor stole an inbound pass and sent it ahead to Lester for a layup that cut Dobyns-Bennett lead to 22-21.

The Indians closed the half with three-pointers from Stump and Gillespie to take a 28-22 lead before J.D. Woolsey hit from deep for the Devils to make it 30-25 at the break.