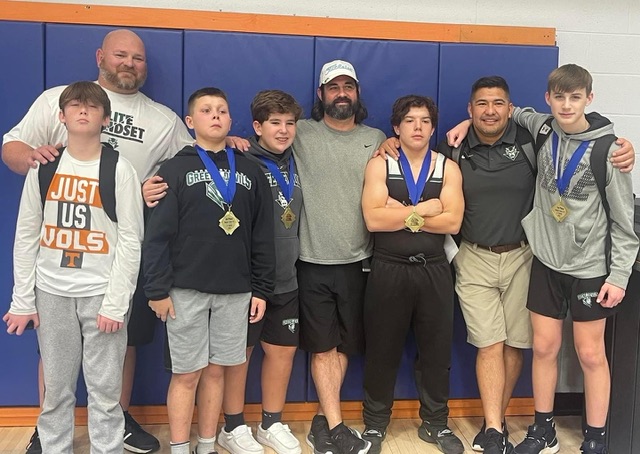 The Greeneville High School boys wrestling team traveled to the Walsh-Jesuit Ironman in Ohio over the weekend.  Ironman is one of the toughest high school tournaments in the country.

Colin Dupill brought a well-earned 4th place finish back.  He improved from 7th last year.  Carson Dupill finished 4-2 and was one match shy of medaling.  Hunter Mason finished the weekend 2-2.

The girls traveled to Stone Memorial High School for the I-40 Clash.  Allie Shelton came away with a dominating 1st place finish – 4 matches and 4 pins in the first period.  Rhyne Johnson was 4-1 on the weekend while placing 2nd.

The girls and guys team will travel to Delaware this weekend for the Beast of the East.

On Saturday, Greeneville Middle School hit the mat for the Individual Conference Championship. GMS has a very young squad with great work ethic, and it showed in the results this year. GMS finished in second place behind Ross N Robinson. After placing only 9 wrestlers in both divisions in 2021-2023, Greeneville easily surpassed that number in 2022-2023. GMS recorded 21 total medals in both divisions this year.

In the Varsity Division, all wrestlers contributed to the team score by winning matches. Six wrestlers received a medal. Gideon Ellenburg and Mack Hall both finished in fourth place. Jake Hall lost in the finals to the lower-weight best wrestler of the tournament to finish in 2nd place. Joey Hickerson also made the finals and finished second to a wrestler that tied for upper-weight best wrestler of the tournament. Brylan Rhodes became a conference champion with a pin in 1:52. Hayden Moore also became conference champion with a 19 second pin in the finals. Several wrestlers lost only one match away from a medal.

In the JV portion of the tournament GMS also had a great day. Lucas Bennett, Isaac Dabbs, and James Treptow placed 4th. Graham Freshour, Ty Wilhoit, Douglas Blake, and Brayden Shelton all placed third. Ayden Wampler, Greg Tester, Austin Fuller, and Parker James all reached the finals and came up just one win short of the championship. Champions of the JV tournament are Braxton Tweed, Weston McGill, and Seth Blunt.