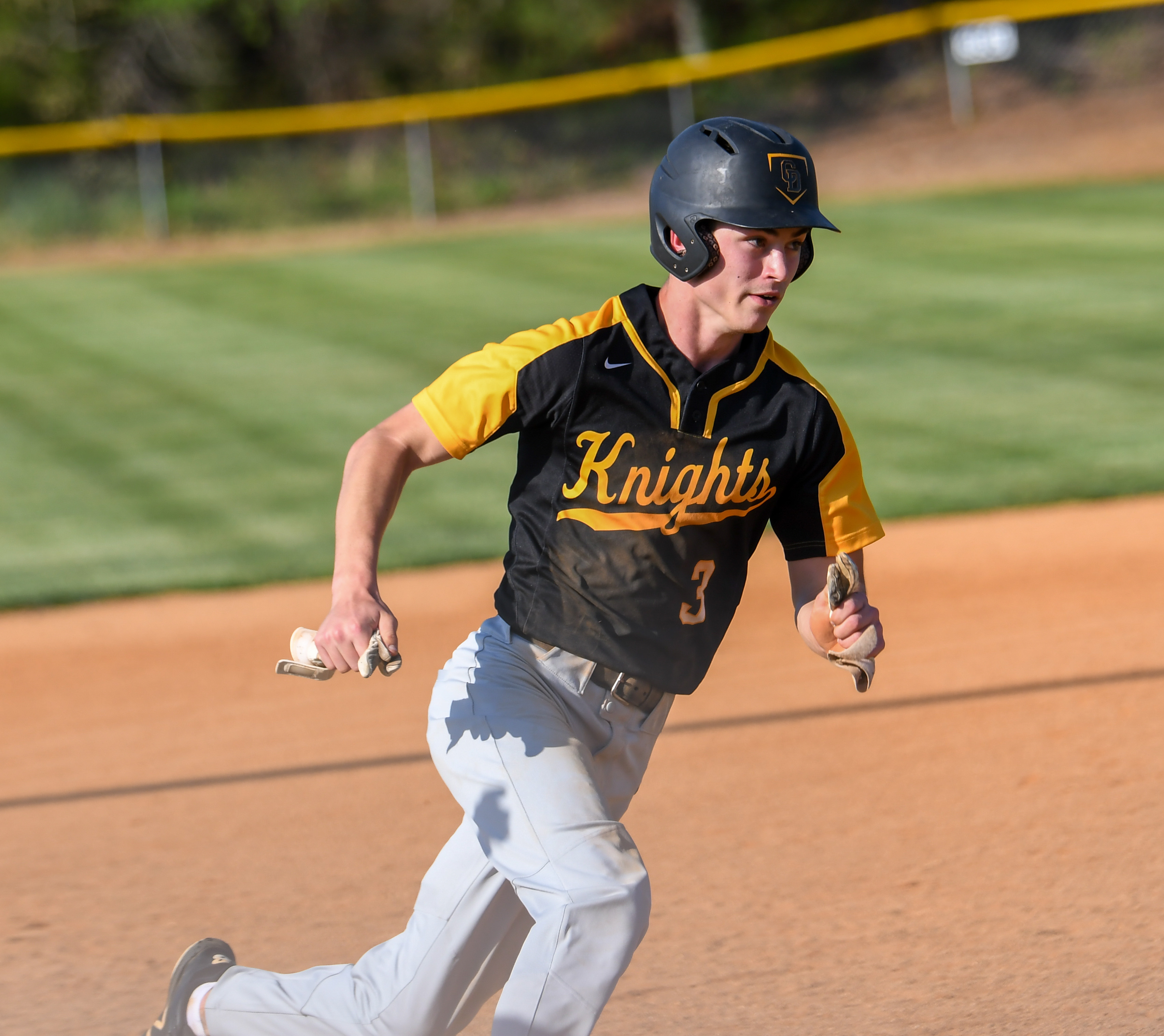 Chuckey-Doak stood its ground late and thwarted a Rebel comeback in the seventh inning to escape Tuesday with a 5-2 victory.

The Rebels were able to hold Chuckey-Doak to a modest five runs with a mixture of great pitching, but couldn’t match up with the Black Knights at the plate.

“They keep us on our front foot and it’s hard for us to do anything with that,” Chuckey-Doak head coach Jimmy Willett said. “We have to learn to adjust to that and not let it get to our heads.”

The Black Knights remain perfect in District 1-2A play heading into their final conference game with the Rebels this Friday, and are riding a 12-game win streak.

The Rebels' defense had Dustin Crum’s back covered in the opening stages of the matchup. Crum would force all three Black Knight batters to fly out or ground out to post a zero in Chuckey-Doak’s run column.

Nate Lisenby delivered the first hit of the night with a liner over Connor Lamons head at second base. Cole Lamons remained strong on the mound and made it out of the inning clean with a strikeout of Crum and the help of Wade Fletcher at shortstop. Fletcher tracked down a ground ball in the infield and made the throw to first in time for the out.

The Rebels continued working at the plate in the second inning. Jesse Lawing drew a walk and advanced to second base after TJ Buckner laid down a bunt, but they couldn’t make anything happen on the field after Cole Lamons would force Seth Franklin to ground out and end the inning.

Dillon Shelton posted Chuckey-Doak’s first hit with a single into right field. Datyn Bowman collected the second hit a few pitches later into the opposite side of the field.

Christian Derry laid down a sacrifice bunt to move both runners into scoring position while falling as the first out of the inning. Derry would put the Black Knights in perfect position to pull ahead with the early lead in the ensuing at-bat.

Austin McBurnett launched a fly ball into right field for a sacrifice fly that scored Dillon Shelton from third and put the Black Knights ahead 1-0.

“Austin’s great. Couldn’t ask for a better player,” Coach Willett stated. “He’s like a lot of these kids here that have hit good all year."

Cadin Tullock almost provided another run with a hard-hit liner into right field but Jesse Lawing’s hops in right field prevented that from happening with a leap of desperation at the last moment to snag the out.

Cole Lamons spun another quick inning on the mound and forced another trio of Rebels to go down through contact. The senior would contribute in many different ways on the night and help support himself on the mound with an RBI in the following inning.

“Cole does a good job pitching,” Coach Willett mentioned. “He puts it over the plate and he’s tough to hit.”

Jaylen Willett smacked a double into the right field gap and later turned that into a run once Cole Lamons legged out a throw to first to get the run across. Luke Myers became Lamons’ courtesy runner and put up another run with his smart decision making on the base path. Myers stole second and then third on his way home to score after the throw would elude Dustin Crum’s glove at third base.

South Greene attempted to put something together in the fourth inning and threatened to score with two runners on first and second. Lamons adjusted on the rubber and forced Buckner to ground out and end the inning.

McBurnett led off with a standing double that bounced off the wall in right-center to set up another scoring opportunity for the Knights. He made it to the plate after Tullock drove the senior home with a single one at-bat later. Chuckey-Doak would increase their lead to 4-0 going into the middle of the 5th.

Derry replaced Lamons on the bump and made quick work of South Greene’s offense with three consecutive strikeouts .

“He throws strikes and I think he’s gained velocity,” Coach Willett said. “He’s just got to keep working and getting his legs stronger. He’s going to be a player he’s good.”

Nate Lisenby made a statement in his first inning of work on the mound in the sixth by forcing the Black Knights into a fruitless frame.

Tucker Brown attempted to lift up the South Greene dugout with a leadoff single in the bottom half. Dillon Shelton was quick to make the play in the hot corner, but Brown was quicker to the bag to reach safely.

Hayden Hartman dropped a fly ball into right field to put runners on the corners with Brown going to third. Jesse Lawing loaded the bags by drawing a walk.

The Rebels suddenly had a chance to cut into Chuckey-Doak’s lead with three aboard and two outs.

Buckner laced a two-RBI-double over Willett’s head at shortstop to call Brown and Hartman home and move Lawing over to third to immensely shift the momentum in the matchup. Willett forced the Rebels to head back to the dugout by controlling a grounder and throwing it to Tullock at first base for the third out.

The Rebels drew closer to the lead with Buckner’s swing and only trailed 4-2 entering the final inning.

Austin McBurnett plated Datyn Bowman from third base to extend Chuckey-Doak’s lead to 5-2 at a crucial point in the game to gave it some extra cushion.

The Black Knights returned to the field with only three outs left to seal the win.

Brendan Lisenby would get a ball past Dillon Shelton at third base and Nate Lisenby would walk to first on a full count of balls outside the zone to put the Black Knight’s on their heels.

Wade Fletcher took over for the last two outs and walked Dustin Crum to load the bags full of Rebel runners. He then adjusted on the mound and struck out Tucker Brown to put all the pressure on Hayden Hartman coming to the plate.

Hartman went down swinging on a strike three call as Chuckey-Doak would outlast the Rebel’s comeback to prevail 5-2 over their visiting rivals.

“They’re a great team. They just know how to pitch against us, and they know how to play us,” Coach Willett said about the tough Rebels pitching they faced.

Both teams square off again on Friday afternoon for the last game of their season series in Lower Afton.