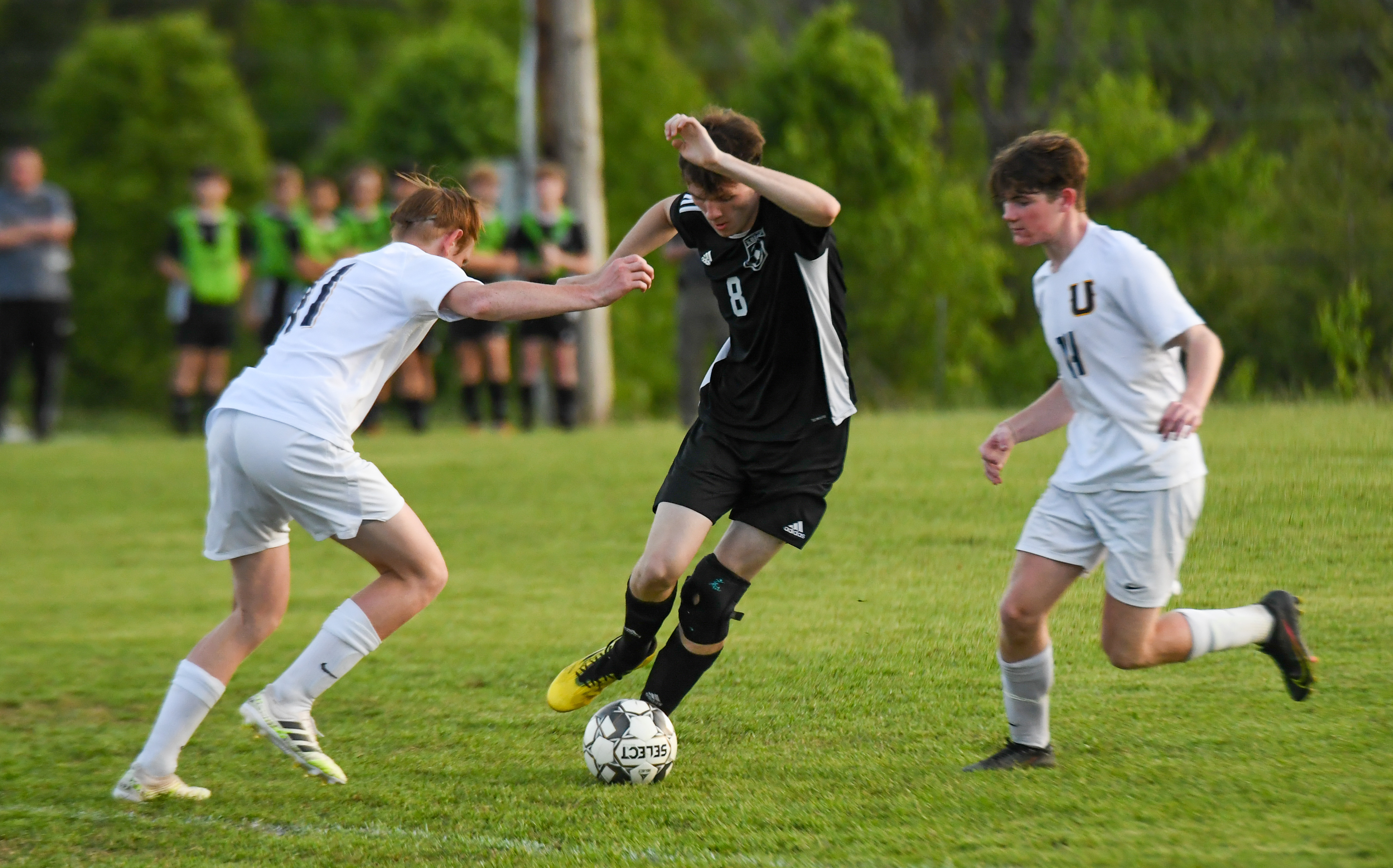 The Chuckey-Doak soccer team could not find enough offensive firepower on Tuesday night and fell to University High 1-0.

“They just played with a lot more energy than us,” Chuckey-Doak coach Cory Braithwaite said. “Really the only quality part of the game where we had 11 players with more energy than the University High players was the last five minutes. If we play with that urgency the whole time we are probably winning.”

With the loss the Black Knights also dropped a chance to take the top seed in next week’s District 1-A Tournament, and the automatic spot in the region tournament that comes with it. University High will now be the top seed, West Greene is second and Chuckey-Doak third.

Chuckey-Doak will play at West Greene on Tuesday, May 10 in the district semifinals.

“We just have to put everything together,” Braithwaite said. “We’ve faltered the last couple of games, but hopefully we can put it together in the playoffs. Hopefully we can come out with that heart, that want and get it back at West Greene.”

University High’s lone goal of the day came in the 22nd minute on only its second shot of the night. The Buccaneers lobbed up a pass from the right of the goal to Able Pate along the left post.

Pate leaped with his back to the net and flipped to meet ball with a perfect bicycle kick that slipped inside the post for a 1-0 lead that stood the rest of the night.

Outside of the unlikely goal Chuckey-Doak’s defense stood strong most of the night and limited the Bucs to just seven shots on Tuesday.

“I thought (goalkeeper) Levi (Wirt) played a lot better today than maybe we have seen in the last couple of games,” Braithwaite said. “Tyler Morrison sat on the post on a corner kick and saved one that was going in. The defense played well and they really only had one good opportunity in the second half.”

After Pate’s shot went in the Black Knights had four opportunities on corner kicks in the first half, but none of them led to a shot opportunity for Chuckey-Doak.

Chuckey-Doak’s best scoring chance of the first half came in the 31st minute. Roberto Vazquez broke away from the defense and went one-on-one with keeper Sam McGee, but his shot from 10 yards went wide to preserve the Bucs’ shut out.

University High had its final dangerous opportunity in the 46th minute when Braden Williams got loose and launched an open look from the top of the box. Chuckey-Doak keeper Levi Wirt was able to stop the shot to keep the Knights within striking distance.

In the 60th minute Josue Benitez sent a long pass ahead to Ethan Wagers who found an open look for Chuckey-Doak, but he sent his shot right at McGee in goal.

In the final five minutes the Knights really turned up the pressure and got a few of its best chances of the night. First Tyler Morrison found space on the right side of the frame, but his shot sailed high.

In the 77th minute Ethan Grindstaff used some fancy  footwork to get through a trio of defenders and finished with a stutter step that opened up an alley, but the shot did not make it past McGee.

In the 78th minute Grindstaff sent a perfect pass ahead to Marco Rojas who moved into the box and fired a shot from 10 yards that looked as though it beat McGee, but it was just wide of the post.