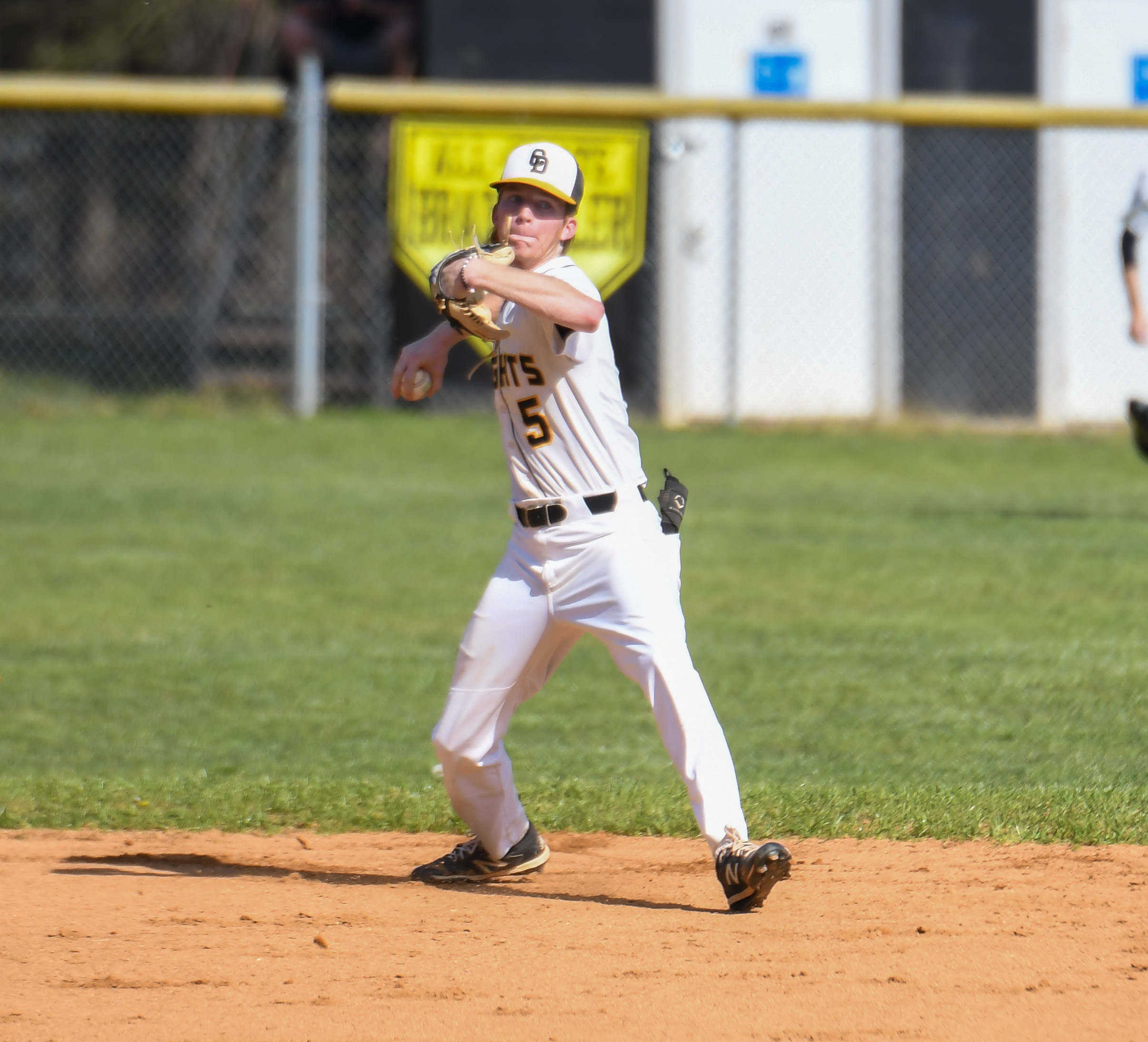 The Chuckey-Doak baseball team remained perfect in District 1-2A play with a 5-1 win on the road against county rival South Greene Monday afternoon.

“We could’ve adjusted better in the batter’s box. Come up in front of the plate and catch that curveball early. We never did take off with our bats today. We had a few sporadic hits but not like we’ve been doing,” Black Knights Coach Jimmy Willett mentioned. “They had two good pitchers and we struggled with slow pitching.”

The Black Knights were aggressive on the base paths early and set the tone in the top of the first frame. Jaylen Willett took a third strike swinging but Austin McBurnett stole the Rebel’s attention and sprinted over to third safely as Willett took first base.

Wade Fletcher took a ball on a 3-2 count and his patience in the box led to Jaylen Willett walking home from third to score the first run of the ballgame.

South Greene's Jesse Lawing let a ball pass by him at the plate but a fortunate bounce allowed him to swipe the arm of Luke Myers and get the third out.

Brendan Lisenby led off for the Rebels and grounded out on the first pitch thrown by Christian Derry. Nate Lisenby and Dustin Crum were Derry’s next victims and were sat down with strikeouts to get Chuckey-Doak out of the inning cleanly with a 1-0 lead.

Christian Derry kept burning through the second frame and struck out the first two batters he faced. Dillon Shelton would flash some leather at third and dive to catch a foul ball and retire the side in order.

Shelton did his job in the box also and boosted Chuckey-Doak’s lead to 3-0 after a two-RBI single led Willett and Luke Myers across the plate.

"Dillon’s solid. He’s a player. He’s always up and he’s always happy,” Coach Willett said. “He’s somebody you want on your team. He keeps them up and he loves the game. He’s gonna do big things if he keeps with it.”

Datyn Bowman laced a liner down the left field line in fair territory and punched in another run with Dillon Shelton sprinting from first to score. Bowman turned that swing into an RBI-triple once he reached third safely on a slide.

Once South Greene got back up to bat, Cody Rambo sent a grounder through the right side of the infield for the Rebels first hit.

Rambo came up huge on the defensive end the following inning with an off-balance leaping catch to sit Willett down with an out.

Hayden Hartman battled hard with Christian Derry and drew a walk in the end to win the battle. South Greene would still struggle to find anything to work in the batter’s box and Jesse Lawing would end the inning with a strikeout to Derry.

The Black Knights would still hold a 4-0 lead after four innings played.

Chuckey-Doak got some of its best power swings during the fifth inning. Connor Lamons drove a ball deep into left field but didn’t have enough behind it to clear the fence.

Wade Fletcher smashed a hard-hit ball to centerfield that dropped through T.J. Buckner’s glove and put the senior on third base.

Fletcher would come to the plate to score after Shelton grounded out to first. Derry would hop back on the mound with the Black Knight’s leading 5-0.

Derry proved to be locked in and focused on the task at hand by striking out Buckner and Alec Jones to force South Greene to head back on the field with another zero on the scoreboard.

“Christian was great. With him up there I have a good solid team behind him a probably going to be playing our best ball when he’s on the mound,” Coach Willet stated.

Nate Lisenby would respond and do the same on the mound for the Rebels in the top half of the sixth.

Dillon Shelton stepped up to close the game for Coach Willett’s squad.

Jesse Lawing took a fastball to left field for a fair ball and put himself on base with a single. Steals of second and third base would pump a little confidence into the Rebel’s dugout.

South Greene would ruin the shutout after Rambo reached safely on a walk and steal of second base allowed Lawing to sprint home safely with a double steal that claimed a run.

Shelton regained his composure to strikeout Jones to end the game for another Black Knight win by the score of 5-1.

Coach Willett mentioned, “We’re sitting good now. Christian gets us through this Monday, and we go into Tuesday with a lot of great pitching left. And that means a lot when you have Christian take care of Monday.”

Both teams will play the second game of the series tomorrow afternoon at 5 P.M. in Lower Afton.