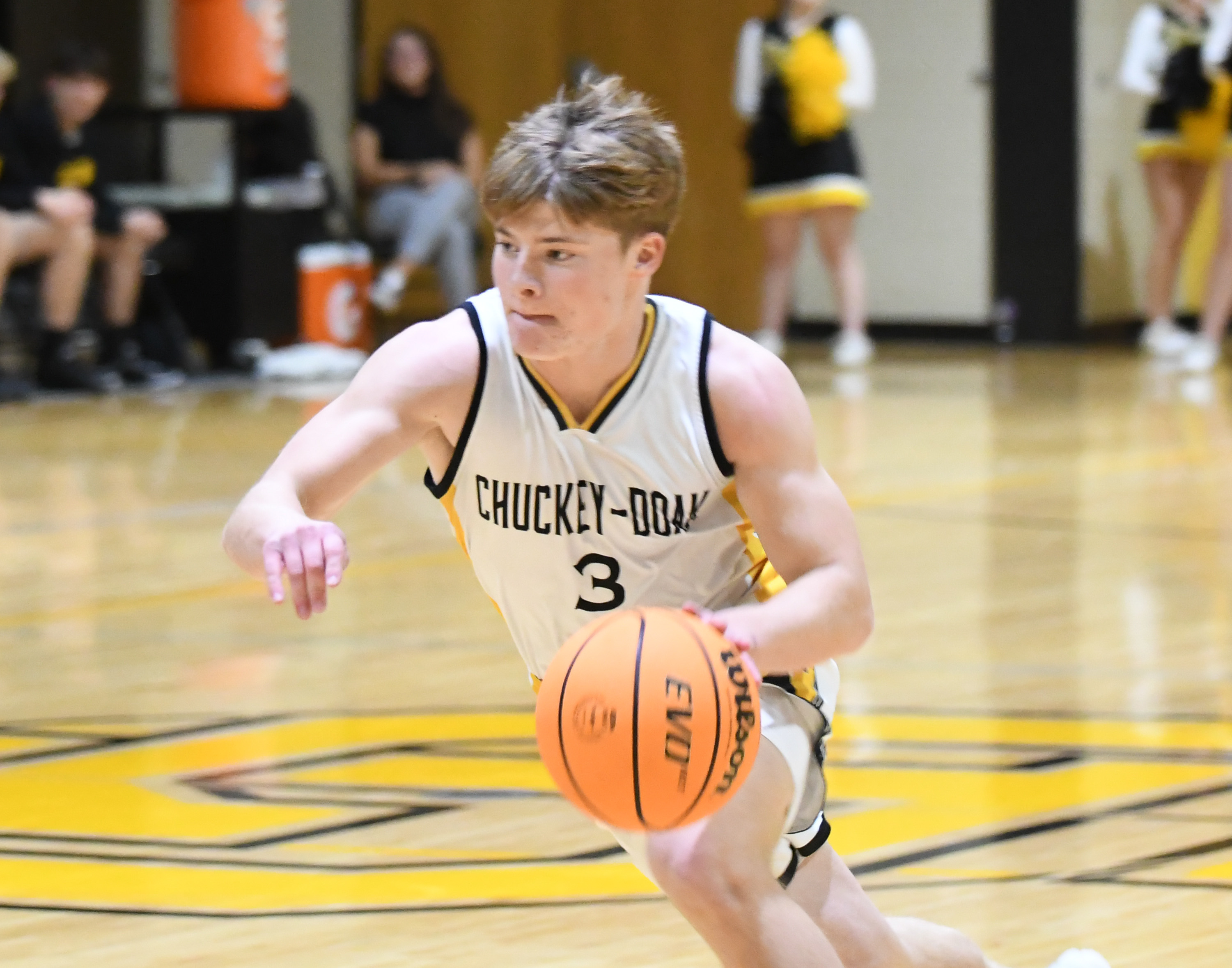 It was not easy, and the Chuckey-Doak boys even trailed at halftime as Cosby did all it could to slow down Christian Derry, but the rest of the Black Knights stepped up and carried the team to a 67-51 on Saturday.

Derry got the Knights on the scoreboard first with a put-back and then knocked down a three from the elbow for a quick 5-0 lead. Tullock made it 8-0 with a triple from behind the arc but the Eagles inched back to only trail 10-6 at the end of the first quarter.

The Eagles call themselves the Bang Bang Bird Gang, a name that dates back several generations and they lived up to that name in the second quarter knocking down five three pointers, three by Peyton Raines and two by Shayden O’Dell.

Cosby took a 12 point lead at 31-19 when Raines sank a triple from the corner with 55 seconds showing on the clock. Derry hit a layup and with 16 seconds left and Treadway hit a shot to cut the lead to 31-23 at the half.

After some sluggish and back and fourth play Treadway beat the buzzer with a short jumper but the Knights were still down one heading into the final quarter 46-45.

It didn’t take long for Chuckey-Doak to take the lead, Derry scored from down low and Luke Myers gave a spark to the Knights with bucket from about 12 feet out followed by two free throws.

Tullock was fouled on a three-point attempt, the shot was off the mark but he hit all three free throws and the knight had a 57-46 lead at the 4:45 mark. From there the Knights were in control and hit the free throws down the stretch for a hard earned win.

Chuckey-Doak coach Sam Broyles” they got hot, but we kept missing layups, we missed six layups in the first half, I told the guys at halftime we’re beating ourselves, if we come out put the ball in the hole and play defense we can match up and win”.

Defense again made the difference for the Chuckey-Doak girls on Saturday as they used it to propel their offense on the way to a 65-36 win over Cosby.

Chuckey-Doak coach Kyle Donahue said “Defense! We talked about it yesterday, we have to let our defense turn into offense and I thought we did that pretty well, I couldn’t be more proud”.

The Lady Black Knights opened the evening with a 7-0 run on the visiting Lady Eagles from Cosby. The run started with a steal by Taliah Johnson and she drove to the basket for the first points of the game.

Moments later Johnson found Hayleigh Taylor under the goal for two. Johnson hit one of two free throws and Kennedy Brown hit a pair of free tosses as the Lady Knights went up 7-0 midway through the first period.

Cosby came storming back and tied the game at 9-9 when Shylee Shelton sank a triple from the corner and then took a 12-9 lead with 22 seconds left with a three from the top of the key by Chole Hance.

Tavyn Southerland hit two free throws with 12 seconds to play but Madylyn Bible just beat the buzzer with a put-back and the Lady Eagles led after one quarter 14-11.

The Lady Knights quickly tied the score and took a lead when Faith Yokley scored on consecutive possessions, then after unsuccessful possessions by both teams Yokley stole the inbound pass for an easy two points and an 18-14 advantage. The Lady Knight controlled the remainder of the half and increased the lead to 28-19 when Brown hit a layup at the buzzer.

Chuckey-Doak took the lead to double digits when Brown sank a short jumper that made it 31-19. The two team almost matched each other shot for shot for the rest of the quarter and the lead belonged to the home team at 43-32 heading into the final stanza.

To start the fourth quarter the Lady Eagles were still within reach, but the Lady Knights put an end to any chance they might have had with buckets by Southerland and Johnson. Then the dagger was a three from the elbow by Saniah Atchison, and the Lady Knights were up 51-35. The Lady Knight defense only gave up four points in the final frame and went on to victory with a score of 65-36.