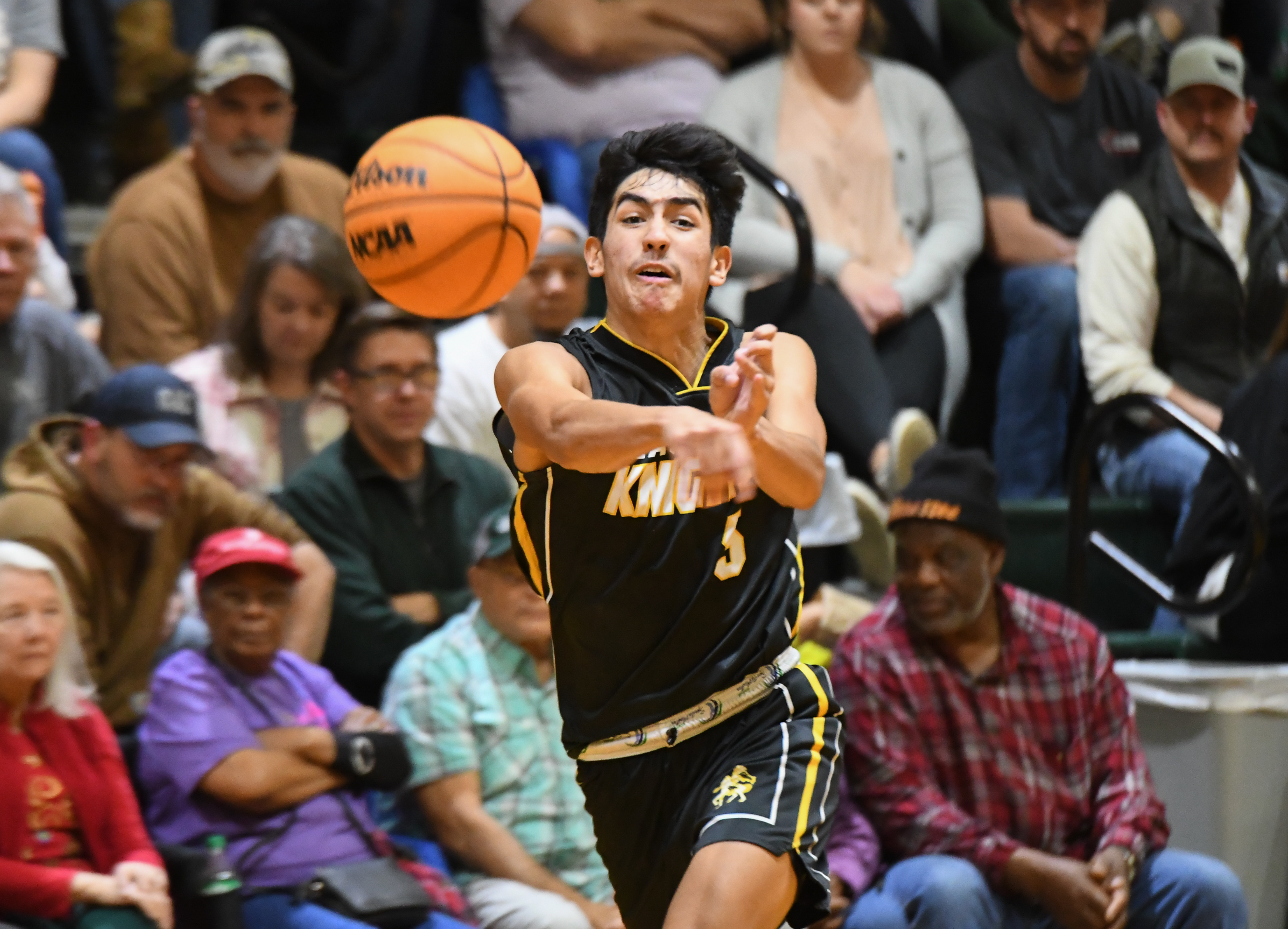 ROGERSVILLE - Chuckey-Doak broke open the floodgates in the second half to pull away to a 67-50 victory over the homestanding Cherokee Chiefs on Friday night.

“They played a great first half and stayed with us,” Black Knights Coach Sam Broyles said. “We haven’t been in a lot of close games and I thought we responded well.”

Cadin Tullock had another great night leading the Black Knights in the scoring category with 24 points. Tullock recently relinquished point guard duties to Isaiah Treadway and looked very comfortable in his new role on the court.

“It puts him in the middle of the floor and he’s got more freedom to move around. It makes it harder for defenses to guard him because if every team we play thinks he’s the one bringing it up then their design is going to be to stop him. But now he can play multiple positions and it makes us better,” Broyles stated.

The game started off with Christian Derry powering his way inside with two points on an easy shot close to the rim.

Elisha Jones carried the load early for Cherokee and worked his way inside for a layup then blocked Dillon Shelton’s shot attempt on the opposite end of the floor moments later.

Shelton responded well though with five-straight points on a free-throw line jumper and a triple in transition. Ethan Grindstaff dished out a quick assist to Tullock for a layup and Derry’s block on defense led to another transition layup for Tullock.

The Black Knights jumped out to a 13-4 lead early in the first.

Cherokee held them scoreless for the rest of the quarter and found offense through Bryce Elliott’s layup and Will Price’s running floater to cut their deficit down to 13-10 at the end of the first quarter.

Derry had one of his best nights defensively in his time at Chuckey-Doak on Friday night. He started the second quarter with another block that tallied as his fourth block only nine minutes into the game.

“That’s the best defensively he’s played. He got out on the three-point shooters, he got back in and helped on the drive, and that’s what we want out of him. When he does that, it makes a world of a difference,” Broyles mentioned.

The second quarter was a back-and-forth affair and ended up being Cherokee’s most successful and highest scoring frame of the night.

Will Price cut the deficit down to one with a layup. Then Derry expanded his range with a long two-point jumper on the baseline, but Colton McLain and Elisha Jones both nailed threes to knock it back down to a one-point game at 19-18.

Tullock’s three-point bomb helped the Black Knights pull back ahead by four.

Chuckey-Doak finished the quarter strong and led 30-26 at the break.

Elisha Jones busted open the gates of the second half with a three-point bucket to almost immediately cut the game back down to one point.

The Black Knights caught fire and used three-straight layups from Tullock, Shelton, and Grindstaff to pull back ahead 36-29 only a minute later. Grindstaff put the lead back at a double-digit margin with a three-pointer out of a Cherokee timeout.

This run was the difference maker in the game and allowed the Black Knights to break away from the tribe and control the scoreboard throughout the remainder of the contest.

Chuckey-Doak had managed to pull away and take a 47-32 lead after the third quarter. Cherokee only mustered six points in the frame.

The perimeter defense from guards Ethan Grindstaff, Isaiah Treadway, and Luke Myers caused a disruption for Cherokee in the second half and held Colton McLain to only six points on the night.

“Treadway played lights out on McLain in the second half. I thought he really shut him down. He’s probably their best player,” Coach Broyles mentioned. “It’s the same way with Ethan Grindstaff and Luke Myers coming in. Those three defensively make it hard for a team to score.”

Tullock added a quick layup to provide extra comfort to their lead.

Bryce Elliott stripped Isaiah Treadway at half court and assisted Parker Travis for a layup at the rim.

Luke Myers was a big contributor in the fourth quarter with a bucket and an assist to Derry in the paint. Myers and Derry both added late layups to keep the engine running all the way to the finish line.

Chuckey-Doak would come out on top once again 67-50 to pull off the season sweep of the Chiefs.

Elisha Jones poured in 18 points for Cherokee followed by 10 points from Bryce Elliott.

Chuckey-Doak held off a late charging run from Cherokee in the final minutes on Friday to go home happy with a 53-49 road win.

The girls from Lower Afton didn’t have to pull off a 14-point comeback in the final minutes this time around. There was less drama, but the game still came down to the wire in the final moments.

Head coach Kyle Donahue was absent in tonight’s game and assistant coaches Nicole Riddle and Erica Maupin stepped up and took control for a night led the Lady Black Knights into a satisfying win in the end.

The Lady Knights avoided the press on their first possession and got a bucket to fall through an offensive put back from Hayleigh Hensley.

McDavid and Hensley were each team’s main source of offense in the first by scoring each of their teams first two field goals of the contest. Hensley tied the game at 4-4 with a basket in the low post on an inbounds play. McDavid came right back with a layup seconds later to regain the lead.

Cherokee held a thin 8-7 lead after one quarter of play.

Kyla Howe stood wide open in the corner and put in a transition three and beat the defense down the floor following a Chuckey-Doak turnover to put in a layup. The Lady Chiefs lead quickly grew to 15-7 two minutes into the second quarter. The eight-point deficit would be the largest Chuckey-Doak faced on Friday night.

After McDavid sped through the lane for a layup, Kennedy Brown added a layup of her own on a fast break with a foul added on. She’d convert the three-point play and add another free throw on her next trip down the court to cut the lead down to 17-11. A few moments later, McDavid and Brown traded triples on back-to-back possessions.

Chuckey-Doak would fall behind and trail 23-16 entering halftime.

Hayleigh Taylor cut the deficit down to five out of the half by grabbing her own miss and used the glass to gain an easy two points. A forced turnover by the Lady Knight defense gave Kennedy Brown an open floor in front of her for a quick transition lay in.

Chuckey-Doak would quickly work their way back to tie the game at 24-24 with two inside baskets from Taylor and Hensley.

McDavid would finally get a field goal to go down for Cherokee through a layup to even the score again at 26-26.

Cherokee would receive a five-point swing from Macy McDavid to end the third quarter and cut the score down to 36-31 entering the fourth quarter.

Taliah Johnson and Saniah Atchison poured it on from behind the arc and splashed a three-point basket each to give the Lady Knights a quick spark.

The Lady Chiefs would quickly storm back to make a run for the lead following a three-point bomb from Bella Markham and another three-point play from McDavid cut the score down to a three-point game. Emma Mowell found a way to knot the score at 44-44 with a layup in the paint.

Saniah Atchison’s clutch bucket with a little over two minutes remaining in the contest sent Chuckey-Doak back into the lead and proved to be a momentum shifter in the closing moments.

Atchison and Johnson made a free throw each at the line to extend the lead to a six-point margin, but a high bank shot from outside the perimeter from Bella Markham cut the score to 50-47 with 23.5 seconds on the clock.

The Lady Knights would begin to have trouble at the free throw line with Atchison missing two and Hayleigh Taylor going one-of-two to allow Cherokee to pull back within two with six seconds remaining. Chuckey-Doak’s Taliah Johnson clutched up at the line with 0.6 seconds remaining and iced the game with two free throws to help preserve a 53-49 win over the Lady Chiefs.

Macy McDavid tallied a game-high 19 points for the Lady Chiefs.