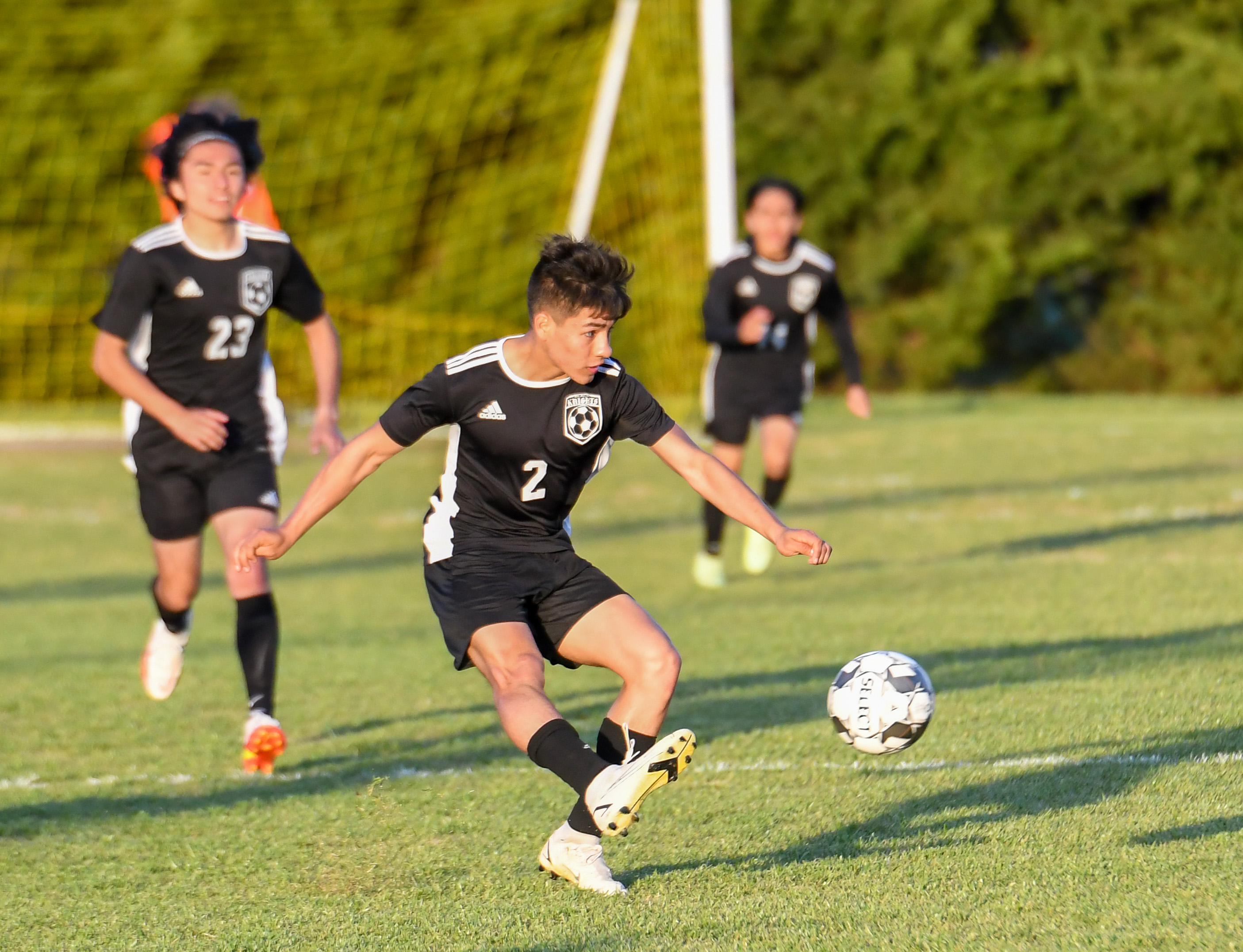 Led by a hat trick from Marco Rojas the Chuckey-Doak soccer team put its fate in its own hands on Friday afternoon after gaining a 5-1 victory over West Greene.

The Black Knights can secure the top seed in the District 1-A Tournament, and the automatic berth in the region tournament that comes with it, if they can beat West Greene and University High in their final regular season meeting.

“It feels good. Normally it’s not in our hands and it is at the moment so hopefully we will take it one step at a time and keep it that way,” Black Knights Coach Cory Braithwaite mentioned.

Both teams got their share of control time throughout the first 10 minutes of play, but the Black Knights would be the first to capitalize and struck in the 13th minute.

Chuckey-Doak drew first blood after Roberto Vazquez set Rio Little up with a shot from straight on that passed by Hunter Gregg and touched the back of the net for Chuckey-Doak’s first goal of the evening.

“I think Rio is one of the best defensive midfielders that I’ve had the pleasure of coaching. He’s sound technically. He’s getting better every day tactically playing that position,” Coach Braithwaite said. “Him and Roberto are working better and better and that’s been our philosophy for the last month or month and a half. If we improve every day, we’re happy.”

Coach Braithwaite also spoke highly of his senior leader in the midfield who was credited with the assist. “Roberto brings a lot. He gives us energy in the middle. I’ve worked on him since he was a freshman to pass the ball more and it’s finally starting to click,” Braithwaite mentioned.

Ethan Grindstaff dribbled around a defender to get a clean shot off in the box but leaned back too much and sent it flying over the crossbar.

Blair Shelton took a shot on goal during a free kick near midfield but wouldn’t put any points on the board for the Buffaloes.

Rojas showcased his speed on a breakaway goal in the 23rd minute that put some separation between both clubs. Levi Wirt’s punt from the opposite goal bounced over a few defenders’ heads and set up Rojas with a clear field of grass and nothing but the goal ahead.

Rojas would not have to wait long for another opportunity to strike again. A goal in the 33rd minute off the striker’s heel added more cushion to Chuckey-Doak’s lead and put the Black Knights ahead 3-0.

Roberto Vazquez’s hustle and desire to score paid off with a header four minutes later that would force the Buffaloes to go into halftime with a 4-0 deficit.

West Greene returned from halftime and received a crucial save from Erik Ramirez at the goal line. Vazquez slipped a shot by Gregg in the goal and Ramirez hustled to boot the ball away before crossing.

On the opposite end, Daniel Cicero couldn’t find any luck up close and had one shot blocked by Wirt and a bicycle kick attempt bounce off the post. He finally caught a break in the 61st minute and saw the ball touch the back of the net for the Buffaloes only goal of the evening.

Ethan Grindstaff found himself with a chance to score in the 66th minute but a bad angle caused the shot fall out of bounds.

The Black Knights weren’t finished yet as Rojas turned a pair of goals into a trio to earn a hat trick in the 76th minute of play to ice Chuckey-Doak’s win.

“I thought Marco played excellent today,” Coach Braithwaite stated. “I will always say that all of them can play better. We can communicate better, make better passes, we can shoot better, but he was kind of on point today.”

Chuckey-Doak never let off the gas and continued to punish West Greene until the end, earning a 5-1 win on their home turf.

“They’re going to come out hard on Tuesday and we have to be ready,” Coach Braithwaite stated. “I think we’re very even. I don’t know if the score reflects the quality of their squad here today and it could easily be the opposite on my opinion. So, we just have to stay focused.”

Both teams play the second game of their season series on Tuesday afternoon on The Range.