Black Knights Bounce Back With Win Over West Greene; Lady Knights Use Defense To Earn 50-24 Win 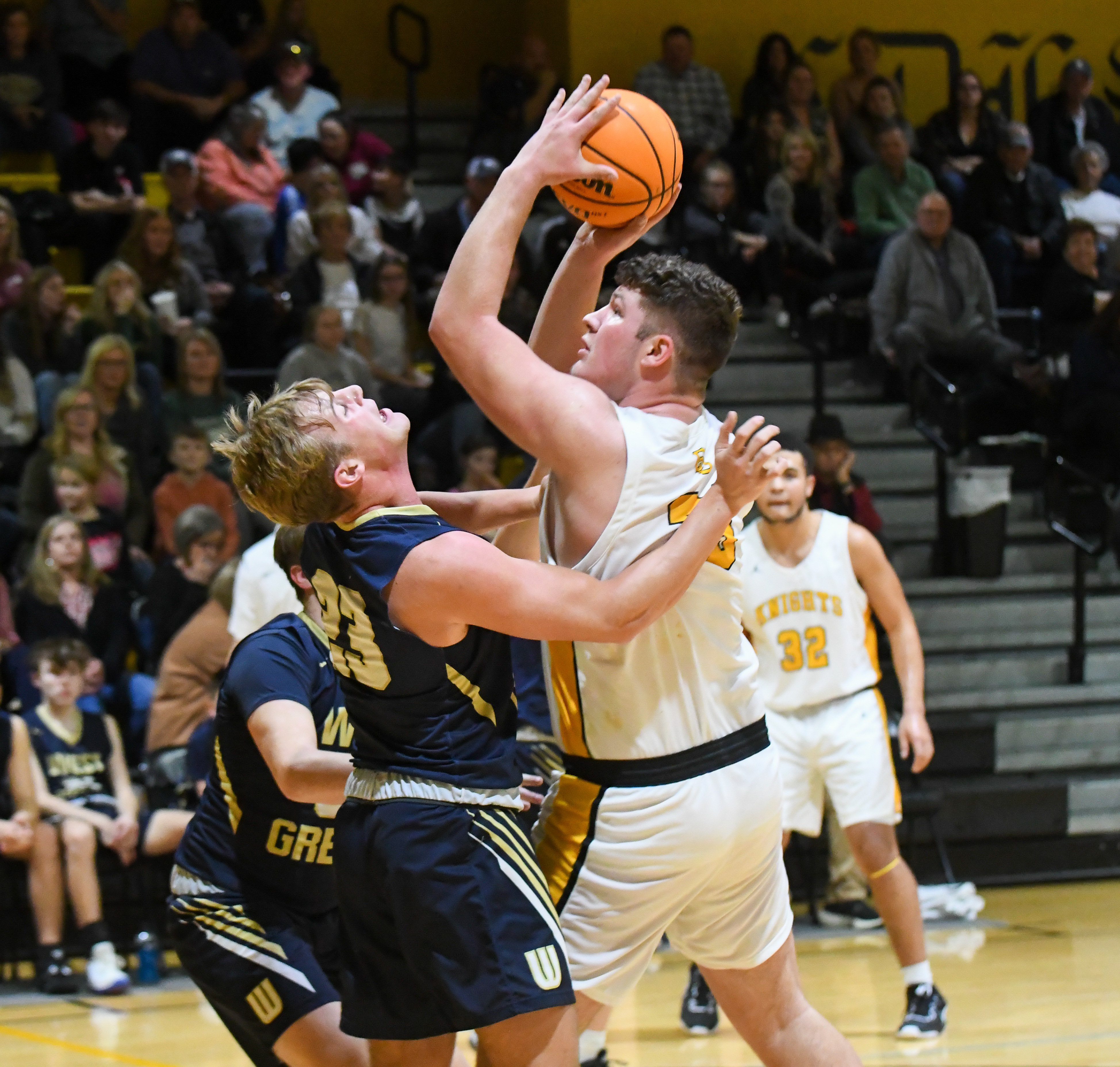 Black Knights Bounce Back With Win Over West Greene; Lady Knights Use Defense To Earn 50-24 Win

In its second rivalry matchup of the week the Chuckey-Doak boys bounced back on Friday night and took down West Greene 74-63.

Just three days after taking their first District 1-2A loss of the season to South Greene the Black Knights got back on track by completing the season sweep of the Buffaloes.

“It was tremendous to see the guys bounce back, and I appreciate their effort tonight,” Chuckey-Doak coach Sam Broyles said. “They had that desire to come back after a hard loss in which we got outplayed every which way. We needed to get back at it, and it was very important to get a win tonight. Now we have turnaround and do it again tomorrow.”

The two teams traded points in the opening minutes, but Chuckey-Doak was able to take the lead at the charity stripe. First Dillon Shelton made two free tosses and then Isiah Treadway made one to give the Knights a 7-5 advantage. Chuckey-Doak then played from in front for the final 26 minutes on Friday.

Christian Derry closed the quarter with a turnaround jumper from the block in the final seconds to give Chuckey-Doak a 13-9 lead.

“Christian can’t let people push him around, and that’s what everyone is going to try to do,” Broyles said. “They are going to do anything they can to stop him, but I thought he played with composure tonight and he really played well.”

Cadin Tullock started the fsecond quarter with a three-pointer for Chuckey-Doak and then stretched the lead to 20-12 when he knocked down a pull-up jumper from the lane.

Leyton Frye was able to put in six straight points for West Greene to close the gap to 26-21, but Chuckey-Doak answered with buckets from Tullock and Brasen Murvin to stretch the lead to 30-21 at halftime.

Derry scored the first four points of the second half and then Ethan Grindstaff turned a steal at midcourt into a breakaway layup for a 38-23 West Greene lead.

After four more points from Derry the lead grew to 46-27 when Treadway took a steal the other way for an easy bucket.

West Greene got three-points the old-fashioned way from Mason McCamey before Conner Campbell sank a triple from the corner. Tullock followed with a jumper from the short corner and a lay in for the Knights before Brock Rush sank a free throw to give Chuckey-Doak its biggest lead at 53-33.

The Black Knights took a 55-39 lead into the fourth quarter.

In the fourth quarter Frye tried his best to bring the Buffaloes back into it with 13 points in the period, but Derry answered with eight points for Chuckey-Doak to keep the Black Knights in front.

Frye led all scorers on Friday with 29 points while Tullock was also in double figures with 17 points for the Black Knights.

The Chuckey-Doak girls turned in an impressive defensive effort on Friday night to pick up a valuable District 1-2A win over rival West Greene.

The Lady Black Knight pressured the ball for the length of the floor and were quick to turn turnovers into points on the way to a 50-24 win.

The win gives Chuckey-Doak the season sweep over the Lady Buffaloes in district play, which keeps the Lady Black Knights in second place in the district behind South Greene.

“We wanted to get back to us tonight,” Chuckey-Doak coach Kyle Donahue said. “We felt we got away from who we are against Unaka and South Greene. We wanted to jump on them early and put the pedal down. This was a huge win for us. We talk all the time about having to win your home games and then steal some on the road. Right now we’re the two seed and we still have a shot at the one seed, but we need to continue to push.”

Chuckey-Doak now leads what has become an extended season series with the Lady Buffaloes 3-1 after the teams also met in a pair of holiday tournaments.

Friday’s action started with West Greene taking the first lead at 5-2 behind a three-pointer from Kinsley Ellenburg and a layup from Maddie Bryant.

The Lady Knights then settled in on defense and made sure nothing came easy for West Greene the rest of the way. That tough defense also turned into points on the other end as Taliah Johnson started a 17-0 run by taking a steal the other way. Sanaih Atchison and Faith Yokley then each found Hayleigh Taylor out in front of the Lady Buffs for a pair of transition layups.

Atchison knocked down a triple and Adyson Ripley put in the final four points of the opening period as Chuckey-Doak grabbed a 17-5 lead.

The Lady Knights kept the pace of play fast in the second quarter and stretched their lead to 21-7 with layups in transition from Bri Lowe and Johnson.

Ellenburg was able to get another three-pointer to fall for West Greene, but Chuckey-Doak’s defense did not allow another point over the final five minutes of the first half.

The Lady Black Knights were very effective in using their pressure to not let West Greene get into its offense, but even when it got into the half court Chuckey-Doak played tough and made the Lady Buffaloes settle for difficult shots. Chuckey-Doak went into halftime leading 31-10, holding a team that scored 91 points on Tuesday to just 10 points in the first half on Friday.

“Defense is mindset, and this is the kind of mindset we want to instill,” Donahue said. “That’s how we want to play, we want to give maximum effort on defense and see it transition to offense. We knew we had a disadvantage size wise tonight, but we challenged the girls to play as big as we can, and make them shoot the shots we want. Then when they shoot we had to be more tenacious rebounding, and I thought we did that well.”

Chuckey-Doak did not score as frequently in the third quarter, but Johnson, Taylor and Kennedy Brown all turned steals into points as the lead grew to 41-12.

Hailey Ripley finished the period with five points for West Greene to narrow the margin to 41-17.

Chuckey-Doak’s biggest lead of the night came with 6:07 left in the game when Courtnee Jones put back a miss to make it 47-17.

Ellenburg hit another three-pointer for West Greene as part of her team-high 11 points and then Lady Buffaloes scored four points in the final 16 seconds to set the final score at 50-24.

Brown and Taylor each scored 10 points for the Lady Knights.

Friday marked Donahue’s return to the sideline after missing the past two games while attending to his sick daughter. Donahue expressed his gratitude to everyone across the county who has reached out to him over the last week, and those that have remembered his family in prayer.

“I just want to say thank you to all of the people that have been praying for us and all of the people that have been worried about Teaguen,” Donahue said. “The support had been overwhelming and not just from Chuckey-Doak. I think (West Greene coach) Betsy Shaw was one of the first people to text me when she found we were in the hospital. And for them to come out tonight in red shirts in honor of her blood disease, that was pretty classy.”